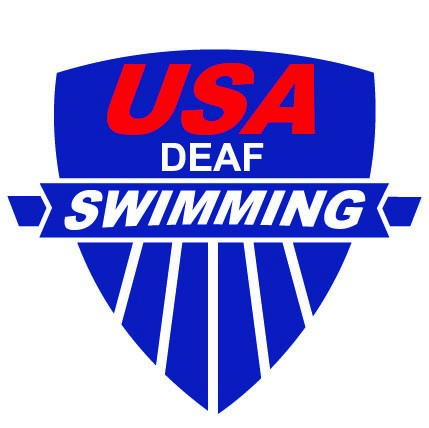 The USA Deaf Sports Federation recently announced the roster for the 2022 Deaflympics, which will take place from May 1- May 15 in Caxias Do Sul, Brazil. Stock photo via USA Deaf Swimming Logo

The USA Deaf Swimming Federation (USADS) has announced the full roster for the 24th World Summer Deaflympics. The competition will take place in Caxias Do Sul, Brazil from May 1-15, 2022. The Deaflympics consists of 20 sports, and will host 6,000 deaf and hard-of-hearing athletes from nearly 100 countries.

The Deaflympics are sanctioned by the IOC and are the highest level of world competition exclusively for athletes who are deaf and hard of hearing. They are held every four years on an alternating schedule with the Olympic Games. The 24th Deaflympics was originally scheduled for 2021 but got pushed back when the Olympic Games in Tokyo were rescheduled.

The USA’s Deaflympics Swimming Roster is made up of 12 athletes.

Emily Massengale competed in the 2017 Deaflympics where she earned 2 bronze medals. She also brought home 3 medals from the 2019 Deaf World Championships. Massengale currently owns the Deaf Swimming USA records in the 50, 100, and 200m backstrokes. She swims backstroke and IM and currently attends Lindenwood University in St. Charles, MO.

Collin Davis is currently a senior in high school. He represented the USA at the 2019 Deaf World Championships where he set the Deaf American Record in the 800m freestyle. He primarily competes in distance freestyle and backstroke events. Davis is committed to swim for the University of Wyoming for the 2022-2023 season.

The last Deaflympics were held in 2017 in Samsun, Turkey. In the swimming competition, Russia came out on top with 44 medals- 26 gold, 10 silver, and 8 bronze. The USA was fourth in the overall medal count with 3 gold, 2 silver, and 3 bronze for 8 total medals.

This year, Russian athletes will not be allowed to participate. The International Committee of Sports for the Deaf (ICSD) announced in March that they will be following the recommendations of the IOC and excluding athletes from Russia and Belarus from competition.

The swimming competition at the 2022 Deaflympics will run from May 2nd to May 9th. An entries report or psych sheet is not currently available.