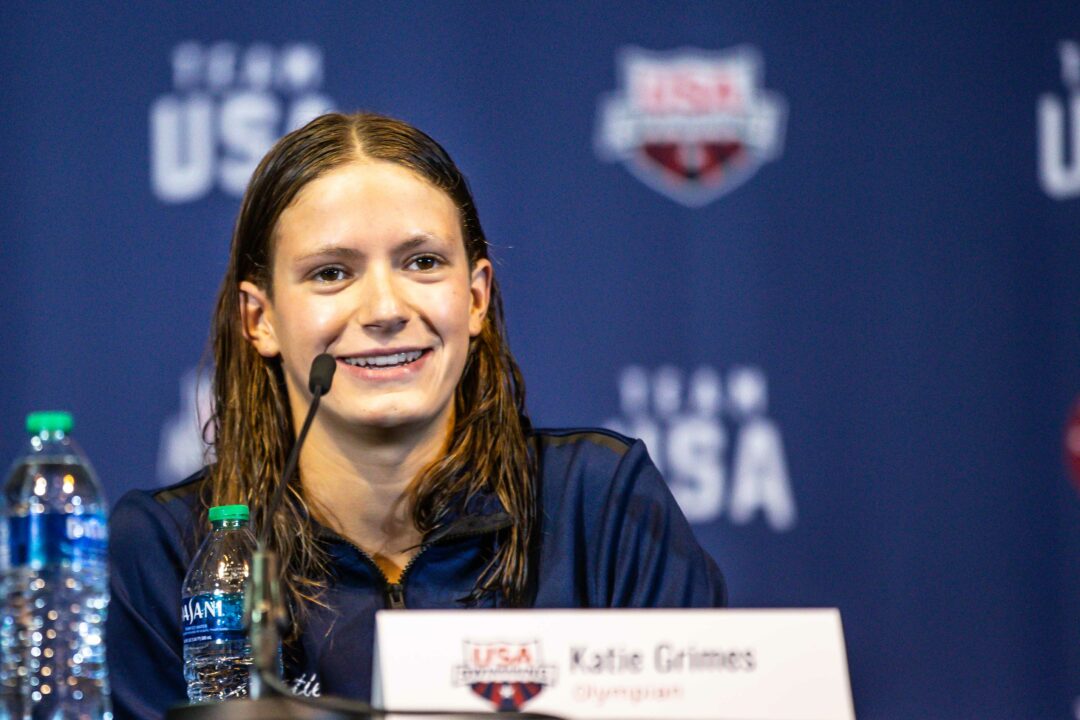 USA Swimming conducted a hybrid version of its Annual Business Meeting over the September 22nd to 24th weekend. Besides announcing Frank Keefe as the recipient of the 2022 USA Swimming Award, the organization also honored five coaches and athletes.

Open Water Swimmers of the Year

16-year-old Olympian Katie Grimes won the Female Open Water Swimmer of the Year Award. Grimes made her FINA World Open Water Championships debut in Budapest over the summer with a top American performance in the 10-kilometer race. A

A member of the Sandpipers of Nevada, Grimes’ fifth-place finish in a time of 2:02:37.2 was the second-best showing by an American in the event behind open-water veteran Haley Anderson.

Grimes followed her 10km performance with a dominant gold in the 7.5km at the Junior Open Water World Championships in Seychelles.

In the pool, the young superstar also claimed a pair of silvers at the 2022 Budapest World Championships in the women’s 1500 free and 400 IM.

21-year-old Florida Gators swimmer Brennan Gravley won the Male Open Water Swimmer of the Year Award. Gravley, who also comes from the Sandpipers of Nevada, tied for 10th in the 5km and placed 12th in the 10km at Open Water Worlds. He was the top-finishing American in both events.

Previous to these performances, Gravley competed at the 2019 Open Water Worlds in the 5km and 25km, placing 14th and 15th, respectively.

According to the organization, the purpose of this award is to honor coaches who made significant contributions to the inclusion of swimmers with a disability in USA Swimming programs.

Coach Stanton IV succeeds his father, Wright Stanton III, who was inducted into the El Paso Athletic Hall of Fame this year. For the last 16 years, Stanton IV has coached in El Paso, 12 of which he has dedicated to the Loretto Swim Team as part of the Southwest Aquatic Team.

USA Swimming hands out this award to honor a swimmer or relay team with a disability for the previous year’s outstanding performances.

Cronk set a new record for most gold medals earned in a single Deaflympic Games over the summer in Caxias do Sul, Brazil. She won 12 events by a large margin over her competitors. Not only did she take home a significant number of golds, but she also broke 3 deaf world records in the 1500 free, 200 fly, and 400 IM.

The Officials’ Committee voted Jacki Allender to be the recipient of the Kenneth J. Pettigrew Award for his 30 years of service as a swimming official.

Allender is on Oregon Swimming’s Board of Directors as the Safe Sport Coordinator. He also won the U.S. Masters Swimming Officials Excellence Award earlier this year.

Katie Grimes is tougher than you. Yeah I’m talking about you.

When is the OW meet in October? National team is selected off of it.