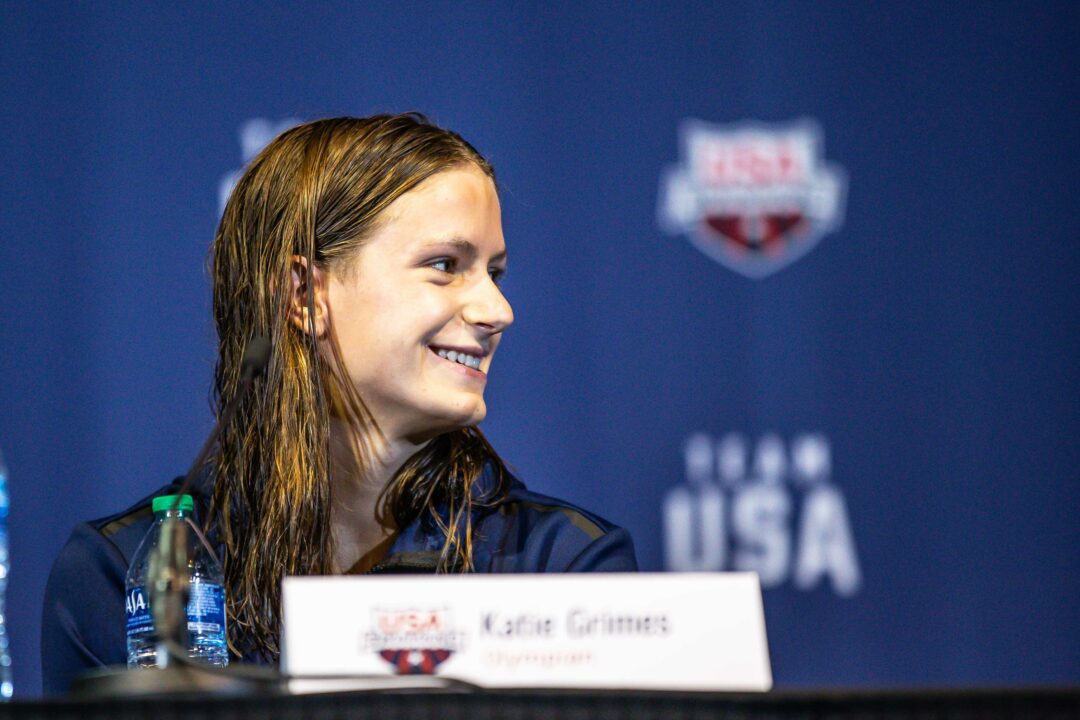 It’s an eerily quiet time in the world of swimming, as the championship meets of the summer have wrapped up and athletes are getting back into the swing of things for the school year and club season, meaning there’s a lack of racing going on.

But the World Junior Open Water Swimming Championships are doing their part to fill that void, as the three-day competition kicked off on Friday from the Seychelles, an island nation located in the Somali Sea (700 miles northeast of Madagascar).

The opening day of competition featured the 5k and 7.5k events, which were exclusively for swimmers aged 13-15 and 16-17, respectively.

In the girls’ 7.5k, it was an absolute tour de force from American Katie Grimes, who bulldozed the field with a final time of 1:22:38.50.

In open water, conditions dictate times, making it impossible to truly compare someone’s clocking from one competition to another. However, we can look at margin of victory, and Grimes’ was significant.

The 16-year-old led runner-up Narin Burcunaz of Turkey by a full two minutes and 18 seconds, or nearly two seconds per 100 meters.

Granted, Grimes has experienced success at the highest level of the sport, including a pair of silver medals at the 2022 World Championships in the women’s 1500 free and 400 IM, while her competitors in Seychelles are still on the way up. But nonetheless, this open water effort was impressive.

Day 1 podiums with a lot of shiny medals and big smiles 💪🥇🥈🥉#openwater pic.twitter.com/Y02UZVXPDJ

However, the times across the board on Day 1 were incredibly fast—Claire Weinstein‘s winning time in the girls’ 5k averages out to 1:02.2 per 100 meters, and the top boys in the 7.5k averaged sub-1:01 pace.

For comparison, Grimes finished in 1:41:44 when she won the 7.5k at U.S. Nationals in April (in tough conditions).

It’s possible the courses are a bit short, given these results, but that doesn’t take away from Grimes’ dominance.

Post-race, Grimes said the conditions weren’t optimal, but she managed to maintain her poise and execute a successful race.

“I didn’t come in with too much of a tactic; I just didn’t really know what to expect at the junior worlds,” she told FINA. “Every day we’ve been out here before, the conditions have looked like a lake and today it was pretty rough, so I just really went with the flow of everything and stay calm.”

Well, the day after – on the same week – David Bethlehem won the 10km on the same championship by a margin of 4.33 minutes – double margin than Katie’s one. How do you call than that swim?

you mean after this article was posted?

The open water adult competition is probably the only one where Katie Grimes has chances for the gold medal. Everywhere else where she is really good she has to compete with extremely talented swimmers.
She surprised us with showing up in 400IM and her 4:32 was very impressive by nowadays standards. But Summer came with 4:29 and all hope vanished. I can’t imagine Katie switching her focus in training on breaststroke. And without that there would be no progress in IM competition for the gold medal. Open water is much easier and more awarding.
In contrast to another Katie who doesn’t try herself in open water and even avoiding short course meets, Katie Grimes competes everywhere.
At… Read more »

Who are you? At least share your credentials. Your thoughts and advice are continually making people dumb and dumber.

Really nobody. Just some guy who likes sharing his thoughts and advices when nobody are asking for them. 😀

The objective for USA Swimming is to maximize the medal haul at major international competitions. It’s about TEAM.

I had hoped FINA posted the splits at the 2500 meter mark and the 5000 meter mark on the results summary but to no avail.

At the age of 16, Katie Grimes is a machine.

As for not too early predictions, Katie Grimes will qualify in the women’s 200 meter freestyle relay with a top six time at the 2023 USA Swimming International Team Trials.

Does anybody know what her training is like? How much does she train in open water?

I find all open water swimmers super impressive (I like walls! The more the better!) but especially when they’re also really good in the pool.

I am on the other side of the world to Katie (so, no direct knowledge of her routine) but I feel 45-50 miles/week would be a normal week for her and almost all of that would likely be in the pool. Openwater swimmers that train in pools often have more than 1 athlete in a lane (say 2 or 3 athletes across) to simulate the “pack swimming” of Openwater.

At least, that is what happens here in Australia.

Impressive winning margin by Katie at this World Junior Openwater but I must admit it come as no surprise to me, super impressive athlete 👏👏👏.

A truly impressive swim! I’m excited for her future in both open water and the pool.