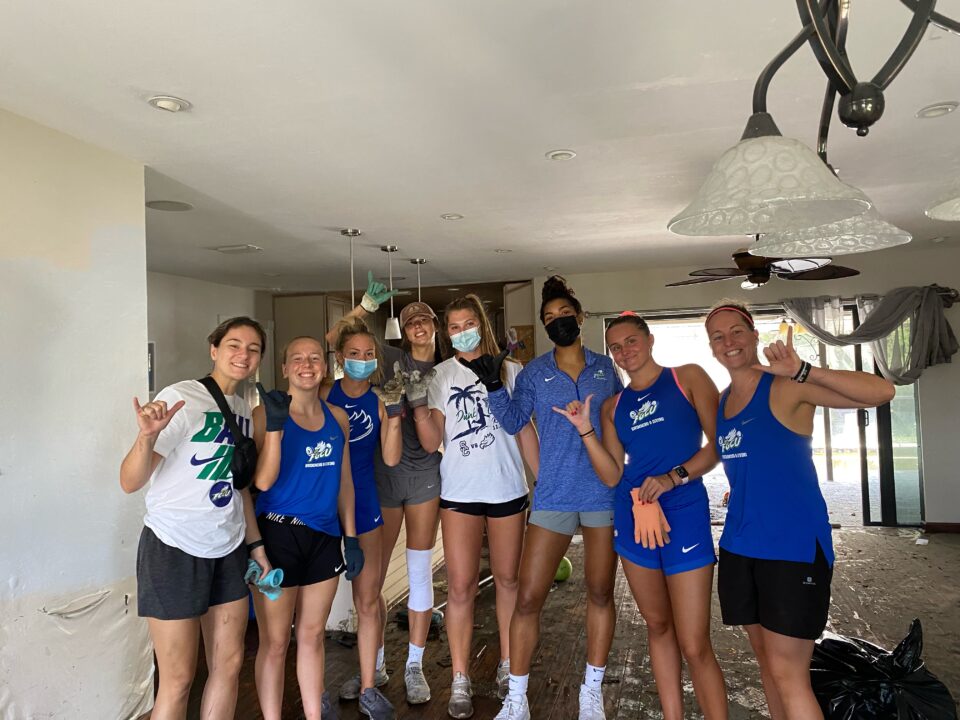 FGCU Head Coach Dave Rollins talked to SwimSwam about the aftermath of Hurricane Ian, including how swimmers are helping rebuild their community. Current photo via Dave Rollins

I called Dave Rollins, head coach at Florida Gulf Coast University (FGCU), on a Tuesday afternoon, four days after Hurricane Ian swept through Fort Myers. His house still didn’t have running water, so he and his family have been doing laundry at a friend’s, and in the background of our call, I could hear his youngest asking to go pick up her blanket.

Hurricane Ian made landfall last week near Fort Myers as a Category 4 hurricane. CNN’s latest reported death toll has risen above 100, with over half of those deaths in Lee County, where FGCU is located. CNN also reported that some Florida residents may not have power for months due to the structural damage. Rollins estimated that about half the county was still without power.

As for FGCU’s campus and pool facilities, Rollins said they faired pretty well in comparison to the devastation in the rest of the county. The basketball courts are staging the Coast Guard and other first responders. Still, enough damage was done that swimmers have not yet been able to move back into their own rooms. One of the dorms reopened recently, a positive sign, as Rollins said that “the biggest thing is getting people back in their own spaces.”

The pool facilities were also largely untouched, unlike the soccer fields where the storm ripped out the bleachers. A couple of days after the hurricane swept through, the team went in to clean up. The scoreboard still works, but signs and other debris blew into the pool area. Since then, they’ve been having practice.

FGCU’s season opener against Campbell was scheduled for October 14-15, but was cancelled due to a lack of hotel availability. Currently, the hotels are overrun with displaced people and first responders. Instead, the team was set to have their intrasquad meet, which was canceled due to the hurricane.

“Everyone’s been dealing [with the aftermath] in their own way,” said Rollins. Right now, he’s focused on making sure that the team has access to the resources they need, from food to counseling. “We need to make sure we’re taking care of ourselves so we can take care of others,” he said. And with school canceled until October 10, one of the main activities has been helping out in the community.

After morning practice, many of the swimmers meet up with other FGCU athletes to spend the rest of the day clearing debris and removing damaged furniture from homes. Lots of help is needed around the county, especially with heavy lifting. Every morning, the FGCU Eagles Council posts meet-up locations on their Instagram story and the athletes go where they’re needed.

As the days continue, more supplies are coming in, which makes things better. UPS and the mail are starting to come back. Rollins stressed that one of their biggest needs right now is “time to help others.” When school resumes it will cut down on that time, but athletes are planning to stay involved in the rebuilding efforts.

School resuming may also impinge on their season. Rollins expects the tentative restart date to hold, but plans for how students will make up the lost time are still in progress. Since the school wants to avoid eating into breaks, they may end up holding Saturday classes.

Laughing, he quipped it would be the first time any of his swimmers have had a class conflict with Saturday morning practice. But if that happens, they’ll make it work. As they’ve shown over the last week, they’re a resilient team.

Great to see the team pitching in and great perspective from Coach Rollins. I’ll be rooting for the Eagles this year!