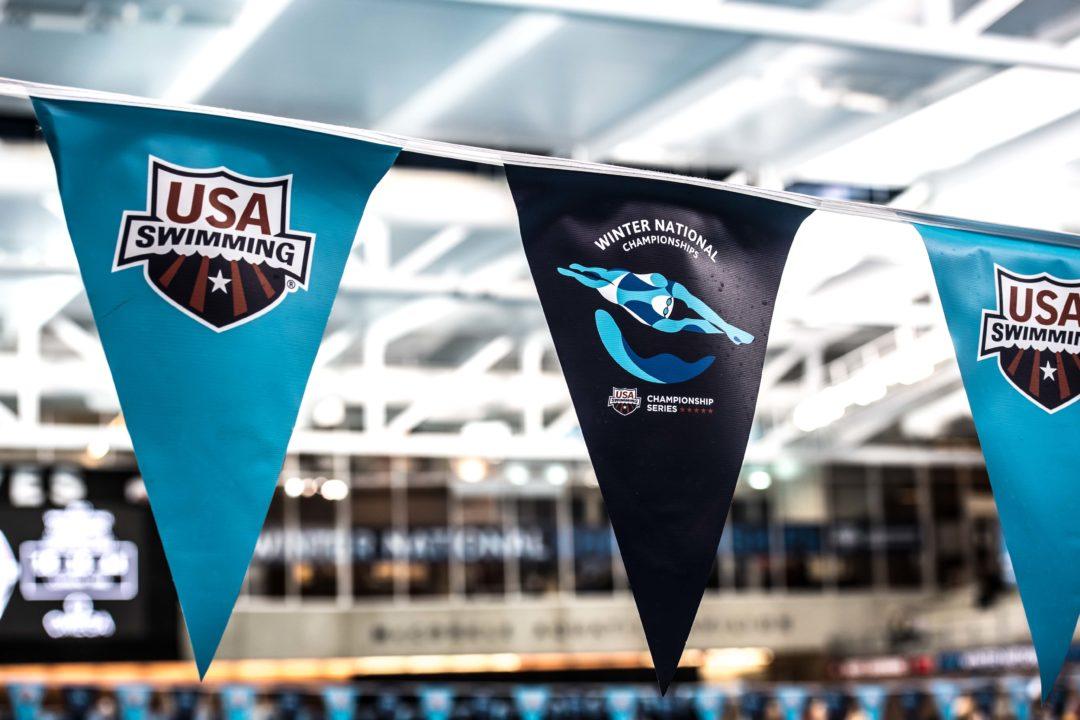 USA Swimming announced it will debut a new tier of membership called the Flex Swim Membership, which will officially become available on September 1, 2018. Stock photo via Mike Lewis/Ola Vista Photography

On Tuesday, USA Swimming announced that it will debut a new tier of membership called the Flex Swim Membership, which will officially become available on September 1, 2018.

Flex Membership will be available for a $20 annual membership fee, though additional fees charged by the team a swimmer joins may apply.

USA Swimming CEO Tim Hinchey said in a press release that “The Flex Swim membership allows us to introduce the sport to a new generation of athletes, using a product that is more conscious of the current environment and competitive in the youth sports market.”

Hinchey further states that the goal of the Flex Membership is “to adapt to busy family lifestyles and introduce the sport of swimming with a lower barrier to entry and flexibility to still enjoy the many other available activities. Historical data tells us that if we can get a kid to try team swimming, they will stick with it and enjoy it.”

In addition to allowing children access to the sport of swimming, the Flex Membership will also give participants access to a digital welcome kitUSA Swimming’s digital member account and mobile app Deck Pass, educational materials including LEARN and Safe Sport, as well as insurance coverage. As far as competition is concerned, Flex members are permitted two sanctioned events per year below the LSC Championship level.

Flex Membership will not afford participants eligibility for individual recognition programs such as Scholastic All-America or the IM Extreme Challenge, nor will Flex permit swimmers to participate in national development camps. The subscription to Splash Magazine that members of USA Swimming are also accustomed to receiving will not be offered to Flex members either.

USA Swimming was prompted to introduce a program like Flex Membership after realizing a 7.5% average decline of new members from 2014-2016. Of that decline, USA Swimming witnessed a 9.2% decrease in the number of 10-and-under swimmers participating in year-round swimming.

Citing the 2014 State of the Swimming Industry Report, USA Swimming notes that 78% of parents who are not currently involved in swimming do not consider enrolling their kids with a swim team after they have taken swim lessons. However, 58% of those same parents said they would consider their kids for a swimming program that meets one or two times per week.

Furthermore, when they asked for kids’ opinions, USA Swimming learned that 48% of kids who left USA Swimming did so to participate in other sports. 43% of those children also stated that they quit USA Swimming because it represented too much of a time commitment. According to Tuesday’s press release, a poll of the 2016 U.S. Olympic Swim Team showed that 83% of the swimmers stated that they were multi-sport athletes growing up.

Though USA Swimming points out that 93% of kids who swim until the age of 13 will remain in the sport, the applications for Flex Membership go far beyond simply lowering attrition rates. As not every single swimmer that tries the Flex Membership will remain a competitive swimmer through the completion of high school or beyond, USA Swimming suggests teams use Flex to broaden their scopes of service to potentially include learn-to-swim programs, summer league teams, fitness programs for other multi-sport athletes, triathlon-prep programs, pre-season camps for high school swimmers, stroke camps and clinics, and home school programs.

Should the Flex Membership option increase matriculation rates for swim clubs, USA Swimming should then also receive a financial stimulus, particularly during Olympic years. Looking at financial reports published by USA Swimming for 2013 and 2017–years following a Summer Olympics–USA Swimming saw marked increases in income revenue. Though more swimmers were in the water, not all of them stayed, per the 2014 report which noted that 43% of children who left swimming because it represented too large a time commitment. Furthermore, USA Swimming reveals, unsurprisingly, that sponsorship revenue may decline in post-Olympic years–though this was not the case from 2012-2013, which saw a nearly $60,000 uptick in sponsor revenue–as the Olympics represent an extremely lucrative 2-week television slot for advertisers eager to partner with NGBs such as USA Swimming. Similarly, USOC Grants tend downward, as do Events & Registrations (extremely):

According to the same reports, expenses for USA Swimming, meanwhile, do not waver nearly as much, with the exception of the amount of money spent on the National Team during Olympic years, and the amount of money spent on promotions in 2016. Athlete Protection & Safety, an area USA Swimming and other NGBs have been heavily criticized for not adequately funding, has witnessed a steady growth:

With more athletes in the water and with more athletes (hopefully) remaining in the sport for longer, USA Swimming might anticipate investing significantly more money in areas such as club development, member services, and athlete protection and safety. As the Flex Membership option grows and evolves, is likely to gain certain statistical insights that are as-yet unknown, such as where Flex shows the most potential for increasing club retention rates; which competitions parents and athletes participating in Flex most care to participate in; and even, potentially, what type of swim gear Flex members purchase and how much they are willing to invest in technical racing suits.

here are two ideas that come to mind with the flex membership.

1. Clubs without Learn to swim program don’t have to retain a different more expensive insurance for those swimmers.

This program can help those teams who have struggled to be more well rounded. Getting Water Polo players and Synchronize swimmers to train with the club program without putting emphasis on Swim Meets.

As a former USA swimmer and parent to two year round USA swimmers (one of whom is a multi sport athlete) I really don’t see this driving memebership. Where we live there are so many teams to choose from but the issues are the same everywhere…lack of adequate lane space. This drives up cost and forces coaches to choose the committed swimmers over those looking to swim one or two days a week. The limited lane space also means practice times that are a challenge for families with both parents working or single parent families. USA Swimming would be much better served funding more lane space and creating opportunities for programs to expand the number of kids they can enroll… Read more »

Can families keep renewing that flex membership every year or is it just for their first year in the sport?

I think there is a movement away from organised sport for kids . The figures above bear this out & this is before the recent bad publicity .This $20 thing is just a means to inflate the numbers to stem the coming exodus.

AWESOME! Extremely thankful this is now an option! Will be great to get more kids involved in our sport.

Hmm…is the dollar dropoff ($54 to $20 per year) really going to help convince kids/families to now join a USA Swimming club, especially given the reasons cited in the article? All I see is current families (who are already USA Swimming members) accepting the lower payment, with nothing much changing for them than a magazine that immediately ends up in the trash not taking up their mailbox anymore.