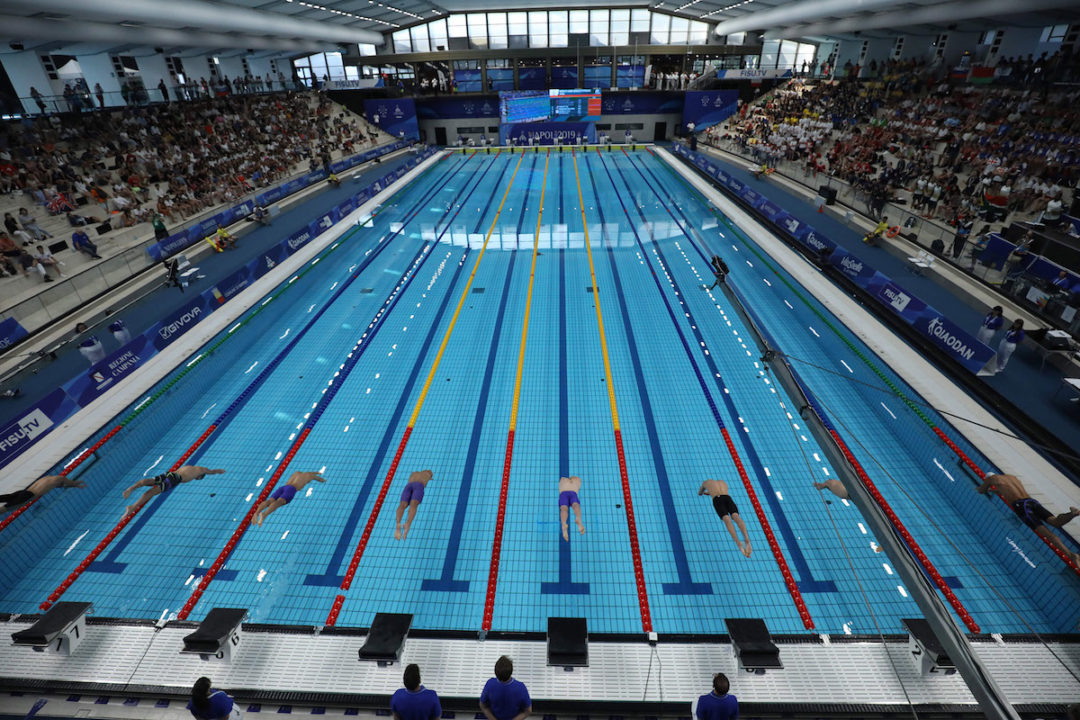 The Americans won a total of seven medals on night four of the World University Games, further cementing themselves as the most dominant team of the meet. Archive photo via Tina Tiwari

On the fourth night of the 2019 World University Games in Napoli, the USA put considerable distance between the rest of its competitors in the medal standings. After last night, the Americans tallied 12 medals while Japan sat with 8 – now, the US is sitting pretty with 19 total medals to the current runner-up in Japan’s 12.

Additionally, three of the American’s seven new medals were gold. The first event win came from 18-year-old Katharine Berkoff, who re-broke her own meet record to win the 100 back in a final time of 59.29. That’s the 10th fastest time in American history, and also ranks her within the top 10 in the world this year.

Justin Ress from NC State also found gold on night four of the competition, dramatically earning it in a tie with South Africa’s Zane Waddell in the 50 back. After the two of them broke the record in both the prelims and semifinals, the two crashed to the wall in a final time of 24.48, missing Waddell’s now-official meet record of 24.46.

The final American gold came from the women’s 800 free relay final. The team of Kaersten Meitz, Paige Madden, Claire Rasmus and Gabby DeLoof annihilated the competition, taking the win by over five seconds with their final time of 7:53.90, missing the meet record by 0.02.

Italy has 4x the medals the Aussies have….

Aussies had their World Trials about same time, so bit of a schedule conflict

Japan is impressive-sending a very small group to Naples. In those freestyle relays- breastroker, backstrokes and butterflyer and a distance freestyler had to contribute.

Nance – there’s unfortunately no good listing that we’ve been able to find. You can use Wikipedia and go year by year, but there’s no summary that I know of.

Search Google for “Swimming at the XXXX Summer Universiade.” The meets are held in odd years.