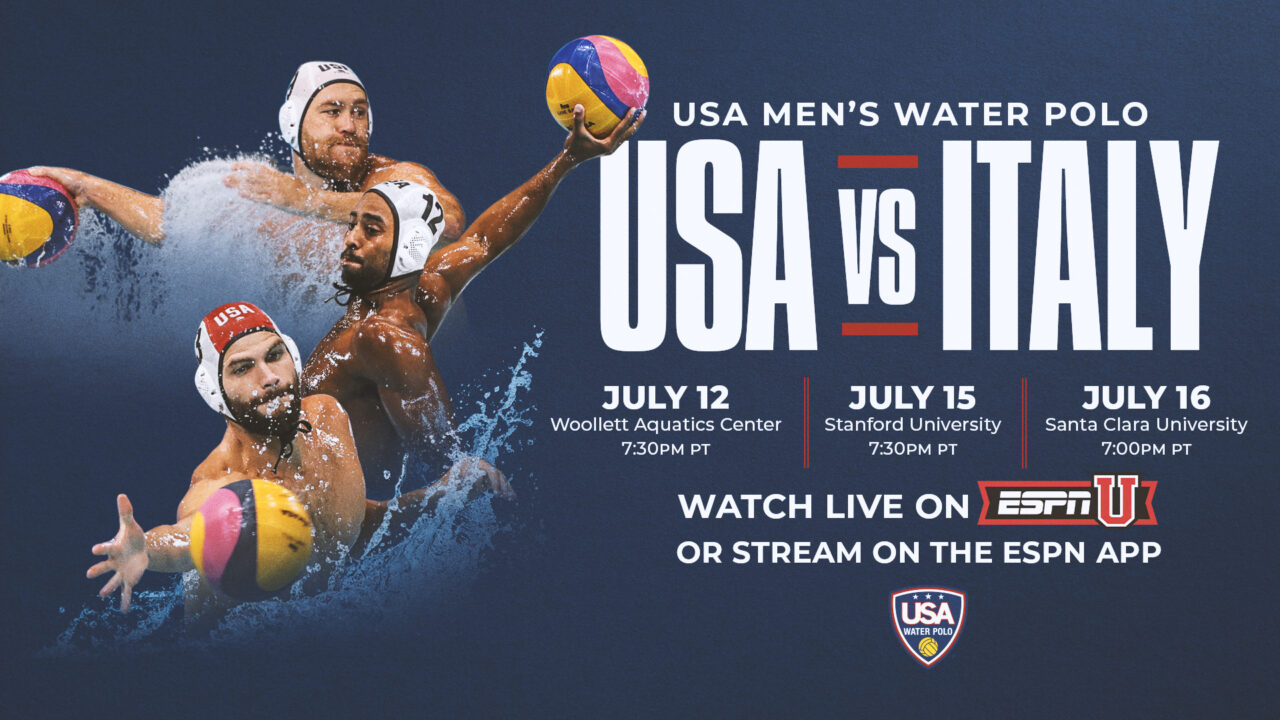 All the action will be broadcast live on ESPNU and will stream on the ESPN app beginning on July 12. Current photo via USA Water Polo

Irvine, CA – June 16, 2022 – The boys are officially back in town, and they’re going live on the Worldwide Leader in Sports! For the first time since 2019, the USA Water Polo Men’s National Team will play in home waters as they welcome the Italian National Team to California for a three-game series in July. All the action will be broadcast live on ESPNU and will stream on the ESPN app. The series begins July 12 at 10:30 p.m. ET/7:30 p.m. PT at the William Woollett Aquatics Center in Irvine, California. Tickets are on sale now for this match and can be purchased by clicking here.

The two teams then head north for back-to-back matches in the shadow of the world’s largest water polo tournament: the USA Water Polo Junior Olympics. On July 15, Stanford University’s Avery Aquatic Center will play host at 10:30 p.m. ET/7:30 p.m. PT. The next day (July 16), as club competition heats up throughout Silicon Valley, Team USA and Italy close out their series at Santa Clara University at 10 p.m. ET/7 p.m. PT. Tickets for the two matches in Northern California will go on sale in early July.

Team USA will welcome Italy just days removed from competition at the FINA World Championship in Hungary. The games also serve as a tune-up for the FINA World League Super Final, set for July 23–29 in Strasbourg, France. The USA Men took home sixth place at the Tokyo Olympics in 2021, their best finish since a silver medal mark in 2008. Italy earned seventh place in Japan suffering a one-goal defeat at the hands of the United States in the fifth–eighth place semifinals.

“We are so excited to finally get the chance to play in front of our home fans again,” said Dejan Udovicic, Men’s National Team Head Coach. “Thank you to ESPN for providing an amazing opportunity for our athletes and water polo fans, not only in the United States but around the world as well. We hope everyone can support Team USA this July by attending these games or watching on TV. Go USA!”

A trio of legendary voices will serve as analysts during the series. USA Water Polo Women’s National Team Head Coach and 1995 NCAA Champion Adam Krikorian will join the call on July 12. 1984 Olympic silver medalist and USA Water Polo Hall of Famer Chris Dorst will serve as analyst on July 15. Five-time Olympian and Olympic silver medalist Tony Azevedo finishes the series on the mic on July 16. Greg Mescall will handle play-by-play on all three matches.

Live stats of all three matches will be available via 6-8 Sports at 68Scores.com. Follow @USAWP on Twitter, Instagram and Facebook for additional updates throughout the series. For more information on the USA Water Polo Men’s National Team, including roster and schedule click here.