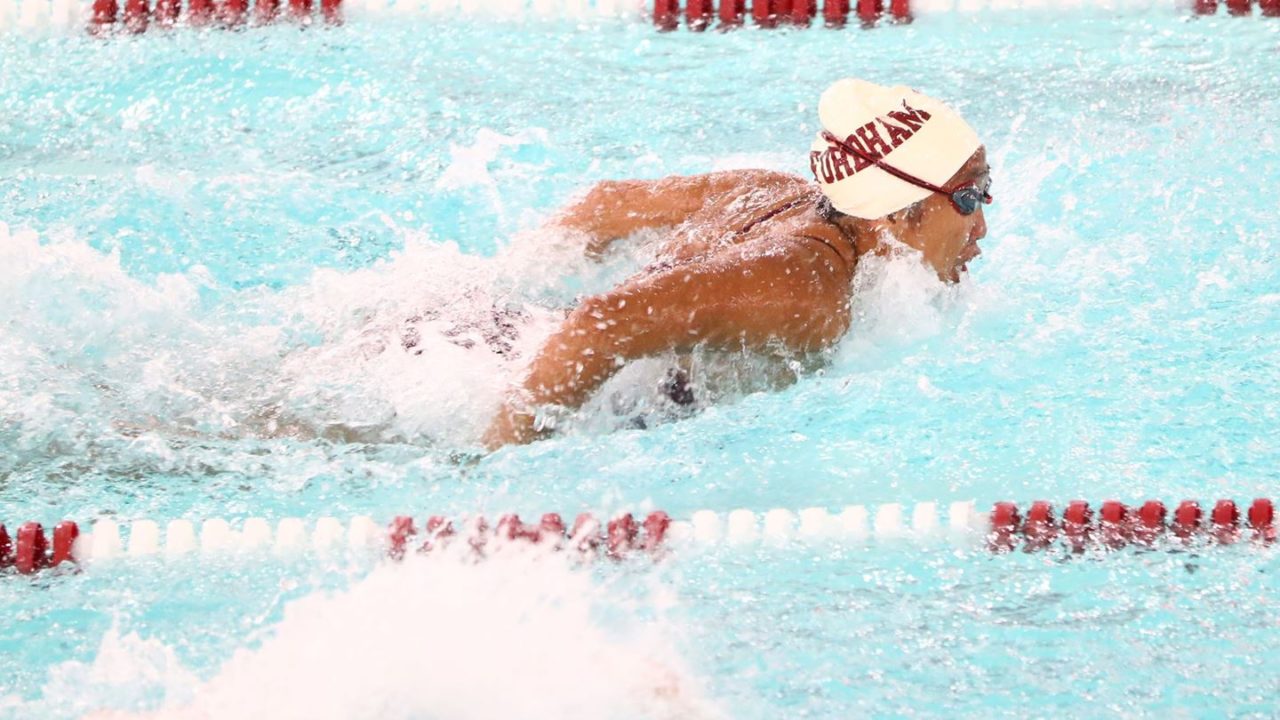 The Fordham women defeated UMass, 173-126, while the Minutemen topped the Rams 207-86 in Amherst. Current photo via Fordham Athletics

AMHERST, Mass. – The University of Massachusetts men’s swimming and diving team picked up a 207-86 win over Fordham on Senior Day Saturday behind 14 wins at the Joseph R. Rogers, Jr. Pool. The Minutemen swept the top-three spots in the 100 Free to finish the day with 10 runner-up showings and nine third-place finishes.

Four different UMass seniors claimed individual event wins on the afternoon, starting with Harry Ortof’s winning time of 9:38.11 in the 1000 Free as Emerson Kiefer finished in second. Madden followed up by leading a one-two finish in the 100 Breast, clocking in a time of 56.02 to touch first with Owen Churchwell behind in second. Ryan Pedrick’s time of 20.75 in the 50 Free led the way for the Minutemen while Panagiotis Androulidakis took the 500 Free win with a swim of 4:36.51 with Tyler Pidde in second.

Dias Konysbayev picked up a pair of wins, first leading the UMass sweep of the 100 Free with a mark of 47.73 while Rothenberger and Colin Baker rounded out the top-three finishers. Konysbayev closed out the individual events with his second win, clocking in a time of 1;55.19 in the 200 IM.

A pair of freshmen in Noah Witt and Ethan Davey recorded wins on the afternoon, beginning with Witt’s winning swim of 1:52.61 in the 200 Back before Davey led a one-two finish with Munstermann in the 100 Fly with a swim of 51.34.

Casey Ransford took the top-spot with a time of 1:55.71 in the 200 Fly with Luther Gordon finishing in third. Gordon added another top-three finish in the 200 Breast, finishing third just behind Ben Gryski in second as Gryski posted a time of 2:09.57.

Robert Katz won both the 1-Meter and 3-Meter Dives on the afternoon, first scoring 269.57 to win the 1-Meter followed by Tommy Cotner before scoring 298.88 to lead another one-two finish with Cotner on the 3-Meter board.

The Minutemen will resume action on Feb. 19 when they head to the SPIRE Institute in Geneva, Ohio for the Atlantic 10 Championships on Feb. 19-22.

AMHERST, Mass. – The University of Massachusetts women’s swimming and diving team picked up five wins and added 18 top-three finishes to go along with a 200 Fly sweep as they fell to Fordham at the Joseph R. Rogers, Jr. Pool on Senior Day, 173-126.

Summer Pierce paced the Minutewomen to the 200 Fly sweep, clocking in a mark of 2:09.55 while Stephanie Judge finished behind in second with a time of 2:10.89 while Jane Denenberg rounded out the top-three.

Maja Boric continued her winning ways on the boards for the Minutewomen, winning her 18th and 19th dives of the year as she opened the day with a score of 322.87 on the 3-Meter board. Boric rounded out her home career with a win in the 1-Meter, scoring 274.57 to lead the way with Beth Luther finished in second after taking third in the 3-Meter.

Kelly Malyszka added three top-three finishes for the Minutewomen, including a win in the 1000 Free with a swim of 10:26.08 before nearly winning the 500 Free with a time of 5:04.98 to finish second while Bella Snyder took third in both events. Malyszka closed out her day with a swim of 2:11.03 to take third in the 200 IM.

Emily Rudiman took the 100 Free for UMass, reaching the wall first with a time of 52.92 while helping the Minutewomen to a second-place finish in the 200 Free Relay to close out the day.

Olga Egkorova picked up a second and third-place finish, first taking second in the 200 Free with a time of 1:56.04 before going on to finish third in the 200 Back. Stephanie Judge added a runner-up finish of her own, posting a time of 58.73 in the 100 Fly.

Chelsea Meiring took second-place in the 200 Breast in her final home meet, posting a time of 1:06.58 to lead the Minutewomen with Mia Flagiello in third. Flagiello went on to post the second-fastest time of the day in the 200 Breast while Olivia Mozoki rounded out the top-three.

The Minutewomen will return to the pool for competition on Wednesday, Feb. 19 when they head to Geneva, Ohio for the Atlantic 10 Swimming and Diving Championships at the SPIRE Institute from Feb. 19-22.

Amherst, Mass. – (February 1, 2020) – The Fordham swimming & diving teams had their final dual meet of the season on Saturday, as the Rams headed to Amherst, Massachusetts for a date with UMass.  The Rams ended the day with a split in the meet, as the women defeated UMass, 173-126, while the men fell by a 207-86 count.

Both Stegen and Wilson were then a part of the 200 freestyle relay with Kevin Berry and Bryce Bollesen that took second in 1:25.65.  Bollesen also had a second place finish in the 50 freestyle in 21.37 seconds.

The Rams will next be in action on February 7-8, as select Rams will compete in the NYU Winter Invitational.