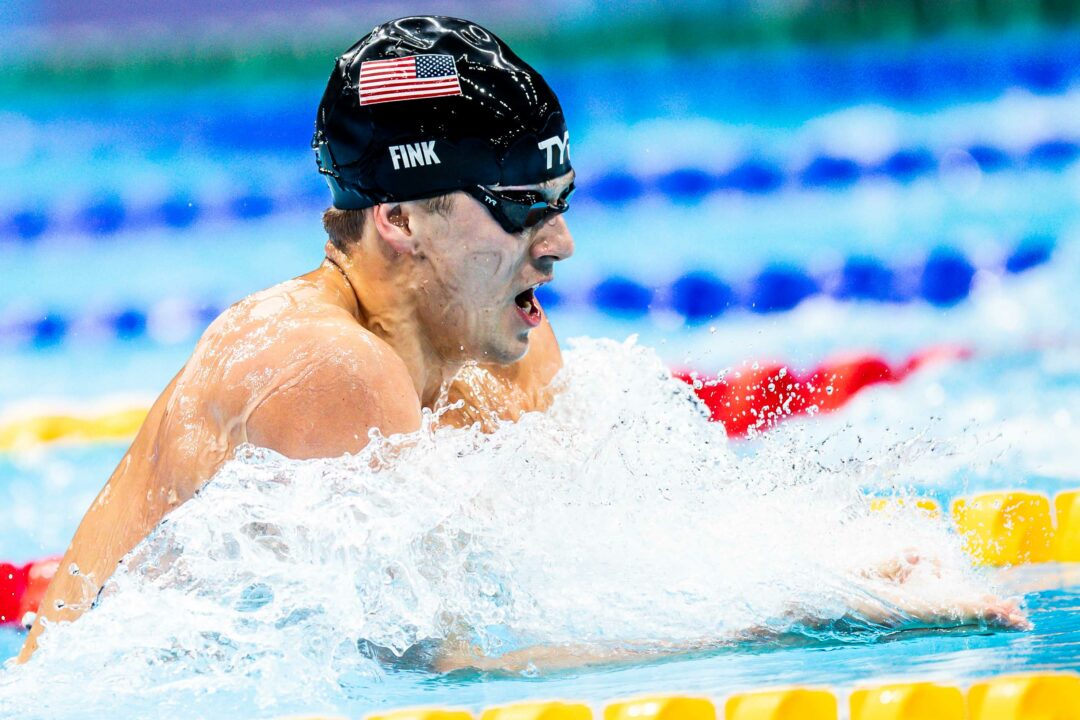 Fink swept the men's breaststroke events in the ISL Final and then won six medals at the 2021 Short Course World Championships in Abu Dhabi. Archive photo via Jack Spitser/Spitser Photography

Walsh swept her individual events at NCAAs and also showed off immense versatility in the relays as the Cavs rolled to a second straight national title.

Douglass had an incredible month, going six-for-six individually in dual meets while also setting lifetime bests in the 50 back and 100 back.

There were two major international competitions that took place in December, and Nic Fink was among the top performers in both of them.

Fink, who has recently made the move from the University of Georgia in Athens to Georgia Tech in Atlanta, began the month over in Eindhoven, competing at the ISL Final for the Cali Condors.

Fink’s victories over Shymanovich were a huge factor in the battle for the league championship, with Shymanovich expected to provide some major jackpot points to Energy Standard after having broken and then re-broken the world record in the 100 breast during the two previous matches.

Fink ended up being the second-highest scorer in the match, putting up 59.5 points to trail only Energy Standard’s Sarah Sjostrom (61.0), and nearly propelled the Condors to victory.

Energy Standard ultimately won the league title by 12 points, with the Cali women’s medley relay having been controversially disqualified, but nonetheless, Fink stepped up and performed when the lights were on.

A few weeks later, after taking finals at school, Fink headed over to Abu Dhabi for the 2021 Short Course World Championships, and walked away with six medals.

Fink first won gold in the men’s 200 breaststroke, edging out Dutchman Arno Kamminga in a time of 2:02.28 to narrowly miss his American Record set one month prior. It was also the first Short Course World Championship title for the United States in a men’s breaststroke event since 2004.

Fink followed up by winning a second individual world title in the 50 breast, lowering his American Record in both the semis (25.68) and final (25.53) en route to the gold medal.

He added a third gold in the men’s 4×50 medley relay, recording a blazing 25.13 50 breast split as the U.S. tied with Russia in a new Championship and American Record of 1:30.51, and Fink also won a third individual medal, a bronze, in the 100 breast.

The Morristown, New Jersey native added silver medals in the men’s 4×100 medley relay and the mixed 4×50 medley relay, finishing with six medals to tie teammate Ryan Held and Russians Kliment Kolesnikov, Andrei Minakov and Aleksandr Shchegolev for the most among male swimmers at the competition.

Another swimmer that had a strong December was Carson Foster, who won the men’s 400 IM and contributed on the winning 800 free relay at the Minnesota Invite before heading to Abu Dhabi and winning three medals, including a gold on the 800 free relay.

We also saw several standout performers at the Winter Junior Championships in both Austin and Greensboro, including the likes of Thomas Heilman and Katie Grimes.

Wow, that finkolas is respectable….a bold opponent. So impressive and strong swimming

I see you in every thread with Nic Fink making negative comments. What do you. have against him? He’s clearly someone who can step up when it counts

Olympics is where it counted.

I can’t help but think that the breast stroke will come out of the shadows of other strokes [back? fly?] a bit more by the time we get to Paris 2024. With Fink, the possibilities rang from Wilson to Licon to Michael Andrew – and onward.