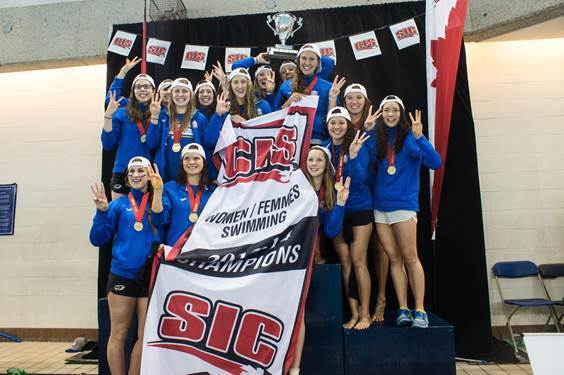 The UBC Thunderbirds swept the Rocky Mountain Cup, defeating rival Toronto after losing both of their CIS titles to them last February. Archive photo via UBC

The University of British Columbia had their first real tough test of the season last weekend, facing off against CIS rivals Toronto and Calgary at the Rocky Mountain Cup. There were also swimmers competing at the meet representing the University of Calgary Swim Club, the host Cascade, CHENA, Edmonton Keyano, the Foothills Stingrays and the University of Lethbridge.

Both the UBC men and women, who lost their CIS titles at the hands of Toronto this past February, had a vastly successful meet coming out with decisive wins.

The two powerhouses split the relays, with Toronto claiming the 200 free relay on night 1 in 1:44.10, and UBC taking the medley on night 2 in 1:53.60. Toronto had to sit out of the medley relay, the last event of the meet, as they had exhausted all of their event swims.

On the men’s side, leading the way for the Birds was 2016 Olympian Yuri Kisil and multi-time CIS champion Keegan Zanatta. Kisil did what he does best, taking both sprint freestyle victories in times of 22.28 and 49.15. Zanatta was victorious in the next two freestyle distances up, taking the 200 and 400 in 1:49.17 and 3:50.29 respectively.

The battle between the Thunderbirds and the Varsity Blues was much tighter on the men’s side, as UBC led Toronto by just 20 points after the first night. A lack of depth ultimately cost Toronto, who fell by 210 points, 760-550. Calgary was 3rd with 230 points, and their Swim Club affiliate notched 110.

After many UBC swimmers took redshirt years last year to train for the Olympics, Toronto was able to take advantage and win both national titles. Now, many of them are back and the Thunderbirds will be tough to beat come February.