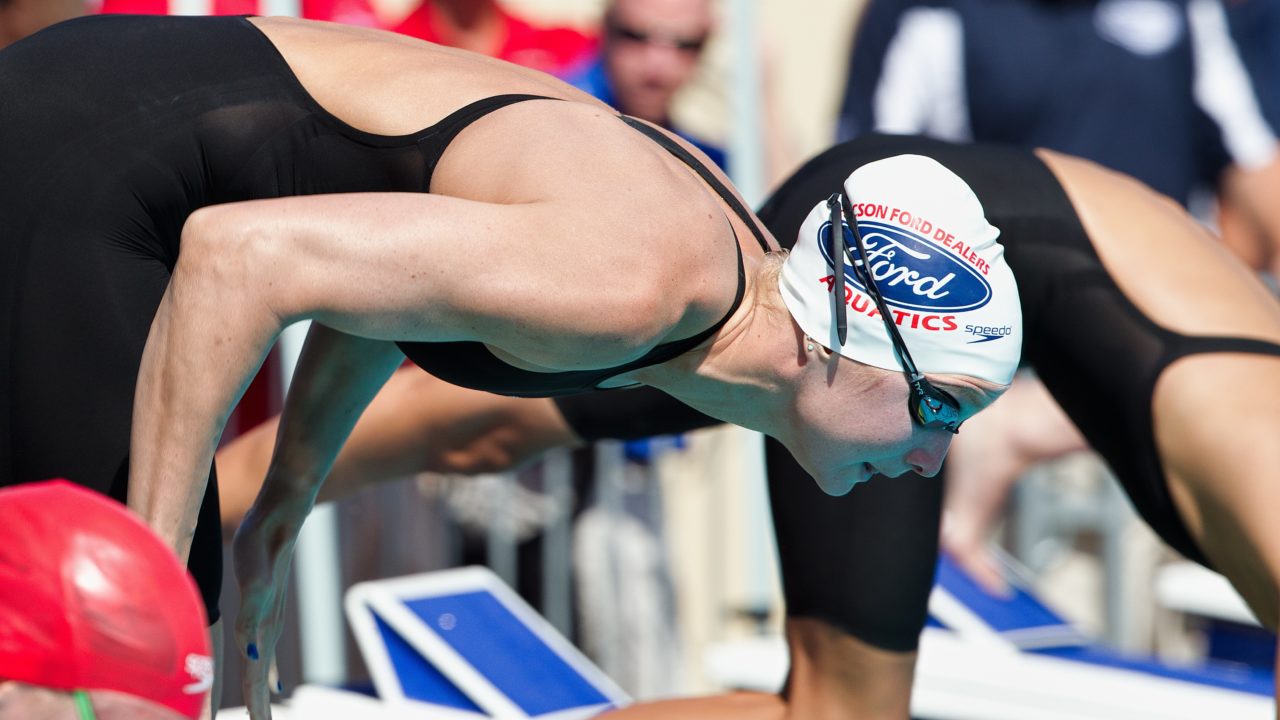 Former NCAA Champ Annie Chandler is one of the athletes who will sport the Ford emblem at Trials. (Photo Courtesy: ©Tim Binning/TheSwimPictures.com)

To read more about advertising and the Olympic movement, check out: How much of a Difference does Logo Placement Make | USA Swimming Fighting to Clarify Cap Rules Ahead of Trials

There was never a rule book written that did not have a loop-hole. In the case of sports, when those loop holes directly affect competition, they frustrate people.

However, sometimes these loopholes can benefit all competitors (who choose to us them), without disadvantaging their competition.

This is the case with the loophole found by Tucson Ford Dealer Aquatics in Tucson, Arizona. This team, that trains on the University of Arizona campus, is sending more Olympic Trials qualifiers than any other team in the country.

Part of their growth and success has been thanks to a huge sponsorship by the local Ford dealers in Tucson (which fortunately stood even through the economic downturn).

And the reward for Tucson Ford’s loyalty and support will be a huge discount on Olympic Trials advertising. That’s because the Tucson Ford swim team will be able to display the name and logo of their chief sponsor on the cap at the Trials in Omaha.

That is because it is the official name of the club on a year-round basis. USA Swimming CMO Matt Farrell explained that “USA Swimming had to submit a list of all official clubs by Sept. 1, 2011 to the USOC, which we did. If a club had the name of a company (ex. Tucson Ford) at that time, it was approved as being ok. We then had until April 1, 2012 to submit any additions of clubs added to USA Swimming.”

So, in other words, it’s too late for this year, but this is an opportunity for teams (or individuals who start their own teams, like Charlie Houchin’s IX3 program) to sell advertising space.

Tucson Ford is not the first team with a title sponsor – Farrell related the story where once upon a time, the Cincinnati Marlins were known officially as the “Cincinnati Pepsi Marlins,” and could thus put the Pepsi logo on their caps (the choice of a new generation!). The swimmers aren’t necessarily receiving direct funding from the sponsorship; however, enterprising post-grad groups in future years could get together and collectively negotiate such agreements and sneak their sponsors onto deck.

Unless the USOC and IOC relent on their strict anti-advertising rules, this trend is going to be the wave of the future. Of course, that doesn’t stop the Olympic governing bodies from closing the loophole, but I think we’ll see a whole lot more teams with big-dollar, name sponsorship by the Rio Olympics. That will also severely ramp-up the intensity for teams that allow their pros to represent clubs they swam with as age-groupers out of respect for those teams’ efforts, and bring a whole new level of importance to the club-hopping that has become so frequent at the elite levels of swimming.

In a time of economic depression, rising costs of college swimming, and programs being cut, this is a logical movement that hopefully gains traction nationwide. The rules are outdated. “pros” have been competing in the Olympics for years now. Individual athletes should be able to represent any sponsor who offers them the best deal.

In any domestic competition besides Trials swimmers CAN represent sponsors on their caps, suits, and warmups. USA Swimming passed legislation allowing this a couple of years ago, but no one has really taken advantage of it.

I’m not sure what the updates were, but the USA Swimming rule book still limits logos on caps and suits to 2 advertisements that cannot be bigger than 3.1 inches squared each, including the manufacturer’s logo. That’s not very big.

Athletes in other sports, like Little League Baseball, have worn local sponsor names on their jerseys for years, and survived. They also wear the jerseys of their favorite European soccer teams, with company names. It’s time for USA Swimming to abolish the rules on advertising. If a family doesn’t like the advertising on the cap or suit, they can make it part of their decision making on choosing a team.