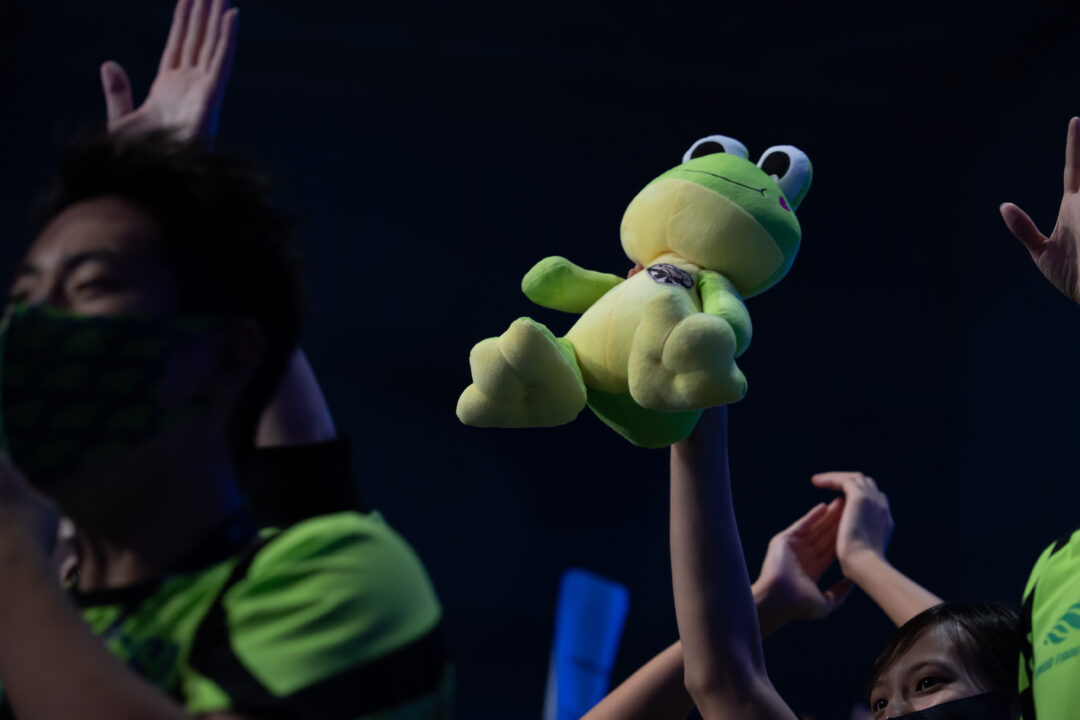 In total, 5 picks from the 2021 ISL draft were forfeited because ineligible swimmers were chosen by the NY Breakers, Tokyo Frog Kings, and Toronto Titans. Stock photo via Mike Lewis/Ola Vista Photography

After the conclusion of the ISL draft, three more ineligible draftees have emerged, leaving more gaps in teams’ rosters heading into the 2021 season.

The Tokyo Frog Kings and New York Breakers have each taken another hit to their roster.

For Tokyo, Noe Ponti, their last choice, is not participating in the 2021 ISL season. That’s because he has opted instead to retain his amateur status and head to NC State this fall to race in the NCAA.

For New York, another draftee, Maxime Grousset, who was chosen is not eligible.

The Toronto Titans have also apparently drafted a swimmer who is not entered in the league – versatile British woman Aimee Willmott.

The Hits Keep Coming for Tokyo

After what was a contentious day for Tokyo in the draft, they’ve now unintentionally forfeited their last two draft picks, after also forfeiting a pick when they drafted Sarah Vasey, who had already been retained by the New York Breakers.

With his next pick, after arguing with ISL technical director Apostolos Tsagarakis, Salo attempted to pick Anastasia Gorbenko, who had also already been chosen. He then landed on Noe Ponti from Switzerland.

This immediately raised flags, as Ponti is committed to swim at NC State in the fall. NC State head coach Braden Holloway confirmed to SwimSwam on Wednesday that the European Junior Champion Ponti is not doing ISL and is still coming to NC State.

As it turns out, Ponti was one of the collegiate swimmers who registered while exploring his options, but ultimately he pulled out of the draft pool to maintain his college eligibility.

Tokyo finished 5th out of 10 teams last season as the first team out of the final, and with these draft-day blunders, combined with questionable day 1 decisions, it’s hard to see them returning to that spot in 2021.

With a lot of very fast swimmers still on the board, including the next pick Marius Kusch who was a Breaker in 2019, that one hurts much more than a forfeited late-round pick.

The Breakers, who climbed into the semi-final in 2020 after finishing last in the league in 2019, will now enter free agency with 25 swimmers, needing to get to 32.

Versatile IMer Aimee Willmott was chosen in the 8th round on Saturday by the Toronto Titans. But Willmott was not in the pool. This was not noticed during the telecast, but was pointed out to SwimSwam after the draft.

This one is more ambiguous, because while Willmott was not on the originally-released list of swimmers in the ISL draft pool, which was put out after the registration deadline.

She has, however, been added to the Titans’ online roster.

In a few instances, this happened with junior swimmers as the league was trying to protect their identities, but that doesn’t apply to Willmott, who is 28-years old.

The league has confirmed that Willmott is not participating this year, which means that Toronto will also head into free agency with one fewer swimmer on their roster: 26 instead of 27.

Also Lukas Maertens from Germany did not sign in for the draft and got picked by Iron!

It would be nice to see a simple explanation of how these huge gaffes are even possible: poor technical preparation; coaching/managing glitches; fickle swimmers who change their minds after the fact – what gives?

Was Margalis in the draft. didnt see her name

Glad to see Ponti is still coming in next year. NC State also picked up Bartosz Pisczorowicz for next year as a xfer from Louisville. A lot of new faces next year and a lot of impact talent.

Guess State is doing something right as the hate is building based on the down votes! Hope the swimmers and school have seen the importance of getting vaccinated to winning titles!

How does tokyo pick bowe becker when he’s already been picked for cali? This is a mess

Why isn’t Maxime Grousset eligible ? He’s not in the draft pool ?