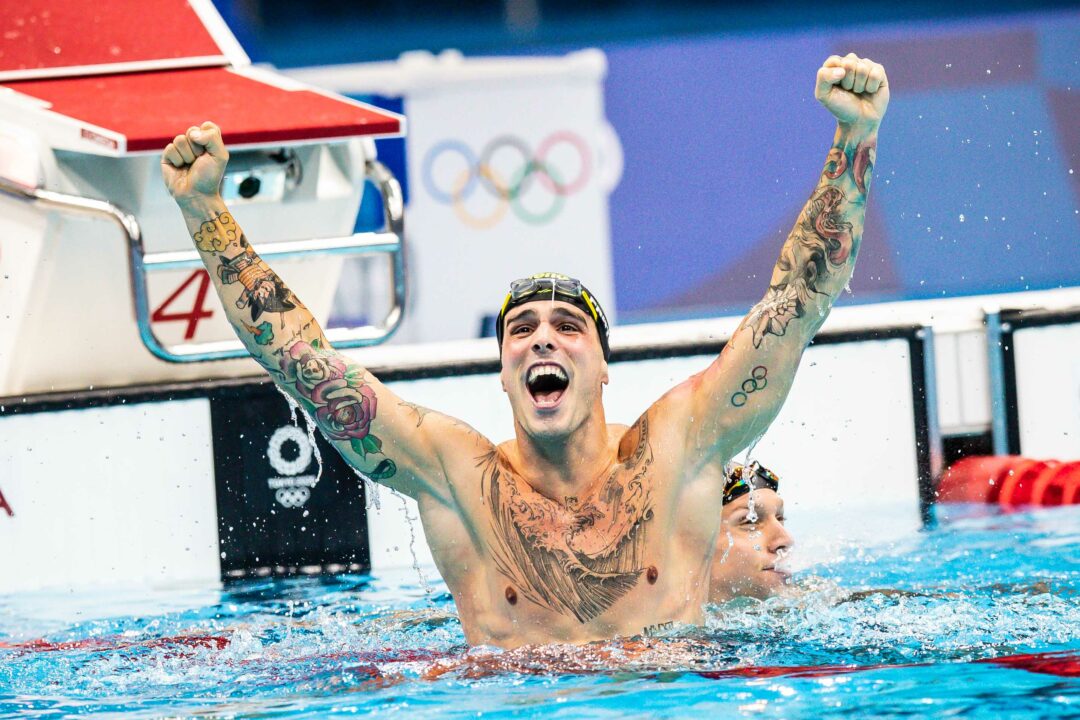 Bruno Fratus' wait is over, as one of the great men's sprinters of this era earned his first Olympic medal during the final session of the Tokyo Olympics. Current photo via Jack Spitser/Spitser Photography

Brazil’s Bruno Fratus‘ wait is over, as one of the great men’s sprinters of this era earned his first Olympic medal during the final session of the Tokyo Olympics. The 32-year-old finished 3rd in the final of the men’s 50 free, swimming a 21.57 to earn a Bronze medal for Brazil. Though Fratus has a decorated career at the World Championships, Pan Pacific, and Pan American Games, he had never, until tonight, won an Olympic medal.

Additionally, Fratus has now become the oldest pool swimmer in history to win their first Olympic medal. That title was previously held by American David Plummer, who won his first medal with a 3rd-place finish in the 100 back at the 2016 Rio Olympics at the age of 30. Plummer was 30 year, 304 days old when he earned his first medal, while Fratus was 32 years, 32 days old. That mean’s Fratus was approximately 1 year and 3 months older than Plummer was. Importantly, Fratus is only the oldest pool swimmer to earn a first Olympic medal. There have been open water swimmers who are older when they earn their first medal.

This wasn’t the first piece of history Fratus made in the past several days. With his semifinals performance of 21.60, Fratus became the first swimmer ever to record 90 sub-22 LCM 50 free performances in their career. He added to that total with his finals swim of 21.57, so he now has 91 career sub-22s. Fratus has hinted that these were his last Games, but it will be interesting if he chooses swims for another year or two, and is able to reach 100 sub-22 50 frees.

Bruno was at Auburn all four years I was there. This dude is an animal, lives and breathes his training, and is an all around good guy. Really excited that his hard work has paid off. A truly deserving individual.

His reaction and Sarah’s in the 50 free were great bookends to cap off the Olympics individual events.

Seeing how Happy Bruno, Flo, and Caeleb were for eachother was super heartwarming

Sportsmanship at its finest.

11
0
Reply
NOT the frontman of Metallica

I would love to know Fratus training methods and compare it to Andrews. Since the idea of usrpt seems to be you can go fast anytime all the time and here we have a guy you seemingly could drag out of bed and still get a sub 22 swim.

Biggest difference —- by a lot —- is dryland. Fratus does a lot of Olympic lifts and other strength/fast-twitch dryland work (as does Dressel, Manaudou and every sprinter not named MA). According to his father, Andrew abandoned weights after they couldn’t hit his pace times in the pool. And, just a reminder, Brent Hayden dragged his 37-year-old body out of a 7-year retirement and cracked 22. You’re either born with it, or you aren’t.

They probably trained a week and gave up

They seemed to try for a few months

I don’t think swimmers do “a lot” of Olympic lifts. They’re doing the easier modified version of some of them, ie: a hang power clean, because Olympic weightlifting is taxing on the joints and takes a long time to learn and perfect.

Your point is well taken though – these guys prioritize their out of the pool training pretty much equally to their in-water.

It’s not that different as far as I know. Arison Silva seems to like specificity but is probably not as dogmatic about it as the usrpt philosophy is.

1
0
Reply
NOT the frontman of Metallica

Mr Consistency finally got his medal, wel deserved and long overdue. I’m happy for him

That was a long time coming, happy for the guy.

“Plummer was 30 year, 304 days old when he earned his first medal, while Fratus was 32 years, 32 days old. That mean’s Fratus was approximately 1 year and 3 months older than Plummer was. “

did you really put that last sentence in there?

What’s wrong with it?