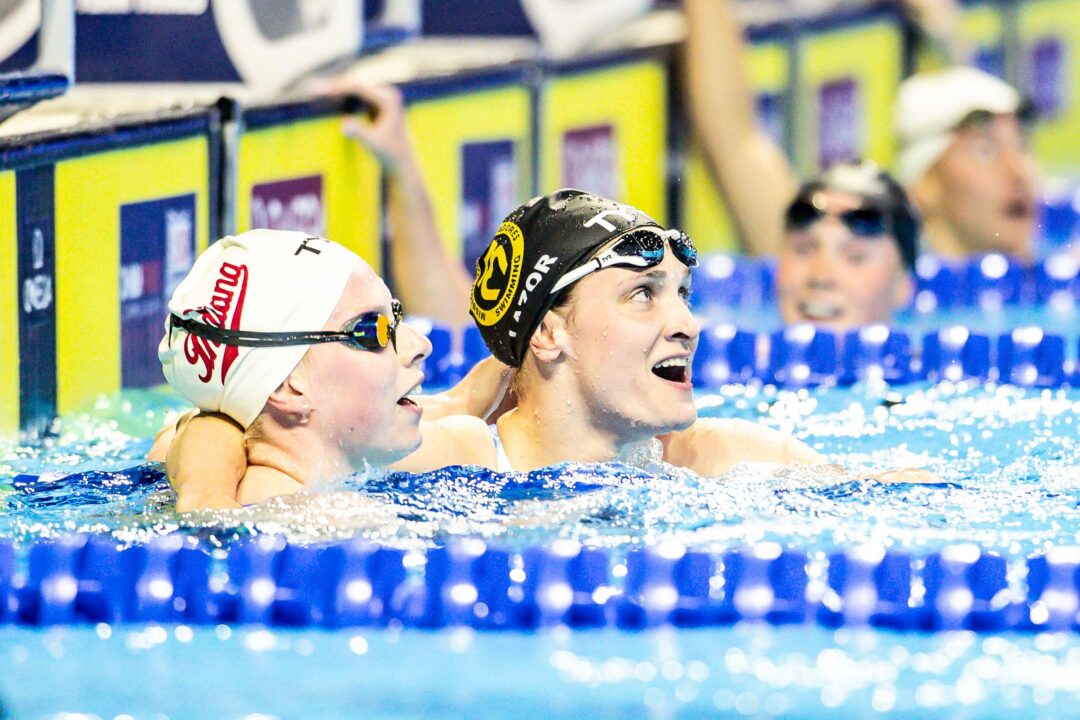 Lilly King and Annie Lazor are in the hunt for a 1-2 finish in the women's 200 breaststroke in Tokyo. Archive photo via Jack Spitser/Spitser Photography

The women’s 200 breaststroke field in Tokyo has been injected with some new blood after the recent domination by Russian Yuliya Efimova, as the 2016 Olympic silver medalist failed to qualify for the Games in her pet event despite winning three of the last four World Championship titles.

Reigning Olympic champion Rie Kaneto is also absent, wiping the slate clean for a new champion to prevail in Tokyo.

South Africa’s Tatjana Schoenmaker has picked up where Efimova left off in terms of becoming the woman to beat in the event this summer, following up a silver behind the Russian at the 2019 Worlds with a standout 2:20.17 swim earlier this year, ranking her first with a bullet in 2021.

Schoenmaker, 24, has the opportunity to make some national history in her first Olympic appearance, with the last South African female Olympic swimming medal coming back in 2000, and the last gold in 1996 (when Penny Heyns swept the women’s 100 and 200 breast).

With a best time six-tenths clear of her next-closest competitor, Schoenmaker is certainly in good shape to get the job done. But there are several others who will give her a run, including a couple of Americans, a couple of Brits, and Efimova’s teenage heir apparent.

The United States won three straight golds in this event from 2004 to 2012, but didn’t even have anyone make the final in 2016. That should change this year.

Lilly King is best known for her dominance in the 100 breast, but has made it clear she wants the 200 to be hers in Tokyo.

After placing 12th in Rio, King was fourth at the 2017 World Championships in the 200, second at the Pan Pacs in 2018, and then was disqualified in the 2019 World Championship preliminaries. She felt she would’ve won that race had the DQ not happened, and there’s no denying she’s been among the best in the world recently—having been 2:21 in 2017, 2019 and 2021—she just hasn’t put it all together on the big stage.

King thrives under pressure. At the last Olympics it was King versus Efimova in an epic 100 breast final, and the 200 was merely a bonus on her schedule. This time, the 100m result seems like a forgone conclusion, and King’s real test will come here.

Annie Lazor, King’s close friend and training partner in Indiana, is a natural 200 breaststroker (compared to King’s 100m prowess), and has been picked by many to win gold in Tokyo.

Lazor, 26, has never even been to a Long Course World Championship, but that says nothing about her ability. She’s been on fire over the last three years, winning gold at the Short Course World Championships at the end of 2018 before rifling off another first-place finish at the Pan Am Games in 2019. Lazor’s winning time there, 2:21.40, would’ve earned silver comfortably at Worlds.

After an emotional victory over King at the U.S. Olympic Trials, where she revealed that her father had recently passed away, Lazor said she’s saving her “ideal” performance for Tokyo. If she’s able to deliver it, she’ll be tough to beat.

Great Britain hasn’t won an Olympic medal in the women’s 200 breast since 1960, and the nation now has two swimmers in contention to do so in the form of Molly Renshaw and Abbie Wood.

Renshaw has been consistently among the world’s best in this event dating back to Rio, where she finished sixth in a time of 2:22.72. Renshaw followed up with another sixth-place finish at the 2017 Worlds in 2:22.9, but failed to crack 2:23 for the next three years (despite still making her way onto the podium at the 2018 Commonwealth Games, 2018 Euros, and making the final at the 2019 World Championships).

But the 25-year-old took her game to a new level in 2021, unleashing a time of 2:20.89 at the British Olympic Trials in April, ranking her third in the world heading into Tokyo. That broke the British Record of 2:22.08, set by Jocelyn Ulyett in 2017 and matched by Renshaw earlier in the year.

Also dipping under the old National Record at the Trials was Wood, also a premier medley swimmer, who clocked 2:21.69 to, like Renshaw, take more than a second off her previous best of 2:22.77.

The question for the two of them now becomes whether or not they’re able to recreate their Trials swims in Tokyo. Renshaw has always performed well internationally, so we expect her to be in the thick of the battle come the final. Wood is a bit more of an unknown quantity, but with her focus maybe more geared towards the 200 IM, she may be able to swim without much pressure here, which can often yield positive results.

Chikunova took the world by storm in 2019, registering a startling time of 2:21.07 at the European Junior Championships at the young age of 14. Just like Lazor’s time at the Pan Ams, that would’ve been good for silver if she was at the World Championships (or even gold, as eventual world champion Efimova was only given a spot on the Worlds team after Chikunova withdrew to swim at the juniors, having placed first at the Russian Trials).

Efimova has gotten Russia on the medal stand in each of the past two Games, winning bronze in 2012 and silver in 2016, and Chikunova is in position to keep that streak going. If she takes a step forward and dips under 2:21, a gold medal is within her grasp.

I don’t think Lilly will make the podium with the way she swims a 200.
Lazor will be the American to watch.
Schoenmaker – Lazor – Renshaw

I’ll be happy with anyone but King winning.

I went with Lazor in the pick’ems but Schoenmaker is right there as well. Should be very close.

I think Chikunova is the big question mark here.

I would not be surprised to see her 2:21-mid, or under the world record.

Pilato and Chikunova make each of the breaststroke events tough to predict, because we can only really speculate about where they are at.

It’s too bad. Yuliya wasn’t in top form at trials and would be in the hunt here if she could swim it. To their credit, the federation honored the results, and we can enjoy the showdown in the one hundred.

I don’t see King getting in the medals here. Would be disappointing if Renshaw doesn’t quite make it.