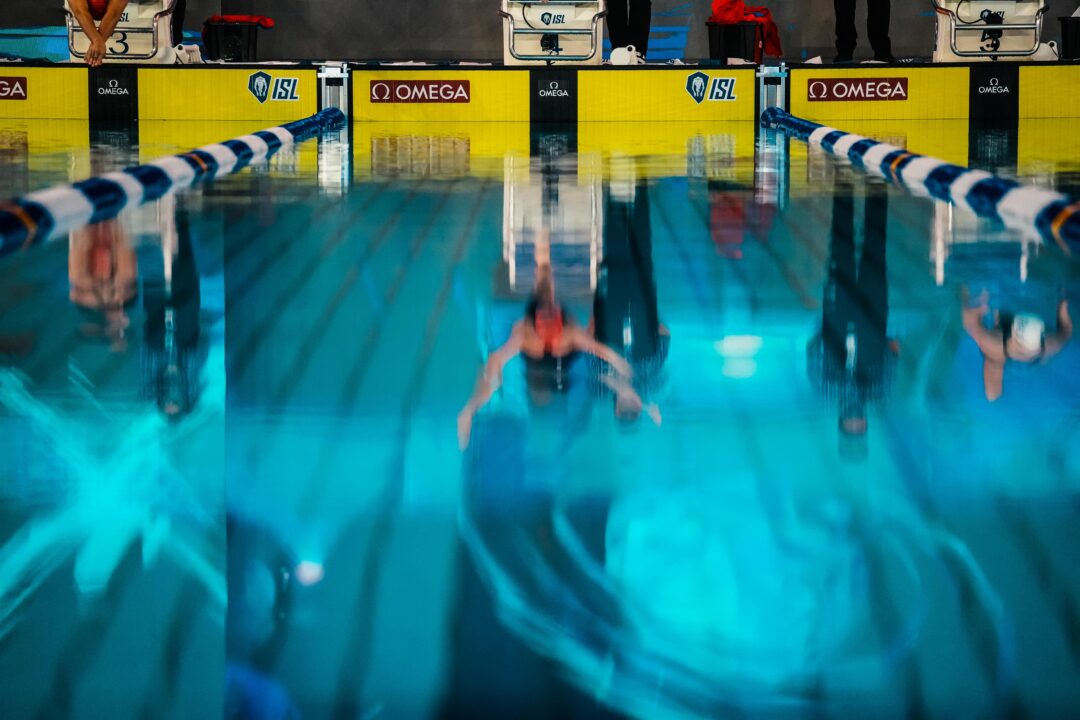 The world's two most successful swimming nations, Australia and the United States, are scheduled for a head-to-head matchup in August. Stock photo via Mike Lewis/Ola Vista Photography

Tickets are now on sale for the revival of the Duel in the Pool competition, which will pit a team from Australia against a team from the United States in a head-to-head battle for cross-continental swimming supremacy.

With details about the competitors still sparse (Katie Ledecky has already pulled her name), Swimming Australia is promoting ticket sales for the event that will run from August 19-21 in Sydney.

Swimming Australia’s new CEO Eugenie Buckley is hyping the meet up as a competition between the world’s two best swimming nations. Even some top Australian swimmers, who have a much travel commitment for the meet, have said they’re uncertain about their participation. No American swimmers have publicly stated their intent to participate, and USA Swimming has not said how they will choose their roster.

“You only have to look at the recent World Championships to see the rivalry between our two nations is as strong as it’s ever been, between both individuals and especially our relay teams,” Buckley said.

“This will be unlike any other swim meet, not only through unique and exciting race formats but also the way in which we bring people closer to the action than ever before through innovative fan engagement and presentation activations.”

“It’s incredible value to witness some of the most elite athletes in the world and we urge Australian sporting fans to grab their seat so we can turn Sydney into a green and gold fortress for our Dolphins.”

The Sydney Olympic Park Aquatic Centre currently holds 10,000 spectators as one of the largest permanent aquatics facilities in the country. A sellout would mean serious revenue for the event, though it’s hard to gauge what interest will be without knowing who will be participating.

One hopes they actually have some legitimate surety with regards to the quality of the respective teams or this has the potential to be a major fiasco ….. and completely “nix” the entire concept of any further such meets.

Next year …. there could be some openings; either Q1 or post Worlds (esp if ISL cannot be resuscitated) but once AUS put their hands up for SC Worlds; surely someone in Swim AUS should’ve thought “overkill”/this isn’t going to work out.

I’m probably still going to go to both Duel and SC Champs .. I hope we see some stars from Budapest competing.. hard to find good,premium tickets now though

much of the appeal has gone with no Ledecky v titmus

SC champs for me….I am surprised the Sydney pool holds 10000 now, thought it was much smaller than that. They should really bid for them WCs then

No American swimmers have publicly stated their intent to participate

Absolutely seems like it’s going to be sparse. Just too weird a comp schedule for it to “fit” this year.

I think the national teamers even know how USA swimmers are going to be invited?!? Which is sad IMO

They really should be giving a bit of an indication of who’ll be headlining now that tickets are on sale.

My guess is that they’re somewhere between “we know it’s not going to be great” and “it’s nay impossible to get anyone to commit more than 2 weeks out” on it.

Which begs the question ….. why, in the name of (select the deity of your choice) are they so insistent on this event going forward when the cards continue to be stacked against it being anything other than a waste of money, breath and time should it proceed ?

Swim AUS, for whatever reasons, assented to hosting SC Worlds at the end of the year …. after this so-called Duel was announced. Logic would clearly suggest that something had to give way given the bulk of their own prime assets would NOT be fronting up for 4 “profile” meets over such a timeframe.

I’m not against these meets, but persisting with this meet going ahead inside a crazy international… Read more »

“Somebody thought of it, and someone believed it. Look what it’s done so far.” – Kermit The Frog

Or ….. people (with the tunnel vision you described) being so insulated in their own little “silos” that they aren’t actually communicating clearly with other parts of their organisation or not actually listening.

The reality is that neither DITP or SC Worlds are likely to have any major public visibility beyond those involved or who follow the sport. Even for said devotees, how many are actually going to fork out the $$$ for both ? Commonsense would say that one may be viable ….. two is doing little more than trashing your brandname and quite likely scaring away future “stake-holders” (underwriting from state government entities) for future prospective events.

I’ve already booked my tickets to Sydney. Will be buying my tickets to the event tonight. Even if the majority of swimmers aren’t there it will be cool to see just a few big stars.

Short course worlds in December will be better.

I’ll probably go to that too. Short course just will never be “real” swimming to me though. You can literally spend the majority of the race underwater.

Long course is better of course but the field will be better in December and it will be a great opportunitry for Australians to properly peak for a short course worlds and potentially sets some world records.

Agreed. No sooner do the swimmers start getting into their stroke than they have to tumble around and do the underwater thing again.

I don’t know why people would downvote me saying I’m going to this and excited? Haha

I gave you a +1. Make sure you cheer loud for me while you’re there. I wish I could go, but I’m not able to.