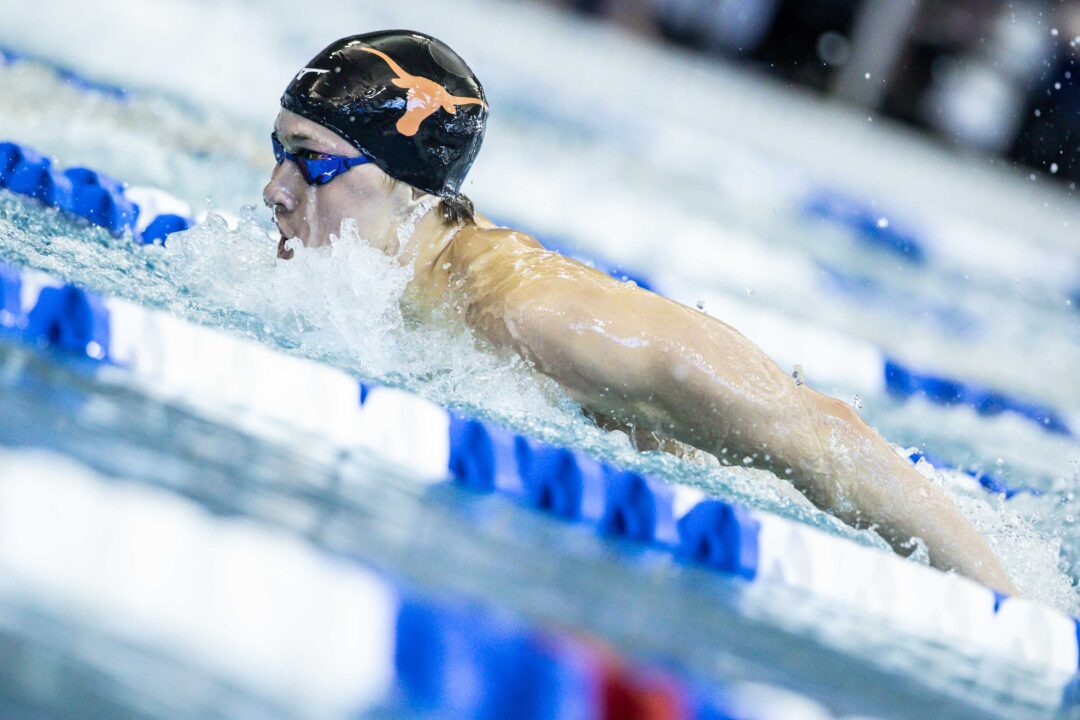 Sectionals may notbe  the primary meets of the summer for many of the best swimmers in the country, but that doesn’t mean they lack speed. That’s especially true when some U.S. National Team swimmers show up at these meets and take the opportunity to compete in some events they didn’t get a chance to swim at Trials.

Case in point #1 – Carson Foster. The 20-year-old is only a few weeks removed from winning three medals at the World Championships, and he mentioned on our podcast recently that he would be going after some fast times in his “off events” here this week.

But for a versatile swimmer like Foster, “off event” is a very relative term. Foster blasted a 1:53.67 in the men’s 200 fly tonight in Austin, making him the third-fastest performer ever among Americans, and also giving him a time that would’ve been within a whisker of the 1:53.61 it took Japan’s Tomoru Honda to earn bronze in this event at the World Championships.

Foster’s time tonight was faster than the season or lifetime best of either of the men who represented the USA in this event in Budapest, Trenton Julian and Luca Urlando. Julian finished 16th in the semis at Worlds, while Urlando finished fifth in the final with a time of 1:54.92.

That’s nearly a five-second improvement on the day for Forster, whose best time before this morning was a 1:58.47 from the 2017 Junior Nationals. Foster clocked a new best with a 1:56.44 in prelims this morning before knocking another chunk off of his best time tonight.

Case in point #2 – and in fact the original headliner for this article before Foster’s swim – Shaine Casas. He captured bronze in the 200 back in Budapest just a few weeks ago, and swam the 100 free tonight after not swimming that event at Trials. Not only did he easily win tonight with a new lifetime best of 48.23, but that time would’ve put him fourth at the US International Trials back in April, two one-hundredths ahead of Hunter Armstrong and Drew Kibler.

While Casas may have had clearer water tonight than he would at a bigger meet, it wasn’t as if he was wholly lacking in competition. Longhorn sprint star Daniel Krueger took second in 49.16, followed by Brett Pinfold (49.67) and Matt Brownstead (49.87).

Casas’ previous lifetime best of 48.91 came last June at the Texas A&M Senior Circuit meet, just days after he barely missed the Olympic Team in several events. That was also not too long before he announced that he was forgoing the rest of his eligibility at Texas A&M and heading across the state to join the University of Texas post-grad group as a pro.

The 200 breast wasn’t lacking in star power, either, as three of the top four finishers at U.S. Trials were competing in Austin tonight. The win went to veteran Will Licon, who touched first in 2:09.76 after finishing fourth in Greensboro in 2:11.03.

The next two spots went to men who competed in this event at Worlds, with rising Texas senior Caspar Corbeau, who competes for the Netherlands, taking second with a 2:10.38 and US post-grad Charlie Swanson touching third with a 2:12.47. Jake Foster was the only other man under 2:18, taking fourth with a time of 2:13.19.

The final event of the night went to Luke Hobson, who recently completed his freshman year at Texas and joined Foster and two other Longhorns in the 200 free final at Trials. Tonight, Hobson knocked over seven seconds off of his lifetime best in the 800 free this evening and won by nearly 10 seconds with a time of 8:09.65.

Unsurprisingly, the women’s side was dominated by the Texas Longhorns’ current team. Kelly Pash was the only woman under 55 in the 100 free, clocking a new lifetime best in 54.71. Pash didn’t swim at Trials, but that time would’ve finished ninth in prelims, putting her just a tick away from making the A-final. Pash’s teammate Kyla Leibel was the only other woman under 56, clocking a 55.50.

Pash nearly doubled, but ended up taking second to a potential future teammate in Dakota Luther, 2:09.25 to 2:09.35. Luther, who swam for Georgia the last four seasons, recently entered the transfer portal and explained that she was looking into graduate options at the University of Texas.

Channing Hanley, who just completed her freshman campaign with the Longhorns, won the 200 breast in a tight race with Rice’s Ella Flowers. Hanley held the lead early on, and held off a pair of 40-low splits from Flowers on the back half to win, 2:34.75 to 2:34.90.

The 800 free also turned into an incredibly close race. Current Longhorn Erica Sullivan held off a late charge from 16-year-old Jillian Cox of Texas Longhorn Aquatics, and just got the touch at the wall, 8:34.38 to 8:34.42.

Not overly surprising. When you’re young and excellent at the 400 medley it is going to carry over to individual 200s also, if you give them any type of attention. We’d see the same type of thing from Grimes if she switched focus from the distance events. But I understand the reluctance to do so. Those women’s distance freestyles will always feature markedly inferior fields to any of the 200s.

What is your hate boner against women’s distance swimming? Have you seen the times being posted in the 4,8 and 15? Is the 2fly/2back field really that much better than the distance field?

Those women’s distance freestyles will always feature markedly inferior fields to any of the 200s.

Would they? They basically didn’t have enough entrants in the 2 fly in Tokyo to swim three rounds.

Inferior fields? To the women’s 200 fly? I have a bridge to sell you.

I don’t understand the idea that women’s distance fields are inferior/weak. You mention this consistently in your comments but don’t provide your reasoning.

Are your reasons time-based? Sure, outliers like Janet Evans swam times in the 80s and 90s that might still be relevant today, but you can also cherry-pick past times from other events that would be relevant. Even if it would be easier for, say, a 1988 Olympic champion to medal in a distance event than a sprint event, there are other factors at play. The last four decades have seen big innovations in the dolphin kick, starting technique, and weight training. We can argue about their relative impact, but I think it is easily observable that these… Read more »

watch out for his 200 back vs 15 year old Maximus Williamson later this week. both 1 second within each others best times.

I don’t think I could ever call this kid by his first name and keep a straight face.

For his sake, I hope he goes by “Max”

Will be interesting to see what Foster does come 2024 trials as the 200/400 IM and 200 free is a great schedule for having no doubles. However, this 200 fly definitely has to be enticing now. It just creates a double the night of the 200 free final with the 200 fly semis coming at the end of the same session. However, we’ve seen a number of swimmers do this double (e.g., Phelps, Tarwater, Clary, Bentz).

The IMs and the 2 free is the perfect schedule for him. Add in a 100 free at trials if he wants another relay. The 200 fly is locked down for the decade, and why risk the chance to be fresh enough to challenge the frenchie.

My man Foster slowly becoming the face of USA swimming one event at a time.
It’s amazing to see he is making his progress to the big pool

I told my swimmer sun and he started shouting “that pool is short!”