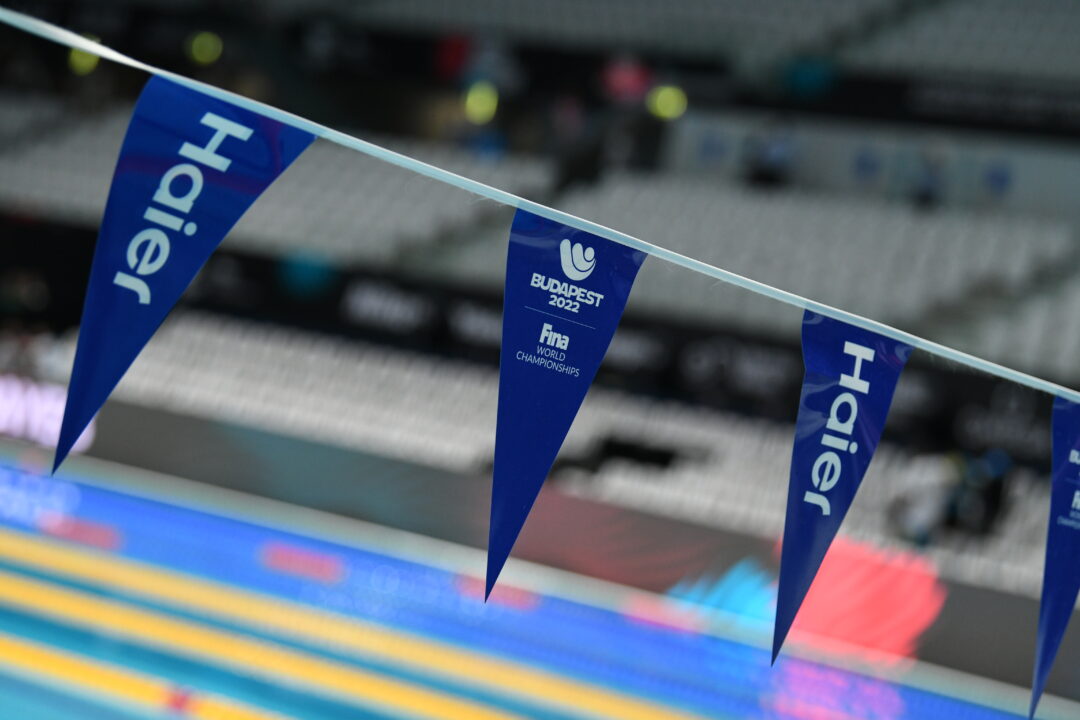 An individual involved at Worlds reached out to SwimSwam about potentially being drugged at the same party that Mary-Sophie Harvey said she was drugged at. Current photo via Fabio Cetti

An individual involved at the 2022 FINA World Championships believes they may have been drugged at a post-meet afterparty after the competition concluded in Budapest.

The individual told SwimSwam they aren’t 100 percent sure they were drugged because they were not tested, but had similar symptoms to those of Canadian swimmer Mary-Sophie Harvey, who revealed she had been drugged on Wednesday.

The individual has requested anonymity.

According to the source, they attended an event hosted at a bar called The Gigi’s in Budapest. The individual was under the impression that Hungarian swimmer Evelyn Verraszto was the host of the event, but she denies that. There was an official Instagram post made about the event, which named her brother David Verraszto as a host.

The event was swimming centric, but was open to the public via an admission fee.

SwimSwam has reached out to both Evelyn and David Verraszto about the event.

Update: The Verrasztos both responded and denied that David was the host, claiming that he was not present at the event and instead attending a competition in Zagreb, Croatia that weekend (which is true). Evelyn also said she had no involvement in the event. Neither of them have heard reports about any drugging incidents. David said that he was familiar with the bar that hosted the event. The Instagram post by the bar advertising the event was deleted after SwimSwam reached out.

There seemed to be some confusion over who did instigate the party: another swimmer who attended the party without incident told SwimSwam that they were invited by Hungarian swimmers, but were not sure who arranged it. Local promoters were billing the event as the “Swimming World Championships afterparty.”

The caption in the Instagram post advertising the event stated that it was a place to “meet and party together with multiple Olympic champions and Hungarian stars.” Admission was restricted for individuals over 18 years of age, and a fee was required for entry.

Multiple sources have told SwimSwam that this party was attended by both swimmers and non-swimmers.

While the sourced doesn’t know it for a fact that they were drugged, they said it it was likely the case given what Harvey had said, and because they didn’t think they drank that much prior to experiencing symptoms. Similar to Harvey, those symptoms included waking up after being unconscious, having multiple bruises, and needing to be carried by other people. The source said that all of their bruises were on one arm.

The source also said that at some point in the night, money that was on their person disappeared, but could not say what happened to it.

In an Instagram posts, Harvey spoke out about being completely unconscious for four to six hours after she was drugged, and posted pictures of numerous bruises that she received. Swimming Canada has told SwimSwam that they have been investigating the issue, and that a file on the situation has been filed to their independent SafeSport officer.

When asked about details regarding the alleged drugging incident, FINA told SwimSwam in a statement that they were in contact with Swimming Canada and the Local Organizing Committee.  FINA also brought up the fact that in 2021, they had adopted widespread measures aimed at protecting athletes, and that an Independent Investigation Officer will be assigned to investigate the matter further.

SwimSwam has since then asked FINA about what specific measures would be implemented in this particular drugging situation, and they responded by attaching their policy document on their rules on athlete protection from harassment and abuse.

FINA was not aware of what happened to Harvey until SwimSwam contacted them about it on Wednesday afternoon. They said that they have not heard any other reports about similar drugging incidents at this World Championships meet, or in 2017, when there was another FINA World Championships hosted in Budapest.

I’m not sure what FINA is supposed to do to prevent this when it happened at a venue out of their control? This could’ve happened in a club in almost any city worldwide.

those symptoms included waking up after being unconscious

To be fair, I tend to do this every day.

Im no expert, but “unconscious” does not equal “asleep”

You don’t “sleep” through surgery.

Hungary is the north west corner of Florida of Europe

You think drink spiking is only a thing that happens in dodgy countries? Absolutely not.

Maybe you’d prefer the Ohio of Europe? Of course it cam happen anywhere. But Hungary is a really backward place in Europe. Nb1 got it right.

8
-19
Reply
#AthleteLivesMatter
Reply to  Ugly IS my alibi

Hungary is actually one of the best countries in Europe. The proof is in the fact that they had to built a border wall in 2014. It is just a simple double fence with electric wire and motion sensors that triggers cameras. But they had to build this wall because millions of people were trying to illegally come to Hungary to live off of welfare. Border walls that are designed to keep people out of a country are proof that the country is so good that everyone is trying to move there.

The only other country in Europe that is remotely close to being as popular as Hungary…….is Poland.

“Hungary is actually one of the best countries in Europe.”
facts: one of the the most corrupt in Europe, with the worst/weakest currency, the worst record in human rights, highest deficit, lowest wage and wages growth, highest covid deaths, now a full blown dictatorship with the looniest, vilest government propaganda. It pays dirt to teachers and doctors and punishes them for any protest, schools and hospitals are literally crumbling buildings with no just patients and students. I could write a book about the terrible state of things in my country, you have 0 clue.

15
-9
Reply
Awsi Dooger
Reply to  Ugly IS my alibi

It can’t be that bad

I don’t get the reference ?

0
0
Reply
Armstrong 100 back gold in Fukuoka

Slightly off topic, but by ‘former’ Hungarian swimmer, does it mean Verraszto retired? I haven’t seen any reporting about that before.

Actually I saw some recent results that he was in…..actually right before or during WC

Interesting that Swim Canada said that they were aware of the incident and provided MSH with medical treatment and yet FINA only first heard about it when MSH posted it herself on social media…You’d think they’d have wanted to also include FINA in case of another athlete just like this no?

What you’re going to see is literally *everyone* running to CYA.

What you’re going to see none of is *anyone* trying to actually do anything about this.

How seriously will these allegations of drugging be investigated by Hungarian law enforcement?
Not trying to be snarky. Genuinely curious.

It’s not a very advanced country for human and women’s rights to put it lightly. Rapes happen because her skirt was too short and she was drinking. Homosexuals are deviants and sinners, all that deep red stuff. Police will prioritize accordingly (and that’s not to say Hungarians are at fault, it’s the government propaganda)

As someone who works in investigations, there’s not a whole lot you can do. Interview the victim and friends who helped her to see what they know. Look at CCTV footage (if there is any?) from the bar to potentially identify other witnesses or see if there is footage of someone putting something in her drink (unlikely). Other than that, it’s pretty hard to investigate something like this when the victim doesn’t know what happened or when it happened or who was involved, and all witnesses are likely to have been at least partially intoxicated.

seriously? There were 100s of witnesses, it happened in public in plain sight of friends and teammates, how about interviewing people who were there?

Ok. Tell me your investigation plan. I would love to hear your easy solution to this.

How do you identify who was there? Did the club keep a record of the names and contact details of every person who was at the club? Very unlikely.

But let’s give you the benefit of the doubt and say the club required people to scan their ID to get in and every single person in the club was able to be identified and contacted (almost impossible but I’m going to play along with you). What now? Call every single person who was at the club and ask them what? “Did you see someone who looked too intoxicated” isn’t going to get you very… Read more »

there will be videos,recordings, photos, instagram and facebook posts, you’d be amazed about the state of the technology in 2022. But you are too busy proving why it can’t be figure out.

110% agree this is not easy to investigate without a luck break on CCTV (which if any is likely shit quality in a dark club).

The only way this gets solved in my opinion if the suspect brags about it or their drug supplier is caught in a seperate case and talks to reduce their jail time.

not the best country for sure to rely on authorities