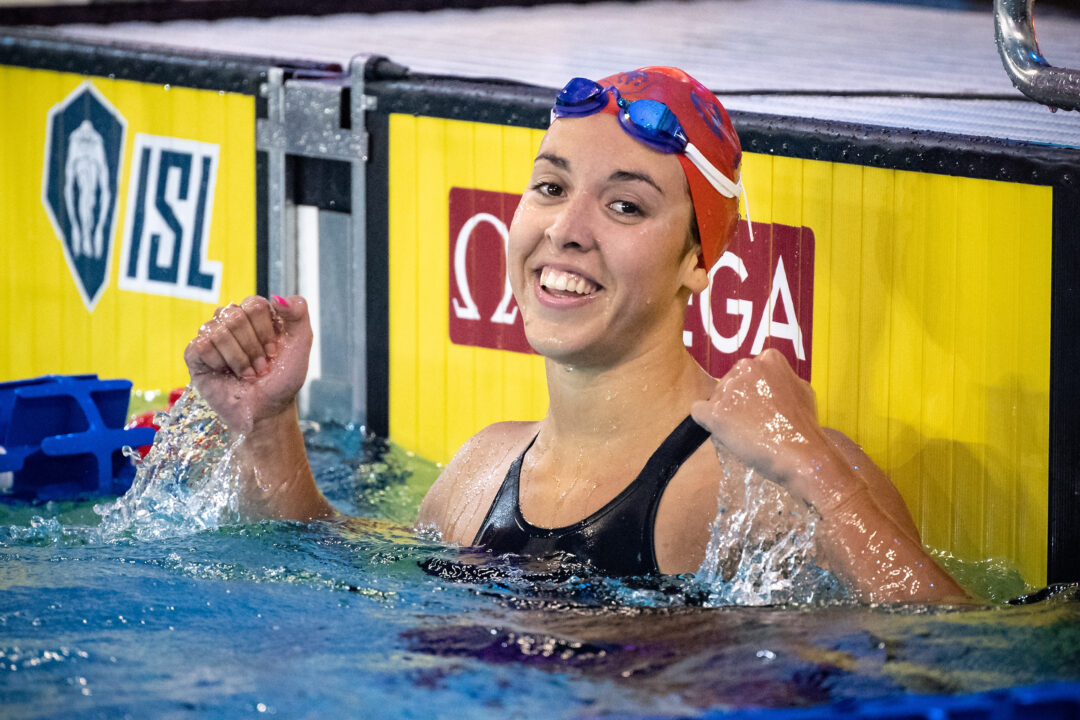 Harvey said she was completely unconscious at the time of the drugging, and posted photos of bruises that she said she received when the incident occurred. Current photo via Giorgio Scala

On Wednesday, Canadian swimmer Mary-Sophie Harvey shared via Instagram that she was drugged on the last night of the FINA World Championships, which took place in Budapest, Hungary from June 18 to 25, 2022. She also posted photos of bruises that she said she received while she was unconscious, although she said that she had other bruises that she didn’t feel comfortable sharing.

Harvey said that she was completely unconscious for four to six hours following the drugging, and that she did not know how she was drugged at the time that it happened. She stated that she was with her teammates when the incident occurred.

SwimSwam has reached to Harvey, Swimming Canada, and FINA for further details regarding what happened and any new protections that might be put in place for athletes.

Update: Swimming Canada has responded to SwimSwam’s inquiry with a statement addressing the issue. They claimed that they were still looking into the situation at hand, but to their knowledge, athletes left the team hotel following team Canada’s final meeting to celebrate on the final night of the World Championships.

“First of all, health and safety of our team members is first and foremost on teams. Our team management and medical staff are always looking out for team members, aware of their whereabouts and fully engaged with any issues.

We are aware there was an incident the night before departure from Budapest. As soon as team staff became aware, Mary received excellent medical treatment from our team physician on site, and was cleared to travel home.

Staff have been in contact with Mary since her return and we are offering her support. We continue to gather information on the situation, and the file has been forwarded to our independent Safe Sport officer.”

Sources tell SwimSwam that the incident happened at a party, where both swimmers and non-swimmers were in attendance.

Warning: this post includes details about drugging and violence.

On the last night of the World Championships, I got drugged.

At the time I wasn’t aware of what got inside of me, I just remember waking up the next morning completely lost; with our team manager and doctor at my bedside. I remember celebrating my competition while also being reasonable and aware of my next objective, which is Commonwealth Games. But then, I don’t remember anything. there’s this four-to-six-hour window where I can’t recall a single thing. I’ve heard bits and pieces by people and I’ve experienced judgement too.

The only thing I can say is this: I’ve never felt more ashamed.

The next day, I travelled back home and had dinner with my family. I remember my mom saying: “you seem different.” Little did she know, I felt that way too. It felt like the body I was in, wasn’t mine (it still feels this way). I got home and found a dozen bruises on my body. Some of my friends told me afterwards that they had to cary me while I was unconscious and it probably explained why.

It didn’t make me feel any better.

I called one of my good friends knowing her mom was a doctor, so they could guide me a little. I ended up going to the hospital, where I was met with doctors & psychologists. They tested & treated me the best way they could. They told me it happens more often [than] we think and that I was lucky in a way, to get out of this with a rib sprain and a small concussion.

It did help me cure some of the fears I had but sadly not all of them.

Sadly, these events happen more than we think it does. There’s been a dangerous increasing number of cases reported throughout the years but it is still not being talked about enough. The resources for victims are still difficult to find & the judgement from outsiders are still very much present. To anyone reading this, please be careful. I thought I was safe, that it would never happen to me, especially while being surrounded by friends. But it did…and I wish someone and educated me on the matter prior to that night.

I’m still scared to think about the unknowns of that night.

I’m still trying to find the “happy Mary” that found happiness prior to this event.

I’m still in a way, ashamed of what happened, and I think I always will be…

But I won’t let this event define me.

Thank you to the people that helped me while I was vulnerable and for those who’ve reached out since then. I apologize to anyone that has been trying to contact me or seen me, but felt something was off. I’m still learning to cope with everything and find myself again. Thank you for understanding.

Harvey competed in the 200 IM at the World Championships, qualifying for the finals and finishing 8th in a time of 2:12.77. She set a best time of 2:10.22 in the semifinals of the event. She also earned a bronze medal as the leadoff leg of Canada’s 800 free relay in prelims.

The 22-year old was a member of the Canadian team for the Tokyo 2020 Olympic Games. She won four medals at the 2019 Pan American Games and three medals at the 2015 World Junior Swimming Championships.

At the Commonwealth Games, Harvey is also qualified to swim the 200 IM. As of now, she is still scheduled to compete at the event.

Awful. I talked with a former US national team member who in her younger teenage days in a foreign country thought she would go off with the locals to do some more celebrating. Fortunately, the adult men on the team told her “the hell you are. You are coming back to the hotel.” I suspect someone left their wingman (hopefully the wingman wasn’t the perpetrator). More evidence of the human garbage so prevalent. Heal up MSH.

I admire her bravery for coming forward !

I’d admire the bravery if someone that knows something to come forward and tell what they know. Cause believe me, someone knows who did it.

And I’d admire the bravery of someone that knows something to come forward as well. Because more times than not, someone other that the perpetrator knows something.

Waiting to see how many of the Canadian swimmers lawyer up. Swim Canada needs to apply all kinds of pressure to the swimmers who were there, immediately.

Swimcanada’s Statement is horrible. They seem to be 100% focused on covering their butts, and not at all concerned about Mary — just an awful legalize statement. Smells like Atkinson

I feel horrible for Mary, but I also have so many questions –

We need to be more aware of things like this. Unbelievable

Mary. It is not your fault. No need to be ashamed. Find a therapist, friend, family and talk it out. Take care of yourself. You got this.

Awful thing to happen. I don’t understand why her teammates or the team doctor did not phone the police. I suspect because it is a foreign country and they just wanted to get out ASAP.