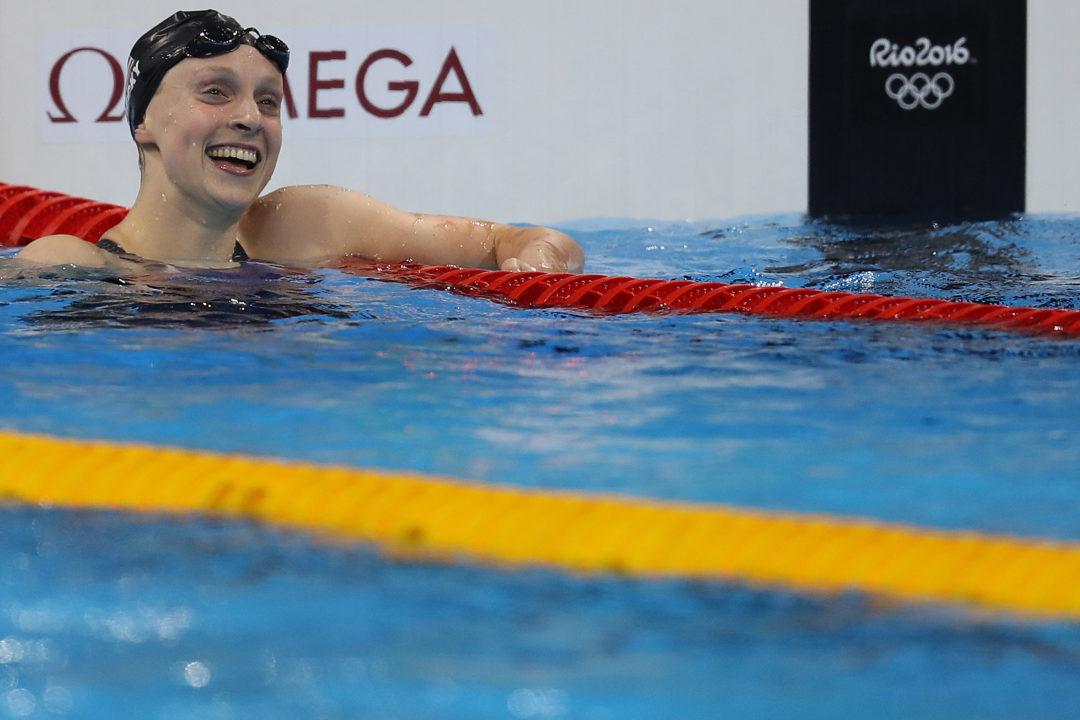 The latest viral video trend (originated by @JimmyDonofrio) demonstrates the length of Katie Ledecky's 17 second 800 free victory by playing Santana's "Smooth" and Vanessa Carlton's "A Thousand Miles" in the between time. Current photo via Simone Castrovillari

**update: the original Santana video was taken down due to copyright issues, but Vanessa Carlton remains.

One of the ultimate benefits of having all eyes on the Olympics every four years is the extended cultural attention on our sport (read: awesome internet memes).

It started with SNL’s Leslie Jones’s hilarious and passionate live tweeting (that eventually led to her flying to Rio and hanging out with the US swim team), then moved on to Lilly King’s finger wag, and the unforgettable Phelps face.

The video shows that in the time between Ledecky’s finish and second-place Jazz Carlin hitting the wall, the Santana song “Smooth” gets all the way past the intro and to the “Man, it’s a hot one” line.

Inspired by Donofrio, Matt Allaire (@AllaireMe) made his own version with Vanessa Carlton‘s “A Thousand Miles,” which makes it through the piano intro and into the line “Makin’ my way downtown…”

Anyone else kind of feel like these sort of videos showing how fast Katie swam is kind of derogatory to the other swimmers? I mean those times the girls put up are still exceptionalyl fast and I feel like now everyone Katie races with are being made fun of and being shown as slow swimmers when in reality they are fast. I feel bad for her competitors

I don’t think it is derogatory; Katie is a true monster in swimming. As exceptional as she is, I do wish more time was spent on the other swimmers. You have to realize, these TV networks want money, and covering Katie Ledecky makes a heck of a lot of money. Same thing for Phelps.