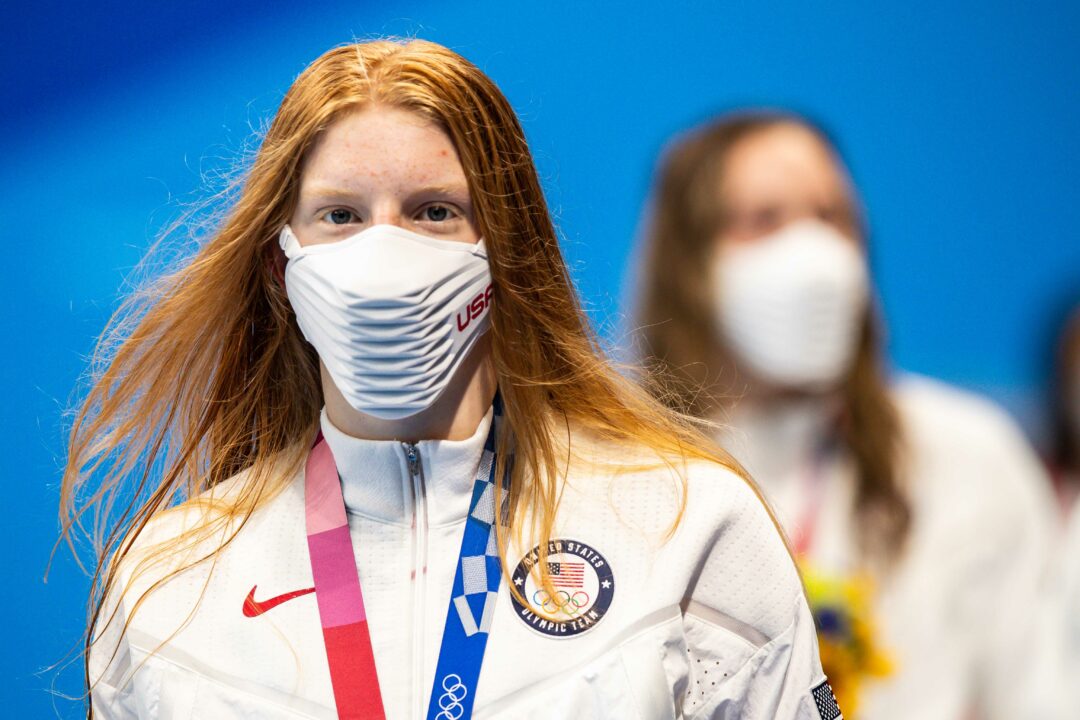 How did Lydia Jacoby handle the pressure at the US Olympic Trials and Olympic Games? It wasn't her first time performing in front of a big crowd. Archive photo via Jack Spitser/Spitser Photography

Alaskan swimmer Lydia Jacoby showed nerves of steel this summer, rising from relative-unknown to Olympic gold medalist. At the U.S. Olympic Trials, she swam a best time of 1:05.28 in the final to qualify for her first U.S. Olympic Team, and making her the first Alaskan to do so in swimming. A month later, she went a best time again in the Olympic final, and at just 17 years old, won Olympic gold, beating out, among others, the World Record holder Lilly King.

How did Jacoby stand up to that pressure at such a young age? The entire population of her hometown of Seward is 2,717. That means it would take at least 3 Sewards to fill the CHI Health Center in Omaha to even the 50% capacity that was allowed for this year’s Olympic Trials.

As it turns out, Jacoby has been performing under crowds for years.

In the video below, Jacoby performs on the upright bass and on lead vocals as part of the Snow River String Band at the Anchorage Folk Festival in January 2018. She was only 13 years old at the time, and the amphitheater appeared full to the brim.

In a world where most of us are afraid to get on stage and sing karaoke in front of our friends, she sang for a jam-packed crowd of people who paid money to watch folk music – which generally means a pretty knowledgeable crowd.

Want to read more about Jacoby’s bluegrass journey? Pick up the latest issue of SwimSwam Magazine for this story and more from inside and outside of the pool.

Love the fact that she’s barefoot in this! True aquatic person.

maybe not to tower even more over her bandmates? the other girl is in heels and still shorter haha

Here for this – and also the Texas commitment has never made more sense.

Believe it or not, Texas isn’t the center of the folk music scene. It’s mostly been elbowed out by the country music scene. Obviously in such a big state, there’s room for everything, but it wasn’t as big as you’d think in Texas.

Asheville, North Carolina is probably the epicenter of the modern folk music revival scene. Places like Minnesota, Maine, Tennessee (more southern/eastern Tennessee, like Chattanooga, than Nashville), and California is where I see most of it thriving. Blue Ridge mountains more than wide open plains.

And of course NYC, because they have everything there.

…my daughter gigs here in Austin. If Lydia wants to gig, the Austin scene is accessible. The best music from this genre I’ve heard live was in Knoxville (after the pro swim). It was surprisingly great.

16
-1
Reply
Just give the trophy to the condors already

Lydia Stark from the North

Mike Lewis captured her arena signing images, and they made me think of the Lydia meme. (I think they’ll be releasing more in the coming months…)

Will the Queen in the north be able to come into the rolling hills of Austin, long ruled by King Edwin first of his name, Lord of Jester dormitory, master of all six squares, GOAT regent of the aquatic colleges, and may she raise a banner of her own? For the training cycle is dark and full of terrors, and the cavalry in the Virgin Hills of Charlottesville have raised a fine army. I know not how this ballad will end I just praythee it may end in a more dignified and sensible conclusion than that of the Game of Thrones

No wonder she has “ ice water”in her veins and was able to handle so many high intensity meets with great performances. Standing in front of large audiences and speaking/performing has been shown to be one of the most stressful situations of young adults in this modern era( social media, lack of personal interaction etc) . She has hit a “ home run” in and out if the pool!

I’m sincerely happy for Lydia and her family & community for her personal and swimming accomplishments. However, I think her situation raises some cause for concern and attention.

While social media and never-ending exposure are becoming normal, I think the deeper spirit of swimming and cameraderie should also drive a different discussion.

Legal-age minors signing NIL contracts, televising high-school sports, and massive social media followings of youth sports stars is normalizing public exposure to the point where it isn’t even a choice.

Is this healthy? Why do we swim and compete? I know that I did for the positive connections and all the healthy aspects that participation granted.

At the very least, like it or not, I think we… Read more »