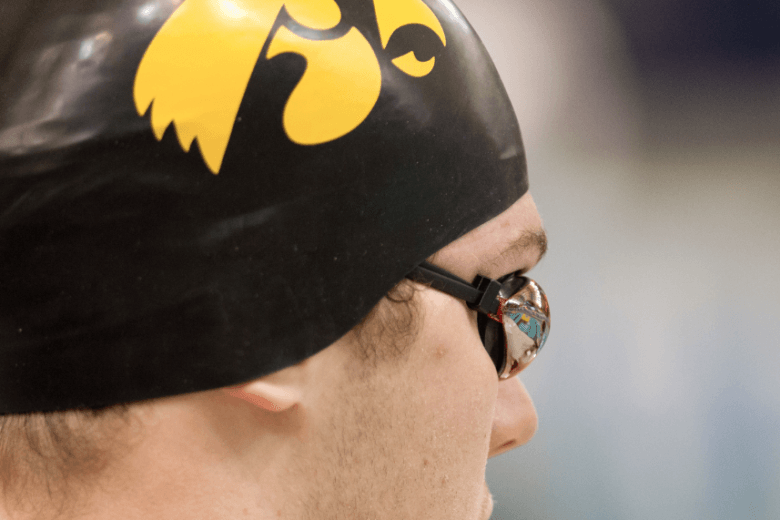 “Across the board the men had some great performances, again this is all part of our process in preparation for the Big Ten,” said coach Marc Long. (Photo Credit: Tim Binning, theswimpictures)

College Swimming: The University of Iowa men’s swimming and diving team won 10 events en route to a 161-122 victory over the Northwestern on Saturday at the Campus Recreation and Wellness Center Pool.

“We have to go through things, take a look at the results and the video,” said UI head swim coach Marc Long.  “Across the board the men had some great performances, again this is all part of our process in preparation for the Big Ten.”

The Hawkeyes kicked off the meet with a victory in the 200 medley relay. Sophomores Grant Betulius and Korey Schneider and seniors Byron Butler and Jordan Huff swam a time of 1:28.68 to finish first in the event.

Iowa collected first and second place finishes in the 200 freestyle. Huff swam to the victory in 1:39.01 and freshman David Ernstsson finished second 1:39.11.

Trussov went on to collect another win in the 200 breast. The freshman touched the wall in 2:00.68 to post the victory, while Marciniak finished third with a time of 2:03.64.

Freshman Addison Boschult picked up first and second place finishes. Boschult won the platform dive with a point total of 293.33, and recorded 275.03 points to finish second in the 1-meter.

The Hawkeyes return to action next weekend when they travel to Evanston, Ill., to compete in the Northwestern Invitational.

The University of Iowa women’s swimming and diving team posted a 162-135 victory over Northwestern on Saturday at the Campus Recreation and Wellness Center Pool. The Hawkeyes won 10 events to move to 6-1 on the season.

“It is a great win for the program, it has been a long time since the women have beat Northwestern,” said UI head coach Marc Long. “Northwestern is a quality program, and we have a lot of respect for them. We are happy to get the win, but we still have to look at the big picture, which is the Big Ten and the NCAA’s.”

The Hawkeyes kicked off the meet with a victory in the 200 medley relay. The quartet of sophomore Heather Arseth, junior Karolina Wartalowicz, junior Abbey Tuchscherer, and freshman Olivia Kabacinski swam a time of 1:44.55 to win the event.

The Hawkeyes dominated the 200 freestyle, collecting first, second, and third place finishes. Junior Lindsay Seemann swam to the wall in 1:50.41 to take the victory. Junior Emily Hovren touched in 1:50.62 to finish second, and Kabacinski finished in third (1:50.62).

Junior Haley Gordon swam with urgency to win the 100 fly. She touched the wall in 56.85 to take the victory. Iowa complered the 1-2-3big finish whenTuesday teammates freshman Ashley Horodyski and Tuchscherer finished second (56.96) and third (57.22), respectively.

Junior Abby Grilli picked up a second place finish in the 1-meter, accumulating a point total of 269.47. Juniors Lauren Kelba and Joelle Christy finished in fifth (255.83) and seventh (244.43). Christy finished in second in the platform dive with a score of 234.75.

The Hawkeyes return to action on Feb. 1 when they travel to Evanston, Ill., to compete in the Northwestern Invitational. Participating teams include the host Wildcats and Nebraska.

Go Hawks. Coach Long is doing a great job there.