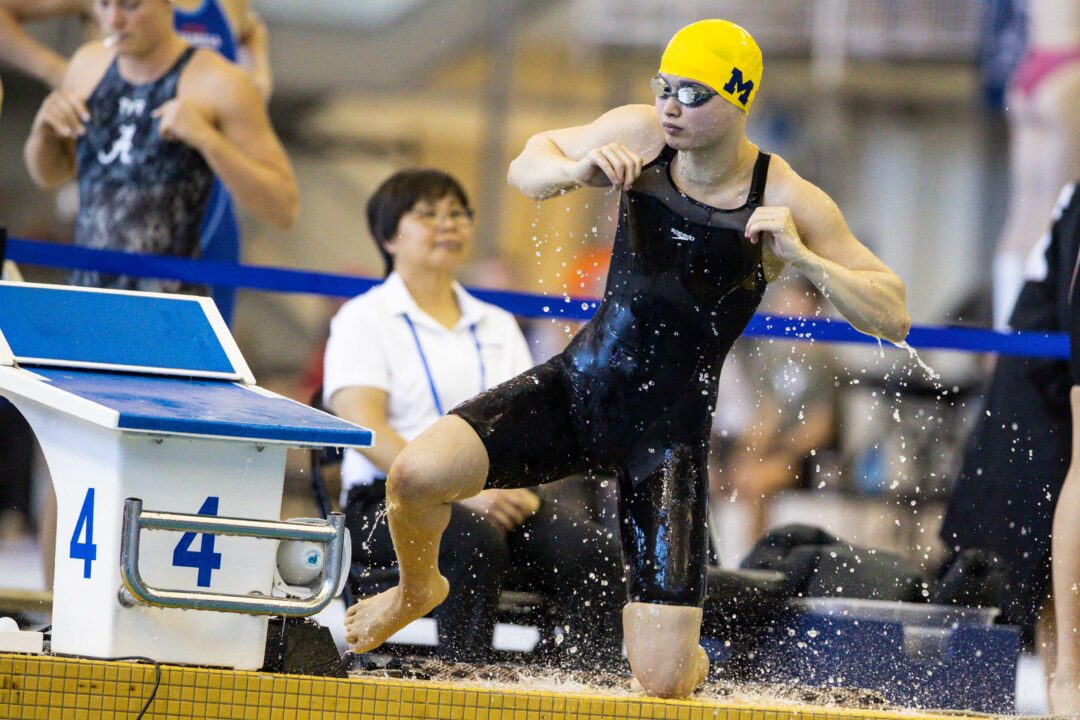 Michigan's Maggie MacNeil isn't the only big-name women's NCAA transfer this off-season, but she's the one due to have the biggest impact. Archive photo via Jack Spitser/Spitser Photography

The NCAA Transfer Portal is heating up. With so much transfer activity, now feels like a good time to step back and take a look at how the highest-profile moves might reshape the NCAA landscape next season.

So far in 2022, on the women’s side, we have seen 4 swimmers and 1 diver announce transfer decisions who could be considered NCAA-impact recruits at almost any program in the country.

Here’s how they’re going to impact their new programs.

We don’t know yet which swimmers will return to Cal for a 5th year, and senior Izzy Ivey’s decision will go a long way toward determining the short-term future of this team, but the Cal women were in for a tough year next season without the addition of MacNeil.

Cal finished 8th at last year’s NCAA Championships, which was their lowest since another 8th-place finish in 2005. They haven’t finished lower than 8th at NCAAs since 1996, head coach Teri McKeever‘s fourth year leading the program.

The team still has some very good pieces returning, regardless of Ivey’s decision. Rising junior Isabelle Stadden, for example, is a bona fide international-caliber swimmer, and freshman Leah Plonsky was surprisingly-good as a freshman. Rachel Klinker and Ayla Spitz are solid point-scorers, too.

But where Cal is really in trouble next season is the sprint free relays. On the team’s 11th-place 200 free relay from last season, Ivey and Elise Garcia were seniors, while anchor Emma Davidson is in the NCAA transfer portal (though sources indicate that might be a 2023-2024 transfer). That’s basically the same story for the 400 free relay. The best candidate to fill those slots, Emily Gantriis, was 48.44 as a freshman but is also in the Transfer Portal.

Ivey’s relay splits (46.34 in the 400 free relay) kept Cal in the points last season, but without MacNeil, that would have been hard to repeat for 2023. In short: the Canadian 5th-year gives them an insurance policy if Ivey doesn’t return that should keep Cal in the top 10. If they have Ivey and MacNeil, McKeever and her new assistant Jesse Moore will have a big platform to begin their rebuilding project.

At the fully-opposite side of the spectrum is World Junior Champion Maxine Parker. She joins a Virginia squad that, on first glance, doesn’t need another sprinter (though every program wants more sprinters).

Virginia won the four short relays at last year’s NCAA Championship meet, and all they lose from that group is breaststroker Alexis Wenger, and they bring in another loaded class of freshman to begin their next wave of building.

But because of the team’s most-unusual mix of versatile talent from the likes of Kate Douglass and Alex Walsh, Parker still could prove useful to those relays.

Where, exactly, Parker becomes valuable partially depends on how the Cavalier freshmen develop. But the pivot point is this: Virginia’s next two best breaststrokers, Walsh and Douglass, swam respective times of 58.36 and 58.64 mid-season last year on flat-starts, and can almost definitely roll 57s (if not better). Those two also happen to be among the team’s three best sprint freestylers (Douglass anchored both medleys), and not-too-shabby in the 200 freestyle either.

So, if the Virginia plan is to move either of them to a breaststroke leg, or even move Douglass to the 800 free relay in a hail-mary chance to catch Stanford and sweep the relays, that opens up a spot.

Part of where Parker slots in depends on how she develops relative to the pertinent freshmen: Carly Novelline (22.26/48.46 freestyler), Zoe Skirboll (22.87/49.65 freestyler, 1:00.19 breaststroker), Emma Weber (59.03 breaststroker), and South African import Aimee Canny could all have a word in those decisions.

Parker is already an individual-scoring caliber performer who can bump up the Cavaliers’ individual points. In a best-case scenario, she gives Todd DeSorbo a few more options to play with and some more margin-for-error on relays if someone’s having a bad meet. The treasure chest just keeps getting deeper in Charlottesville.

The Texas women have to be feeling good about themselves after jumping up and picking off Stanford and their pile of Olympians for 2nd place at the NCAA Championships.

Now to add Luther, who was 4th at NCAAs in the 200 fly, to the mix, and they are probably thinking about how they can do it again next year.

Texas will have four of the A-finalists in the 200 fly from NCAAs on their roster next season, and probably the best single-stroke group of any NCAA women’s program in the country. If Carol Capitani can manage that and keep everyone happy, they can soar.

Texas doesn’t really *need* Luther on the medley relays, but she could provide some motivation to incumbent Emma Sticklen to stay sharp.

While Luther wasn’t on Georgia’s 800 free relay, she has a personal best of 1:45.36 in the 200 free from high school that is interesting if Texas tries to develop that. The Longhorns’ slowest split at NCAAs last year in the 800 free relay was a 1:45.03 rolling start from Olivia Bray (another 200 butterflier).

Brooke Zettel swam just a semester at Florida, and it didn’t go well. At the team’s mid-season invite, she was well-off her best times in her primary events, the 200 and 400 IM, and that was the last meet she swam for the Gators.

Back home in North Carolina, she seemed to maybe shift her focus a little, racing more single-stroke events and fewer IMs. She was back in the 200 IM at the US World Team Trials, along with the 50 and 100 breast (she swam the 100 fly at the Olympic Trials a year prior).

She now joins a Virginia Tech squad that has improved quickly on the men’s side under Sergio Lopez, but that has been slower to see gains on the women’s side, though a few standouts like Emma Atkinson show the signs of the future.

If Zettel recaptures her form, she can contribute to the Hokies in a lot of ways. Individually, she’s already close to NCAA B-Final times and would score big points at the ACC Championships. On relays, Virginia Tech needs help in both their breaststroke and butterfly legs. The Hokies were just 8th in the 400 medley at ACCs, and that was before losing both their top breaststroker (graduation) and top butterflier (transfer).

So Zettel at least offsets the transfer of Luana Alfonso for the Hokies and helps keep their momentum upward. It’s hard to get much room to breathe in an incredibly-crowded ACC, but Virginia Tech was only 15 points behind Notre Dame for 6th place last year. Zettel can close that gap, all else equal.

Carolina Sculti will use her 5th year of eligibility to transfer between Pac-12 rivals Stanford and USC.

Divers don’t usually swim relays, so her 12 individual points via a 7th-place finish at NCAAs last season is the most basic answer to how she’ll impact the team.

Looking more broadly, though, she could be the start of a revival for USC’s diving program. Once one of the best in the country, the Trojans haven’t had a top 8 finisher at NCAAs in diving since Haley Ishimatsu won the NCAA title on platform in 2014 and finished 2nd in 2015.

With Pac-12 diving generally fairly weak right now, a diver of this caliber could reset the recruiting conversation for USC, and should go a long way toward a push to catch Cal for #2 in the conference. The Trojans were only 27 points behind the Golden Bears in 2022.

Some of these are definitely impactful, but at least one just seems like best-case optimism.

Divers don’t usually swim relays, so her 12 individual points via a 7th-place finish at NCAAs last season is the most basic answer to how she’ll impact the team.

This is an awesome sentence. Obviously generates the question – have there been any divers that also did a swimming event, or vice versa? Doubtful, but still curious if there’s a record of that anywhere.

Not at the highest levels. There have been some divers who were good enough to swim on C or D relays for more than just the sake of novelty at a dual meet.

I went to HS with a girl who qualified for the Texas (6A – though it was called 5A at the time – the big school meet) in both swimming and diving. That was pretty impressive. She wound up at Henderson State.

For breaststroke, Virginia also has Anna Keating who had a huge meet at US Trials, and Jaycee Yegher transfer from Harvard who’s best time would make NCAA’s.

Also, Aimee Canny is a huge wild card for them. Lots of options

Totally agree about Canny, and a lot of people (myself included). Absent some adjustment issues, she’s basically a lock for the 4×2 relay – and should be in the mix for the 4×1. Then they also have Novelline coming in at 48.4. And Tiltmann gave them a 47-mid relay split this year. You figure Walshx2 and Douglass are locks for the 4×1 — so that’s 4 terrific swimmers battling for that 4th spot. They might try Douglas in the 4×2 just to try to win all 5 relays. But with Curzan at Stanford, they might just want to lock down the 4 shorter relays.

Are they even eligible to do so? Theoretically could a swimmer on the roster use diving as an event and if so why would any team NOT have three divers.

This is galactic brain stuff here.

If they swim relays, they count as a full roster spot.

(Usually, if a rules loophole seems so obvious, and nobody is taking advantage of it…………………there’s a reason).

I think the Cal men have talked about putting swimmers on the boards for duals but they weren’t allowed to do so.

At my high school we could put divers in swimming events and we ended up losing a conference title by a couple points because we didn’t put a random diver in the 100 free where there were fewer than 16 entries!

I am betting Parker will be the biggest impact transfer.

I would like to take the other side of that bet.