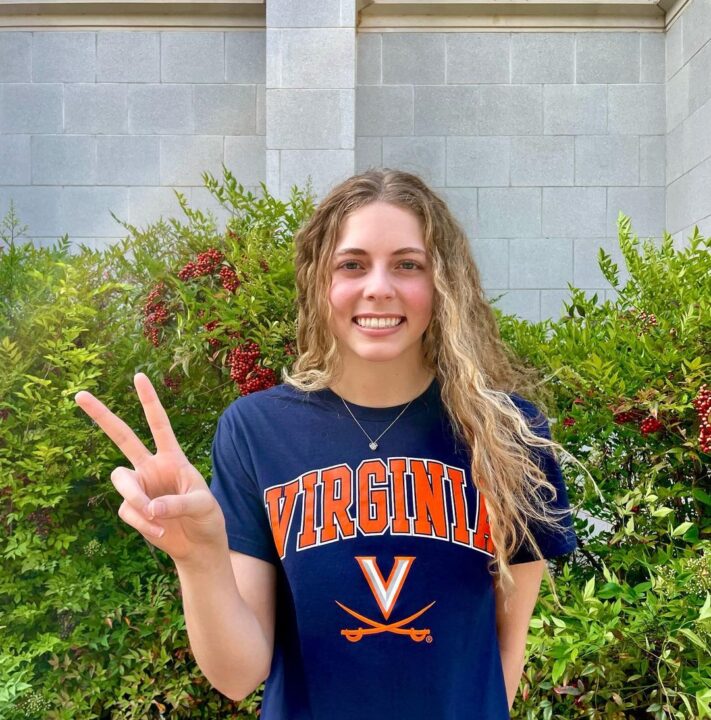 Parker will add on to Virginia's already incredible depth in the 50, 100, and 200 free, and could be a key member of their 800 free relay next year.

In March, we reported that former Georgia swimmer Maxine Parker had entered the transfer portal. Today, she announced that she would be transferring to the University of Virginia for the 2022-23 season. She will have two years, plus a bonus COVID 5th year, of eligibility remaining.

Given that the Virginia women are already the biggest powerhouse swim team in the country, winning the last two national titles, the addition of Parker only makes the rich get richer. She will provide the Cavaliers NCAA valuable points next year if she figures out how to peak and swim season bests at NCAAs.

Virginia is already dominant in the sprints. They have reigning 50 and 100 free national champions Kate Douglass and Gretchen Walsh, and Lexi Cuomo also helped score in the 50 free last season by placing 14th. They have American-record caliber 200 and 400 free relays, and all members in both of these relays will be returning next season.

However, the 200 free is one of the “weaker” events for UVA. At NCAAs, it was one of the only events where the team did not have anyone make the A-final (Alex Walsh‘s ACC-winning time of 1:42.28 would have been third, but she chose not to swim the event). Their highest and only scoring finisher, Reilly Tiltmann, placed ninth with a time of 1:43.55. Parker didn’t compete in the individual 200 free at NCAAs, but her relay leadoff would have finished 11th.

More importantly, Parker could be crucial to UVA’s 800 free relay, the only relay that they did not win at NCAAs (they finished second to Stanford). Her best time is faster than the 1:44.80 anchor leg that Emma Weyant produced at NCAAs, and there’s no reason that Parker wouldn’t be able to split 1:43-point on a relay start with a 1:44-low flat start time. With Stanford losing Brooke Forde, a member of their NCAA-winning 800 free relay this year that won by over five seconds, Parker is potentially the key for the Cavaliers to cut the deficit between them and the Cardinals.

Here’s how Parker’s best times would look on UVA’s depth charts compared to the members of their 200/400/800 free relays at NCAAs (NCAA relay splits included):

Considering that all of Parker’s times are competitive with all of Virginia’s freestylers, the question of whether to include her on the team’s 200 and 400 free relays might make Todd DeSorbo‘s job a little more interesting, while putting her on the 800 free relay is a no-brainer.

Parker won the silver medal in the 50 free at the 2019 FINA Junior World Championships, and won gold as a part of Team USA’s mixed 4×100 free relay. Prior to college, she swam for Chelsea Piers, the same club that her future college teammate Kate Douglass swam for.

Don’t know if they overlapped but both Walsh’s briefly swam for cpac too. Would be funny to see four kids who swam on one club team compete on the same relay at ncaas.

The 400 medley falls on the same day as the 200 free/100 back double for Reilly Tiltmann. Because of that I think it’s likely Gretchen on back. They’ll figure out the fly/free combo – so many options.

Welcome to The Hook, Maxine Parker!

Hoos are just ridiculously stacked for a threepeat.

Huske Curzan gonna be the next Douglass Walsh

Stanford gets better next year, but Virginia brings in more points than they lose from the 2022 scoring at the NCAA meet. Like this year’s Texas men, Virginia is a prohibitive favorite to win it again in 2023 but the meet is scored in the pool, not on paper. Anything is possible but the Lady Hoos are definitely the team to beat next year.

UVA is too loaded an loses too little (largely just Wenger) — and is adding too much. I don’t see 2023 being too competitive even with Curzan arriving at Stanford. Maybe in 2024 this meet could get more interesting b/c UVA will lose a massive class of Douglass, Ellan Nelson, Cuomo, and Donahoe. But that’s assuming none of them take their bonus covid year — and that’s not necessary a safe assumption (notwithstanding the precedent set by Paige Madden and Wenger).

She is a massive team hopper. Should be interesting.

Some call it team hopping. Others call it strategic.

And a phenomenal school.

How could anybody downvote UVA as a phenomenal school? That’s just sore feelings because you’re talking #4 public university in the country(as high as 2 and as low as 5 over 20+ years).

Some call it strategic, others might say desperate. 7+ Club teams? If someone knows that her family had to move 7+ times for work and not to chase the family plan, I will apologize. It just doesn’t seem unfathomable know how crazy some swim parents are.

Then feel free to apologize. Please go to Linkedin and do a little research instead of popping off and hoping everyone is lazy. All of these keyboard warriors are funny.

@harmon
It’s a shame how (haters) just don’t want to see kids succeed…if Parker feels UVA is a great fit, then good for her for having the courage to find the right place for her!

@harmon don’t get negative comments. Super strange….Maxine is a great kid and UVA is lucky to have her.

Mags/Harmon – please follow SwimSwam commenting guidelines by sticking to just one username in a given comment section. Thanks.

Time for Hailey Galbraith to step up for the Dawgs!

I like this, Tiltmann can focus on the backstrokes and 200 free and leave that 400 free relay spot to Parker now

That’s very possible . . . or Tiltmann might LIKE to swim on an American Record relay and will fight to keep her spot. It’s at the end of the meet and doesn’t impact her other swims at all.