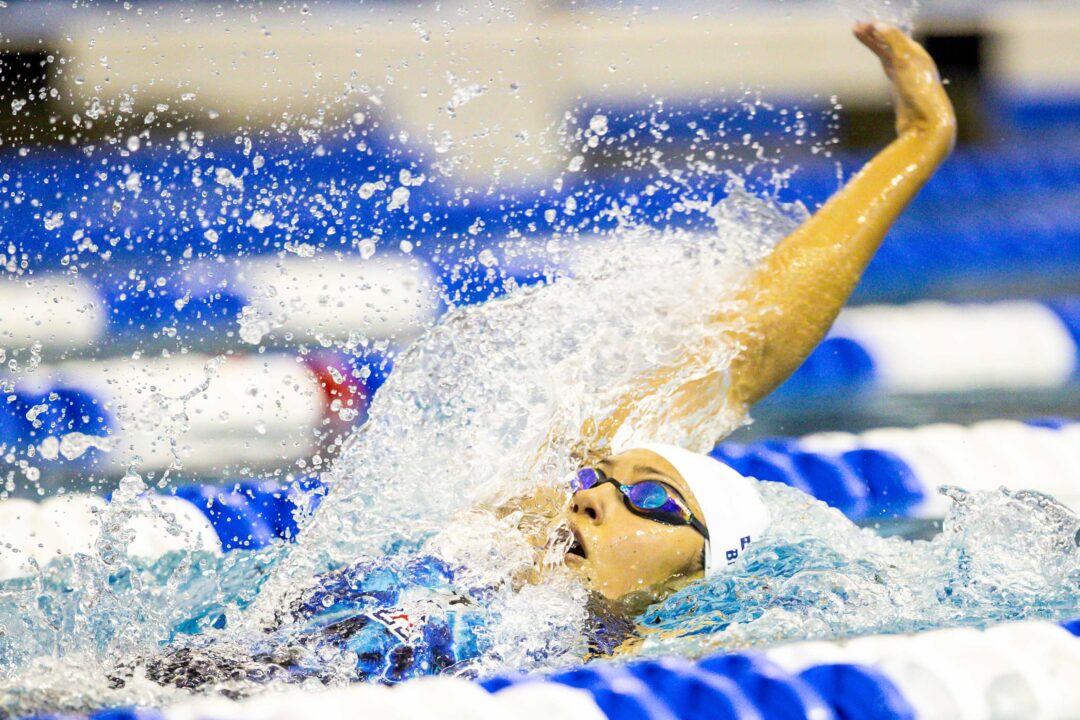 Bernal was the only swimming point scorer at NCAAs this year for the Arizona women, finishing 12th in the 100 back with a time of 51.24. Archive photo via Jack Spitser/Spitser Photography

Four-time NCAA qualifier and Arizona swimmer Aria Bernal has entered the NCAA transfer portal. After completing her first four seasons with the wildcats, she has one more year of eligibility left, the COVID-19 fifth year. Because Bernal has only entered the transfer portal, she is allowed to communicate with other schools and their coaches. However, this does not mean that she is required to transfer from Arizona.

At Pac-12s this year, Bernal was 4th in the 100 back, 7th in the 200 back, and 20th in the 200 IM. She scored 55 points for Arizona to contribute to the their fifth-place finish, the third most on her team behind diver Delaney Schnell and rising junior Julia Heimstead.

If Bernal ends up transferring, the Arizona women will lose one of their three NCAA swimming qualifiers from this year (Heimstead and rising senior Jade Neser) and their only point scorer on the swimming side. At NCAAs this year, the Wildcats finished in 19th with 53 points. Four of those points were scored by Bernal, and 46 were scored by Schnell, who finished second, fifth, and seventh in the 10-meter, one-meter, and three-meter diving events respectively.

Jade Neser is in the transfer portal. Top relay performer Alayna Connor is not returning for her 5th year of eligibility either. Augue does not know how to run a team, much less a womens program

Have these athletes completed their undergrad and are looking for a graduate program? College coaches can’t guarantee their athletes a spot in a graduate school, so they may be applying to other schools. Or UA might not offer a grad program in their perspective field. So many factors that commenters may not take into account before jumping to the “Augie sucks” narrative.

They historically have and I’m sure one of 3 All Americans would have been offered their scholarship. Find me one positive Arizona article since this hire. Proof is in the pudding. Imagine if he never inherited Fail or Schnell. The apple clearly falls far from the tree and is rotten.

How could you dislike this statement? Please disprove the facts above. What has gone well? Who did he recruit? Transfer if you can! Run!

There are scores of other athletes improving there. Some haven’t, I get that. But it’s the same story at other schools too. That’s the nature of college swimming.

And before you call me a stalker- I’m not. But as a mom of a kid in the midst of recruiting, we do sit down and track progressions, so our… Read more »

There will be more to come…UA needs to cut their losses.

Way past the time. Admin obviously does not care about the state of the program.

And never get another position

Rumor has it that Jade Neser is also in the transfer portal…….and several other girls

At this point who isn’t in the portal. I’m talking about every swimmer everywhere it seems like the thing to do right now.

No, the portal has become the athlete’s equalizer. How many coaches out there would jump ship in a heartbeat if they got a better offer?