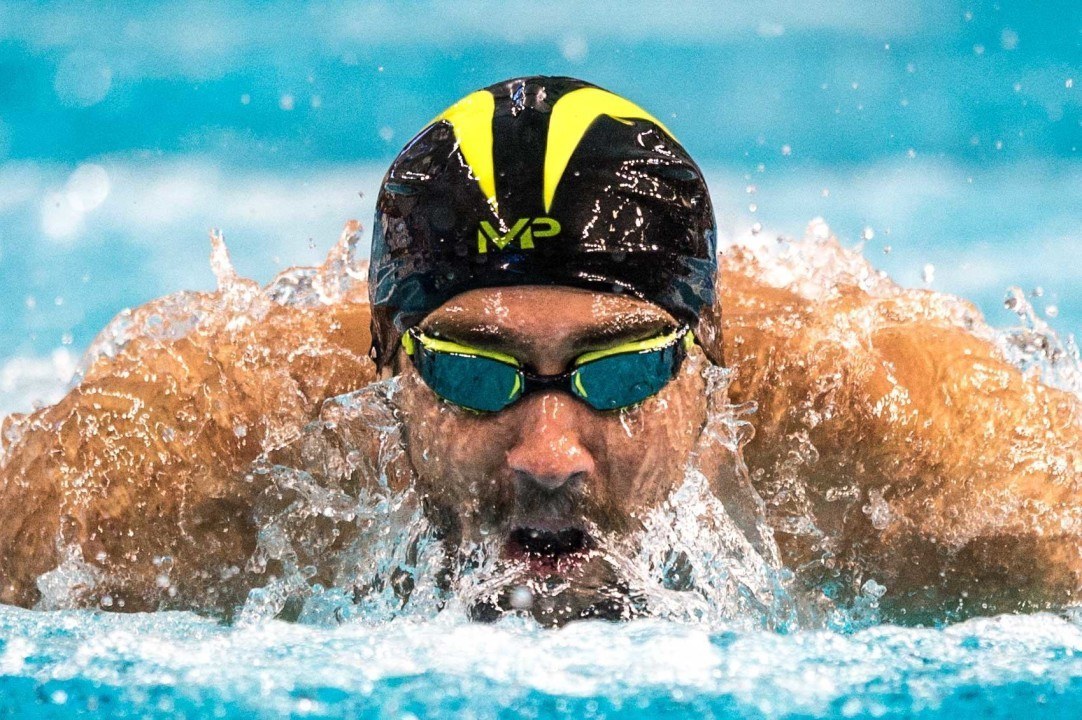 As swimming fans, we should all count our blessings that Michael Phelps has decided to give it one more go.... Current photo via Mike Lewis/Ola Vista Photography

As swimming fans, we should all count our blessings that Michael Phelps has decided to give it one more go. Not for some selfish desire to see the greatest of all time fight off his younger competitors. No, because we get to see the final steps of Michael Phelps evolution as a swimmer.

At 30 years old, Phelps can no longer simply overpower his competitors with raw horsepower. This final edition of Phelps must finally touch up some of those skills that he’s been able to avoid all these years.

Yesterday, we brought you the interview in which Michael revealed that he has been trying out a whole new finish. As Phelps describes it, he begins dolphin kicking while swimming freestyle. He drew inspiration from Michael Klim’s 2000 Olympic performance. First, let’s watch the Klim swim he’s referring to:

Klim’s leadoff set the tone for Australia as they beat the Americans in the 4×100 Freestyle in Sydney. Klim broke the world record in the 100 freestyle leading off. Slow the video down to 1/4 speed at around 0:38 and you can see clearly that Klim is no longer kicking freestyle and instead has his switched to a dolphin kick.

Flash forward to Phelps at the finish of the 200 IM this weekend:

Right after 4:10 in this video is where Phelps switches to dolphin kick. It’s effective as Phelps closes out Lochte to take the win. One of the dirty secrets of Michael Phelps‘ swimming is that he actually hasn’t been very skilled at finishes up to this point. Let’s take a look at the last big international race between Phelps and Lochte (the 2012 Olympics):

Incredible times for both of them, but watch the finishes closely. Phelps is clearly makes some “age group” mistake in an Olympic final. His final stroke is lunging, too long and he loses speed into the wall.

Even in the race that Michael considers his best effort, the 200 freestyle where he shattered his own world record in Beijing, his propensity to slow down into walls is on display. At the time we were all so wowed by the performance that probably few of us (save Bob Bowman) took notice of the momentum lost into the turns and finish:

Phelps was disappointed in his 200 freestyle over the weekend. It’s clear that Phelps still struggles somewhat with his turns, but his bigger problem this weekend was lack of raw speed to cover up for those weaknesses. Still, you can see that even when the race is not going his way Phelps is working a better finish:

The story was the same in the 100 freestyle, too little speed and too little skill improvement to make the difference that Phelps needs on this race:

Phelps’ fly turns are another story, however. Like his freestyle turns, Phelps was not always very sharp on the wall even when dominating in the butterfly. His long stroke means that he often approaches the wall on a stroke that is a little bit too long. In the past this hurt him more, but he’s figured out how to make the best of that awkward approach. Check out his 100 butterfly this past weekend:

When looking for videos of Michael Phelps in his prime, there are often cutaways to an underwater view on the turns. However, Phelps in this era was still a bit sluggish on the wall and reliant on his superior conditioning, rather than skill:

It’s clear that here in the twilight of Phelps’ career, he won’t be able to simply overpower this competitors. It’s also clear that he’s making pointed improvements to his skills, particularly fly turns and freestyle finishes, that should help him to even the odds. The Michael Phelps that could win eight gold medals may be gone, but in his place is still a great swimmer improving skills.

2012 is probably a bad comparison, considering his training habits after 2008, or as he put in on Joe Buck’s show “what training? My training for 2012 was a joke. “

Chris, I’m not challenging your overall thesis here, but if you buy the goggle leak issue during the Beijing 200 Fly I don’t think you can use any hesitation on walls in that race as evidence of lazy fundamentals–that’s potentially him just trying not to break his face. I’d think there is more support for your argument in some of races since 2011 where MP was not well tuned up and his walls were reaaaally long, often by his own admission.

And he used to chop a bunch of his fly turns, too. 2011-2012 Phelps was just pretty sloppy in general, I remember making 10,000 comments on this here site back then whining about it, hahah.

I don’t believe phelps has lost all the raw speed you suggest. I think it’s a product of very heavy training, as is traditional in Bowman’s program over Christmas.