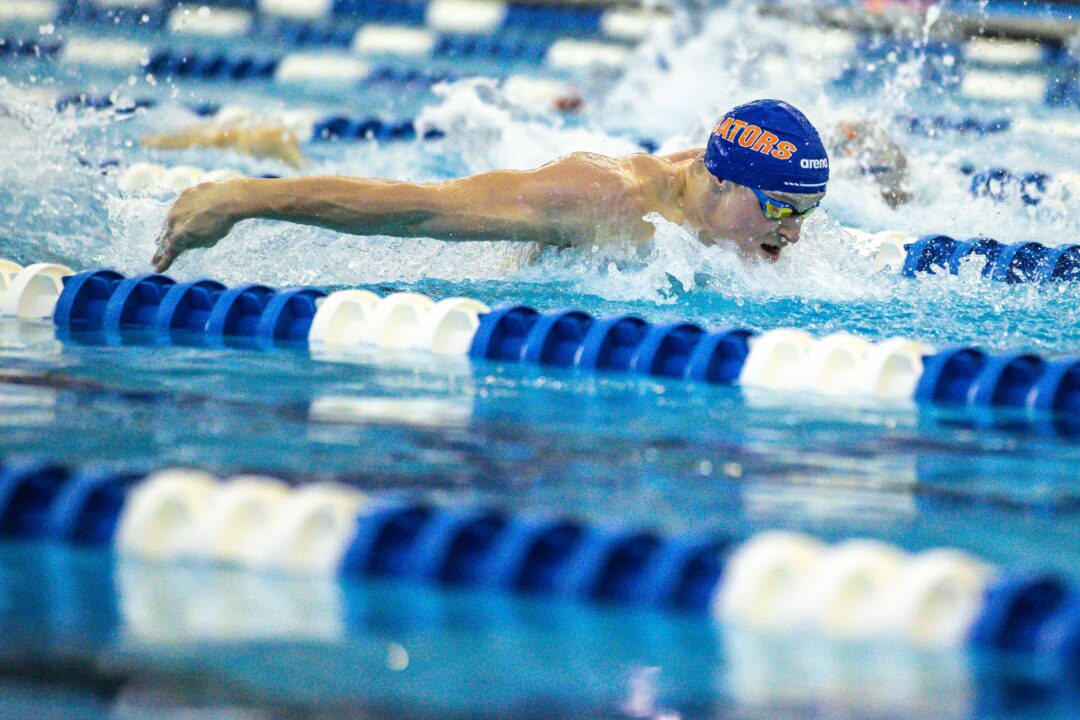 Florida's Eric Friese, who hails from Germany, tied the fastest 50 fly split of all time tonight with a 19.36 to lead the Gators to the NCAA title. Current photo via Jack Spitser/Spitser Photography

Editor’s note: this list was compiled by hand. If we missed someone, please let us know in the comments below

While the 200 medley relay tonight was without a doubt the fastest field ever in this relay, with four of the five fastest times ever coming tonight, an interesting quirk remains: nobody was close to breaking Cal’s 2018 American Record.

As a reminder, in order to be eligible to break an American Record in a relay, all four swimmers must be US citizens and hold US Sporting Citizenship.

Of the top 16 teams this evening, only three, Arizona State, Virginia and Auburn were eligible to break the American Record. Arizona State was the top finisher of that trio, coming in 6th in 1:22.25.

Of the four teams that came in under Cal’s American Record, all of them had international swimmers on their team. NCAA champ Florida had Germany’s Eric Friese split a crucial 19.3 on the fly leg, Texas breaststroker Caspar Corbeau represents The Netherlands internationally, Cal backstroker Bjoern Seeliger, the newly-minted fastest 50 backstroker of all time, hails from Sweden and NC State’s first three legs included Poland’s Kacper Stokowski and Rafal Kusto as well as Dutchman Nyls Korstanje.

It raises an interesting question: why is this relay so dominated by non-American swimmers?

One likely explanation is that the 50s of stroke continue to be held in high regard internationally through senior-level swimming, while most American meets do not include the 50s of stroke past the age of 12. USA Swimming’s own selection criteria for stroke 50s at the World Championships often does not account for swimmers who are 50 “specialists” and oftentimes places at least one of the 100 individual qualifiers into the 50.

With the advent of the ISL in recent years, some American swimmers have begun to specialize in the stroke 50s, though after their NCAA careers ended. Madeline Banic, a former Tennessee Lady Volunteer who now swims for Energy Standard in the ISL, has carved out a niche for herself as one of the top SCM sprint butterfly swimmers on the planet.

For the time being, however, we all get to enjoy some fast swimming, regardless of country of origin.

No one close? A bit of hyperbole, .37 for ASU is not that far. Try hitting that on your stop watch, it’s approx less than just 1 freestyle stroke.

MacAlister of Stanford is Australian

Was just about to say this too

Nyls is the flying dutchman confirmed

Thanks SwimSwam for such fast reporting! Interesting to see exactly who hails from where and crazy to see how many relays in the top 16 have international students when you put it together in one table like this.

Yeah – it’s not exactly inconceivable that “rest of world” might produce someone who’s faster over 50m than Americans of a similar age, and I don’t think it’s because rest of world get to race 50s.

Ranomi is a poor example of a swimmer “making a career out of the stroke 50s”. Gold in the 50 and 100 free at the Olympics, WR in the SCM 50 free, she was a freestyle specialist.

Agreed. Kromo was a poor example. If you win Olympic gold in the 100 Free (and 50 Free!), you are no limited to only being able to swim a 50 Fly, like this article makes it seem.

I would think that in the future the 50s of stroke will become more commonplace at American meets. IMO they are much more exciting to watch and swim than some other events

I agree about them becoming more commonplace. You already see them contested at some larger meets: Sectionals, some (junior) national meets (like NCSAs).

Australia has neglected them too but this year has introduced them at age championships.