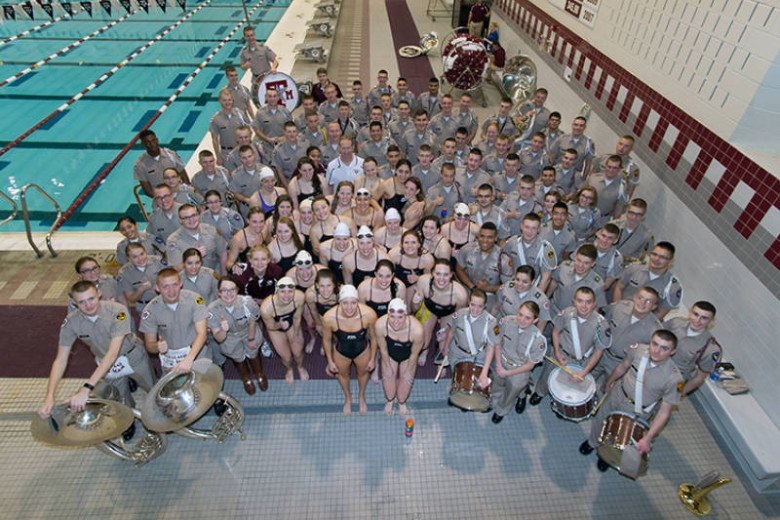 The Texas A&M band showed up to play out the Aggies' undefeated season on Saturday in College Station. Current photo via Texas A&M Athletics

The Texas A&M women sent out their senior class, which depending on what happens in March has the chance to be the most successful senior class in women’s program history, sent themselves out in sterling fashion, topping the North Texas Mean Green 153-97 at home on Saturday.

That completes an 8-0-1 season for the Aggies, with that lone blemish being a tie with the defending NCAA Champions from Georgia.

Injuries kept this from being an even more tearful outgoing class for Steve Bultman – this group came to campus with another U.S. National Teamer Sarah Henry (who’s a redshirt junior) and another Mexican Olympian and National Record holder Lili Ibanez (also a redshirt junior).

Also included in the class is All-American Melanie McClure.

That class combined to win 10 out of the 12 individual events at the meet.

The Texas A&M Seniors with their parents as the Fightin’ Texas Aggie band plays in the background. Courtesy: Brad Marquardt

Larson was battling a little bit of back soreness in the last few weeks after she was rear-ended by a truck that caused her to miss the Aggies’ road-trip to LSU, but all reports of it just being “precautionary” and the injury not being serious seem to have held true. Larson won the 100 breast (59.61) and the 200 breast (2:10.11) in some of the best second-semester times we’ve seen so far for the American Record holder.

Also a part of that class, Dittmer won the 50 free in 22.94, which is a time that’s as good as we’ve seen from a lot of the star sprinters around the country this weekend (Geer and Lobb out in Arizona come to mind).

The Aggie women are done, while UNT will have a meet on January 5th against TCU.