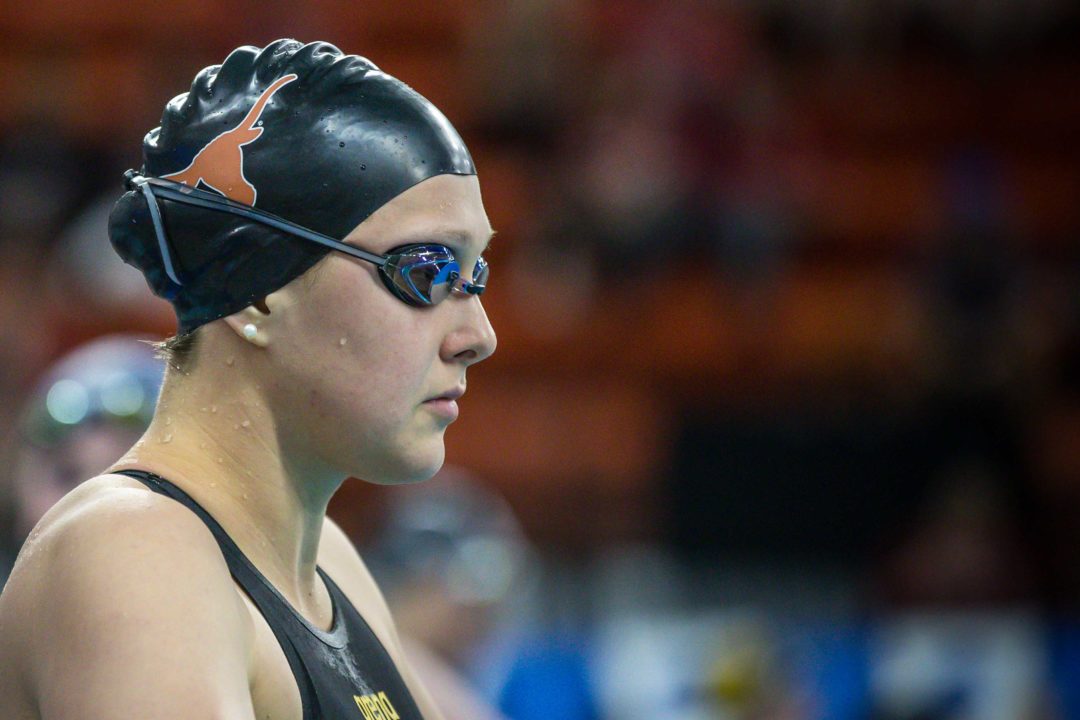 Julia Cook was part of the Texas 400 medley relay that posted a school record and nation #1 time of 3:26.86 at the Texas Invite two weeks ago. Current photo via Jack Spitser/Spitser Photography

Editor’s note: the College Swimming Coaches Association of America (CSCAA)’s rankings track dual meet strength, specifically. That is, a higher-ranked team is expected to win in a head-to-head dual meet with a lower-ranked team, according to the voters. These rankings aren’t an NCAA finish prediction – for a ranking closer to that model, check out SwimSwam’s Power Rankings, coming soon.

The College Swimming Coaches Association of America (CSCAA) has released their third round of Division I polls for the 2020-21 season, with a new leader on the women’s side: the Texas Longhorns.

The Longhorn women jumped from #2 to #1, with the Texas Hall of Fame Invite seeing them break several school records, largely at the hands of a stellar freshman class. On the women’s side, Virginia also popped up from #4 to #2, pushing former #1 Georgia down to #3. NC State moved from #7 to #4, Tennessee from #9 to #5 and Florida from #10 to #7, while Texas A&M, Louisville and UNC moved up several spots.

One team, Arkansas, appears after not being ranked at all this season. They’ve leapt up to #17.

Texas’s men hold on to their #1 ranking, but after Georgia’s huge mid-season meet, they’ve clawed past Cal to #2. Texas A&M, buoyed by their star Shaine Casas and an impressive upswing season from senior Tanner Olson, hops up to #4.

Mizzou and Virginia also come charging into the top 10 after being ranked #18 and #17, respectively. Georgia Tech is another big mover, elevating five spots to #17, while Navy and SMU appear at #24 and #25, respectively, after not being ranked previously.

As a reminder, starting with November’s ranks, Arizona State (redshirting their team this season) and the Ivy League (winter sports canceled) are not included in the polls. Out of major conferences, we’ve seen the most action from teams in the SEC and ACC, along with Texas, while Pac-12 and Big Ten teams have been quiet or completely silent, competition-wise.

Voters were instructed to factor in virtual and intrasquad meet results into their ballots, and to downgrade, but not exclude, teams that haven’t competed yet.

How many D1 colleges are competing this year?
California isn’t really allowed to anymore, the northeast is also pretty much shut down.

These types of rankings feel very disingenuous about what the state of affairs is in college swimming.
The 18 and under championships felt the same way. People around the country are having vastly different swimming experiences and rankings and articles on here gloss over that and make everything seem hunky dory.

Sure, you’re right … not everyone on the same level playing field this year. But, really – who cares? These are just rankings … opinions. No one is getting a trophy based on this list.

I don’t care about trophies. I care about the well being of the kids who can’t compete and they look at these rankings and are annoyed and frustrated because sites like this make it seem as if life is back to normal.

Maybe I should be thinking like you… who cares that juniors who can’t swim won’t get recruited like their counterparts in that can swim? Who cares about the seniors who were trying to Make their first NCAA cut or conference meet? Who cares about the freshman who is insecure about their swimming abilities and don’t know if they fit in with their team yet? Who cares right?

Wait, what?? So many articles on this site delve into Covid that it sometimes feels more like “Covid-Covad” than swim-swam. Nothing is “back to normal.” I truly feel for the swimmers on the west coast and northeast who are shut down. Where do you get the idea that we don’t care about the kids missing out? I sure do. We all do. But the answer is NOT to shut down everyone else also or to ignore the good swimming that is happening. Instead, the answer is to educate and advocate to show that ALL states can do competitive swimming in a healthy and responsible manner even during covid. This website celebrates swimming and shows it can be done right now.… Read more »

So how many D1 college programs are up and running this year? What will the NCAA championships look like in March? What will happen if they reduce the number of swimmers allowed at trials? My original point is that there haven’t been an article about these questions. As someone who makes their living in the swimming world, it is frustrating for me to lose my job and have others who are great coaches forced out of the sport and instead of trying to unite and help those people, there is another article talking about what its going to take to qualify for NCAAs this year. It all feels so irrelevant to the bigger picture. I think you are probably right… Read more »

I think DI swimmers know what’s going on. They’re tough and smart and won’t be hurt by an inconsequential poll.

Huh? They are saying that its just rankings. Not saying that we dont care about the swimmers that can not compete. Really? So soft.

I mean this is fun and all, but we all have to continue to recognize how ridiculous these polls are, right?

I think college swim coaches just don’t have the mindset for this kind of a process. Or they’re not getting enough data. I don’t know the answer, but this just doesn’t make sense.

The Virginia coach is not going to have steam coming from his ears. He has learned the difference between a December poll and the points totals at NCAAs. While it is nice to have midseason recognition, I am not aware of anyone who hoists a banner that says, “We are #1 in the December 17 CSCAA Coaches Poll.” If there are such banners, I would love to see a picture!

PS I recognize, fully, that the above post is by a troll (together with his up-voters), but I am engaging him/her in an endearing way. I hope s/he is entertained.

I think it should be illegal for teams to plaster polls and predictions on social media accounts. We should censure them if they become over zealous. UVA is a great example of a hysterical team.

Actually Texas A&M does just that

Pretty sure they’ve been hoisting the banner all year because they were seeded to score the most points.

Sorry for the typos I’m illiterate