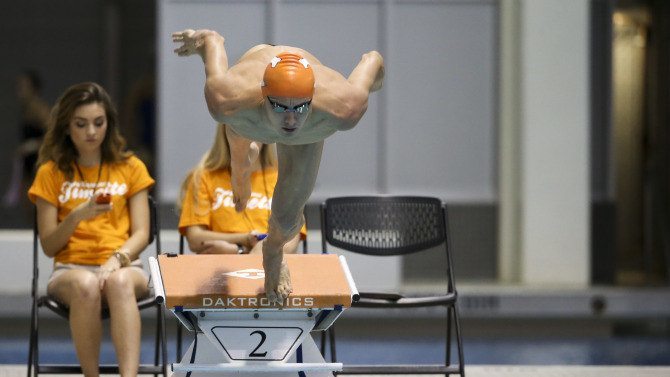 Tennessee continued on their event-winning streak, as Ben Miller got things done in the men’s 1000y freestyle in a time of 9:21.76.  Second place finisher Miguel Davila (Missouri State) clocked a 9:22.81 to give him his second-best time of the season behind the 9:12.97 he clocked at the Louisville Invitational in November.  Davila would also claim runner-up in today’s 500y freestyle, as he touched the wall behind Aggie winner Gonzalo Carazo Barbero. Barbero’s first place 500y free time was 4:32.56 to Davila’s 4:33.13.

Texas A&M put the hammer down in the men’s 200y free, however, as they finished 1-2 with Luke Shaw leading the field in a time of 1:39.18 followed by teammate Hayden Duplechain in 1:40.15.  Missouri State’s Uvis Kalnins rounded out the top three with his time of 1:40.35.  For Shaw’s performance, his time today beat the 1:39.80 he clocked at the Art Adamson Invitational earlier this NCAA season.

Tennessee fired right back with another quick victory in the men’s 100y backstroke, as Sean Lehane touched the wall first in a time of 48.09 (NCAA “B” cut).  As perspective, Lehane clocked a 48.15 around this time last year. In today’s race, Missouri State’s Paul Le touched just .04 behind in 48.13, as both swimmers were the only racers of the field to clear the 50.00 mark.

Englishman Tristan Slater (freshman) of the Volunteers continued the Tennessee point run, earning wins in both the 100y (55.36) and 200y breaststroke (1:59.74) distances.  Both of Slater’s performances cleared the NCAA “B” cuts.

50y freestyle third-place finisher, Jacob Gonzales (Texas A&M) nabbed the win for the Aggies in the men’s 100y freestyle.  Gonzales’ season-best time of 45.15 just touched out that of Tennessee swimmer Jacob Thulin’s 45.29; Thulin himself just beat third-place finisher by .01, as teammate Troy Tillman clocked a 45.30 to round out the top three spots.