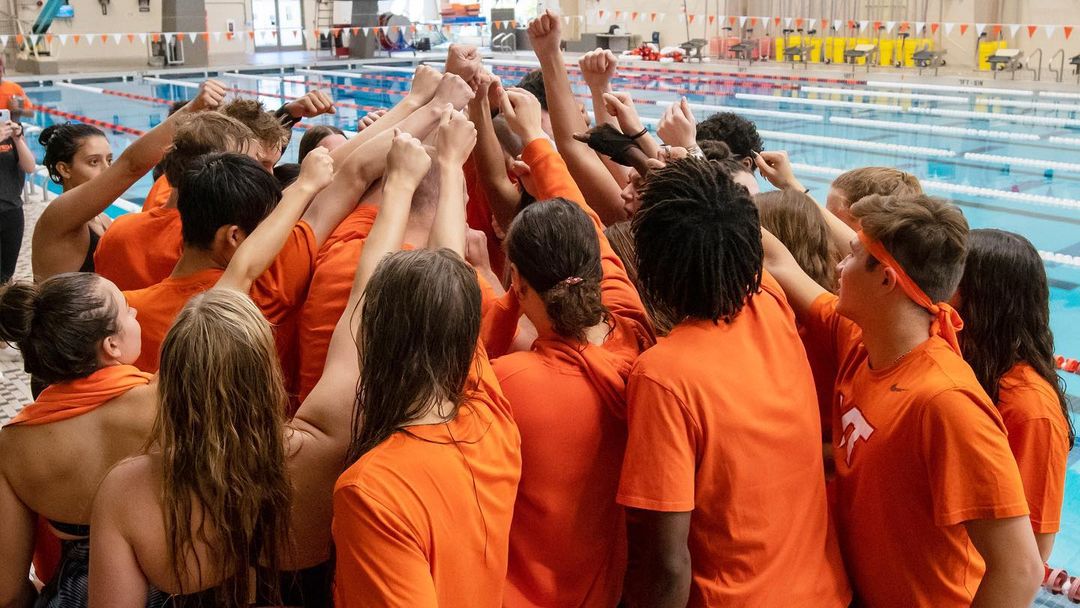 Virginia Tech kicked off the season with the first intrasquad meet of the 2022 Hokie Belt Challenge, a season-long competition designed to build team culture. Current photo via Virginia Tech

The Virginia Tech Hokies kicked off their annual Belt Challenge Friday and Saturday with two intrasquad meets between Team Orange and Team Maroon.

Orange has taken the lead on both the men’s and women’s sides after this first meets, but that was just one component of the Hokie Belt Challenge, a season-long competition designed by staff in 2019 to help build team culture. “What it’s all about is teaching them what it means to be a Hokie,” assistant coach Payton Brooks said in Virginia Tech’s press release. “They get scored on being on time, making sure they’re wearing the right gear, making sure they don’t miss any academic meetings,  and if they’re late to something, they lose points for their team. It’s a way to keep them accountable and teach our culture through a fun atmosphere.”

There will be a series of Orange vs Maroon intrasquad meets throughout the season for the teams to earn more points (although the dates of the other meets have not been made public yet.)  At the end of the season, points will be calculated while factoring in GPA, intrasquad meet results, attendance, physical challenges, discipline, and the Hokie Spirit Award. The winning team will earn their name etched onto a plaque on the Hokie Belt.

Friday’s intrasquad races were contested in long course while the team competed in short course on Saturday. Team Orange’s Fanni Gyurinovics, a freshman, highlighted the women’s side by winning the 100 meter free (56.20), 50 meter breast (32.63), and 50 meter free (25.83). She came within 1.3 seconds of the 100 free time she posted at the 2022 World Championships while representing Hungary. Gyurinovics tied junior Caroline Bentz, also on Team Orange, as the highest point scorer of the meet after Bentz dominated the 100 meter back (1:01.87) and won with nearly a four-second lead over the pack. This was a strong swim for Bentz who came within .72 of her lifetime best time from 2020. Junior Chase Travis defended her distance and freestyle crown by winning the 400 meter free (4:21.16) with a ten-second lead over the field and taking first place in the 200 meter free (2:06.83). These swims were a ways off her best times but displayed the Hokies’ distance strength early in the season.

On the men’s side, the highest point scorer was freshman diver Jacob Fisher who earned 27 points. Senior AJ Pouch claimed first in the 100 meter breast (1:02.78) and 50 breast (29.03) for Orange. He was about two seconds off his fastest 100 breast time, but still had a great race with Icelandic Olympian Anton McKee, an Alabama alumnus. McKee had a slightly faster back half, but Pouch’s starting speed made him untouchable and McKee touched the wall in second place. Junior Youssef Ramadan of Team Orange took second place in the 100 meter fly (54.17) behind sophomore Mario Molla Yanes (53.96) from Team Maroon. Both swimmers didn’t match their best times, but pushed each other similar back-half speeds (29.05 for Yanes and 29.07 for Ramadan.) This was an especially impressive feat from Ramadan who raced the 400 free in a 4:05 and then was back on the blocks for the 100 fly less than 15 minutes later. Sophomore Luis Dominguez tied his Orange teammates Pouch and Ramadan for the second-highest point scorer of the meet after he won the 400 free (3:58.86) and 200 free (1:52.41). He came within about six seconds of the 400 free time and within about four seconds of the 200 free time he swam at the 2022 European Championships while representing Portugal.

The Hokies also welcomed back alumni Antani Ivanov, who placed 2nd in the 400 free behind Dominguez, and Ian Ho who won the 50 free. Notably, Team Maroon was missing two key members due to sickness: Carles Coll and Emma Atkinson.

“Overall we had a very good Hokie Belt Challenge,” Lopez-Miro told SwimSwam. “These first four weeks have been very intense with conditioning with dry-land and weights plus the water training. Very exciting first month.”

Next up for the Hokies is their dual meet against George Washington and the University of Ohio on October 1st at home. “I can’t wait to see the team together fighting as a team,” Lopez-Miro said.