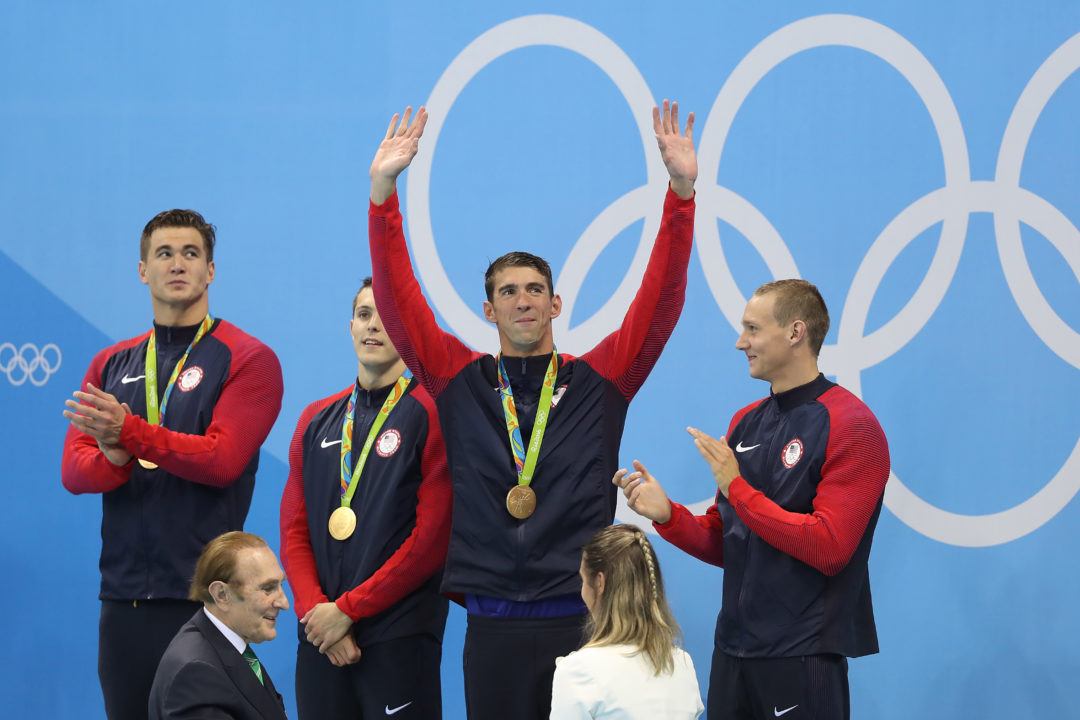 Even the most casual swim fans know that Michael Phelps is all-time Olympic medal leader, but here's the other men who have led the swimming medal count. Current photo via Simone Castrovillari

With just about two weeks remaining until the Tokyo Games get underway, we continue to take a look at some of the big moments and stats in Olympic swimming history. Our friends at SwimmingStats released an Instagram infographic detailing the historical progression of men’s all-time Olympic swimming medal leaders, which you can watch below.

Early on Hungary’s Zoltan Hamay and the USA’s Charlie Daniels dominated the swimming early in the modern Games. Hamay won five across 1900 and 1904, while Daniels won five in 1904 alone, then each added another pair of medals in 1908. While there were many great swimmers in the intervening years, no one would earn more than five medals for decades to come. Finally, Australian distance specialist Murray Rose broke through with five medals across the 1960 and 1964 Olympics, followed by the USA’s Don Schollander matching that total after the 1964 and 1968 games.

So, let’s pause for a second to put this into perspective. Prior to 1972, no male swimmer had won more than seven medals over the course of an Olympic career, and that record had stood since 1968. Only two more had earned six medals.

Enter one Mark Spitz. The Indiana Hoosier picked up four medals in 1968, but even that only provided a hint of what was to come. In Munich, Spitz swept the 100/200 free, the 100/200 fly, and all three relays, to win seven golds in a single Olympics. Clearly that moved him to #1 all-time on the men’s medal list. Meanwhile, Germany’s Roland Matthes brought his tally up to seven total medals in 1972 as well, then earning an 8th in 1980.

Matt Biondi would catch, and then pass, Matthes, and then eventually tie Spitz with his 11th medal at the 1992 Games. Another American, Gary Hall Jr., would eventually become the third man to earn double digit medals. It’s probably worth noting at this point that historically, the US men’s medal tallies have been helped incredibly by the US’s relay dominance. Six of Biondi’s 11 medals, and five of Hall’s 10, were earned via relays.

During the 90s, Russian sprint specialist Alexander Popov began racking up the medals, collecting a total of nine through the 2000 Olympics. That same year, Australian distance legend Ian Thorpe earned five medals, then he’d garner another four in 2004 to tie Popov’s nine medals. Those two men are tied for the highest medal counts by a male swimmer outside of the USA.

The 2000 Olympics also marked the debut of the GOAT, although he didn’t win any medals that year. Instead, Michael Phelps would have to wait for Athens to Spitz’s single games medal record with eight (all but two gold), but he surpassed Spitz in 2008 with a legendary eight gold medals in Beijing, moving him to #1 all-time.

American Ryan Lochte swam at a total of four Games, passing Spitz and Biondi in 2016 with his 12th medal, while Phelps would ultimately grow his medal count to 28, more than twice than the total of Lochte, who now ranks #2 all-time.

As we head to Tokyo, here’s where the all-time medal count stands:

Who is the oldest person to ever medal? Who the youngest?

For me that already at Athens 2004 (at 19) he won four individual golds and a bronze in the so-called “race of the century”, the 200 free final vs Thorpe and VDH who had PBs in the 200 free way faster than him. But Phelps, northeless the amount of races and other easier choices (in the 200 back he would have been the second-favorite after Peirsol) accepted the nearly impossible challenge. And then, four years later, he won 5 individual races, with many (also in my nation) who thought that such an exceptional feat was.. boring, considering Phelps’ superiority in nearly every race (except the 100 fly). What stands out in Phelps history, for me, is that only the numbers… Read more »

If they removed relays Dressel would have no Olympuc medals ?

Good knowledge! Obvious reference to the 2004 US Olympic trials where Phelps qualified for the team in 6 events (including the 200 back which he dropped).

Sure does!!!! When you look at stats like this & talking about the best of the best & then there is Phelps.

Some of those relay medals in the tally are from heat swims as well, so the person is being credited for a race they didn’t even swim in.