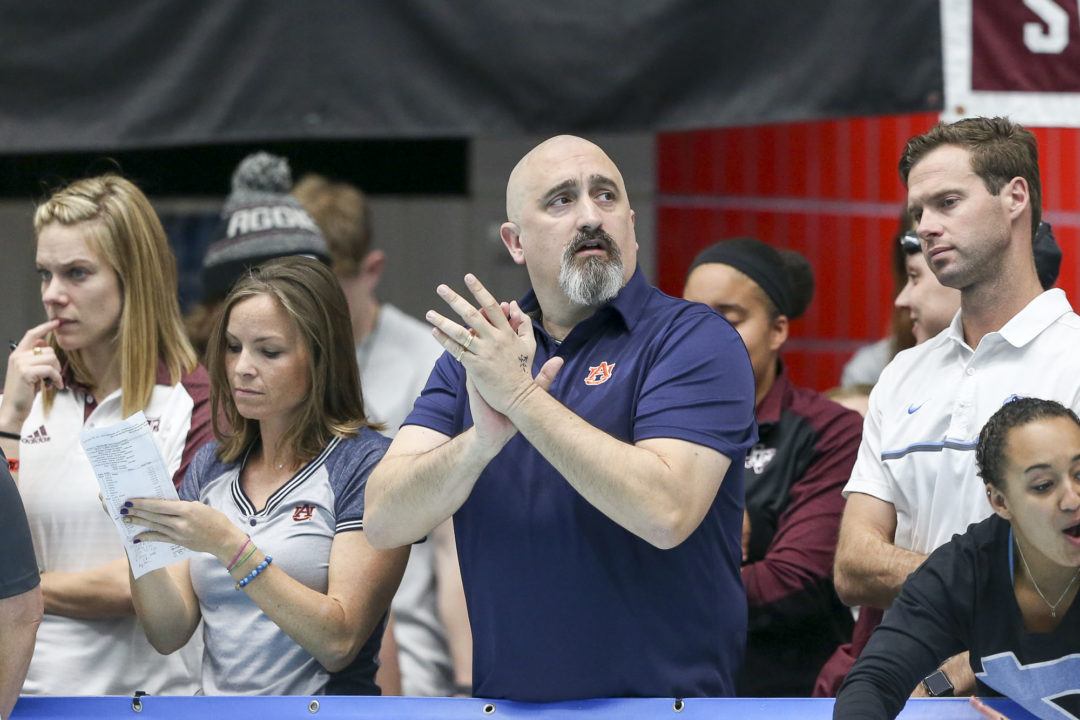 Nearly 60% of voters predicted that current assistant Sergio Lopez would be the next head coach at Auburn University. Archive photo via Tim Binning/TheSwimPictures.com

Our most recent poll asked SwimSwam readers to predict the next head coach at Auburn University:

Question: Who do you think will be the next head coach at Auburn?

Nearly 60% of voters predicted that current assistant Sergio Lopez would be the next head coach at Auburn University.

Lopez is currently the associate head coach at Auburn, and is rumored to be among the top candidates. Lopez has previous collegiate head coaching experience at West Virginia, and made a big impact coaching high school and club at the Bolles School, producing a number of standouts including Ryan Murphy, Joseph Schooling and Santo Condorelli. (Caeleb Dressel is a bit of a gray area, as he swam for a different high school and did at least a good portion of his club swimming at Bolles with Jason Calanog, though Lopez was certainly involved in some capacity).

The only mark against Lopez as a candidate would be if Auburn wants a completely fresh start from the previous coaching staff after Brett Hawke‘s resignation.

Voters weren’t too confident about any of the other big-name candidates, which makes sense – all of them would have to leave relatively good situations head coaching at other schools. David Marsh was the head coach at Auburn during the school’s run of dominance in the 2000s, but he just took over at the University of California – San Diego last year and may not be interested in leaving so quickly. Dave Durden was a former Auburn assistant with Marsh, but has the California men built into a perennial NCAA title contender. Braden Holloway has built NC State into another of the NCAA’s elite, and his only ostensible reason for jumping to Auburn would be a pretty substantial raise.

Voters selected the “other” option more than any of those coaches. You can read a more full breakdown of the top candidates for the Auburn job here.

NCAA discussion tends to be very important to SwimSwam readers, so it’s no surprise that this poll netted more than 1200 voters in a week, well above what many of our polls draw.

Below, vote in our new A3 Performance Poll, which asks voters which super-suited world record will last the longest:

Is there any good guess on when this might be announced?

Brutus – Is there a plan B they’re ready to act on?

Did the job even open publicly?

Observer – they used an executive recruiting firm, so there wouldn’t have been a public posting.

Is that how head coach searches are usually conducted?

At most schools, it must be posted for at least 30 days