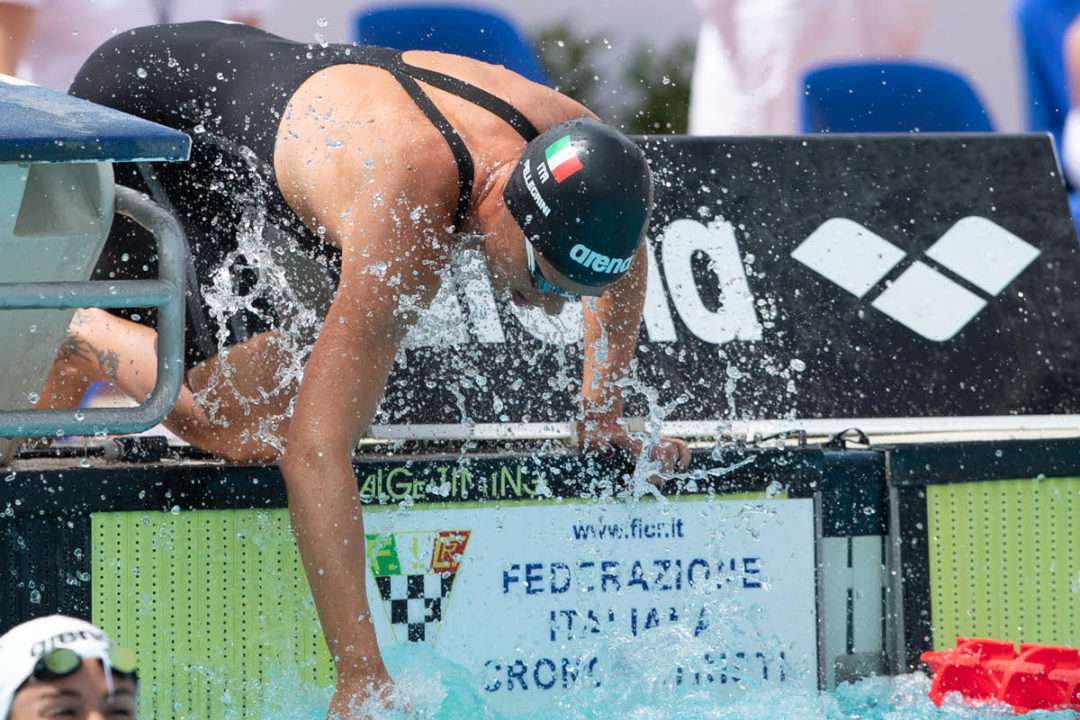 About half of voters picked the women's 200 free as the next world record to fall from our list, which also included the IMs and the ridiculous 200 fly. Archive photo via “Rafael/Domeyko Photography”

Shouts From The Stands: Collegiate Sports As A Social Equalizer

While participation in college sports gives a career boost to almost all athletes, it has been a game-changer for women and minorities.

Our most recent poll asked SwimSwam readers to pick the first women’s world record to fall from our list of relatively long-standing records:

Question: Which of these world records will fall first:

With just two 2009 world records remaining on the women’s side (in long course at least), we had to broaden our poll a bit from the men’s side. We included both super-suited records (200 free and 200 fly), but also both IM records, which have stood untouched for some time now.

Almost half of voters picked the 200 free as the next to fall. That record (1:52.98 from Federica Pellegrini in 2009) has been rarely approached, although the wide field of 200 free talent around the world is a good reason to be bullish that someone can soon get closer than anyone has gotten in the past decade.

After Pellegrini set the record in 2009, Allison Schmitt came within seven-tenths of a second in 2012, without the aid of full-body suits. But in the eight years since, no one has bettered Schmitt’s textile best. In fact, Katie Ledecky‘s 1:53.73 at the 2016 Olympics is still the second-best textile swim of all-time, and in 2019, no one in the world broke 1:54.0.

Ledecky is still around, and went 1:54.5 at a relatively low-key in-season meet this March. China’s Yang Junxuan is rising with an in-season 1:54.9 of her own. Australia’s Ariarne Titmus was 1:54.2 last year, and there are still vets like Emma McKeon and Sarah Sjostrom in the mix.

About 24% picked the women’s 200 IM to fall. World record-holder Katinka Hosszu is still active, which should leave this record a chance to fall. But Hosszu hasn’t bested her 2:06.12 since 2015, and was just 2:07.0 last summer. Meanwhile only one other swimmer in history has broken 2:07 in textile: Great Britain’s Siobhan-Marie O’Connor.

Hosszu’s 4:26.36 in the 400 IM seems even tougher to match. Hosszu hasn’t been better than 4:29.3 since setting that record at the 2016 Olympics. And no other active swimmer has even been under 4:30, with the exception of Ye Shiwen, who blasted a 4:28.43 as a teenager, but has never come close to hitting that time in the years since.

The 200 fly had to be included in this poll just to see how many extreme optimists are out there. Turns out, it’s 5.1% of our voting population. Liu Zige went 2:01.81 in a super-suit. Since than, no one in the world has even been under 2:04. It’s arguably the most insane super-suited world record, and still appears to be the least likely to fall in the near future. Last season, the world’s best time was a 2:05.9 from Hali Flickinger, and she was the only one under 2:06. And no one has broken 2:05 since the 2016 Olympics.

Below, vote in our new A3 Performance Poll, which asks voters whether they feel their local area can safely reopen swimming pools after the coronavirus?

Confession time: I was one of the people who voted for the 200 fly…because I misread the poll and thought it was asking about the record LEAST likely to fall in the near future. That record is NOT dropping any time soon.

The field seems to be getting further away from this record rather than closer.

it’s kinda like the men’s 200 free in that way. the records are aging very well

The 200 free WR looks safer now than it did right after Rio when it was conceivable that Ledecky, Sjoestroem or Oleksiak all could have made a run at it at, or before, Tokyo.

As it stands, I voted 200 IM because I feel like the Iron Lady has a better chance of taking that down than anyone does at the 200 free in the next few years.