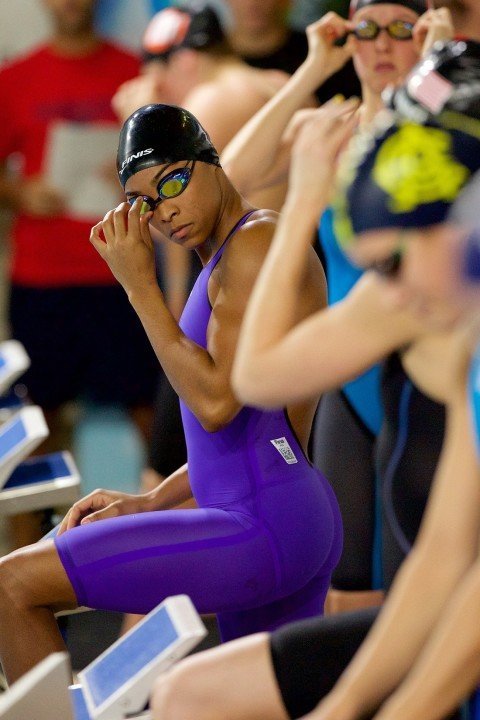 Arianna Vanderpool-Wallace swam one of the 10 fastest 50 yard freestyles in history in prelims on Saturday. Archive photo via Rafael Domeyko/Domeyko Photography

The pros from SwimMAC Carolina dominated most of the open/senior events on Saturday evening at the 2016 Southern Premier meet in Nashville, Tennessee. Prelims of this meet are being held in short course yards, while finals reverts to long course meters.

That includes Ryan Lochte, who swam just the 200 fly in finals after scratching the 200 IM.

Brown’s previous best time in the event, done last summer, was 2:04.71, and his new best time is easily the fastest done by a 15-year old American this season. In fact, despite being on the younger end of hte age group, he now ranks in the top 30 in American history in the 200 fly among 15-16s.

Another Marlins of Raleigh 15-year old, Madison Homovich, won the girls’ 200 meter fly, swimming a 2:15.88 for top honors in a race without pros or collegians.

As mentioned, Lochte swam the 200 yard IM in prelims to a top qualifier of 1:42.42, but in finals he ceded to his SwimMAC teammate Matthew Josa (as did many of the top morning qualifiers in the race). Josa wound up winning that race going-away in 2:03.26, ahead of Macedonian Olympian Marko Blazevski (2:04.73).

The women’s 200 IM went to the hands of breaststroke Katie Meili in 2:15.71. She was trailed a second back by Nashville Aquatic Club 14-year old Alex Walsh, who swam 2:16.72. She was as good as Meili in every part of the IM, aside from Meili’s specialty the breaststroke which made a 3-and-a-half second gap over 50 meters alone.

Walsh in her runner-up finish jumped to 9th place of all-time among American 13-14s in the 200 IM.

In the women’s 50 free, Bahamian and 2012 Olympic finalist Arianna Vanderpool-Wallace put in a 24.80 for the victory, beating out SwimAtlanta’s Amanda Weir (25.51).

That’s Vanderpool-Wallace’s best time of the season in long course, and in prelims, overshadowed by the explosive American Record from Abbey Weitzeil in Austin, she swam 21.37 in yards – one of the 10-fastest swims in history.