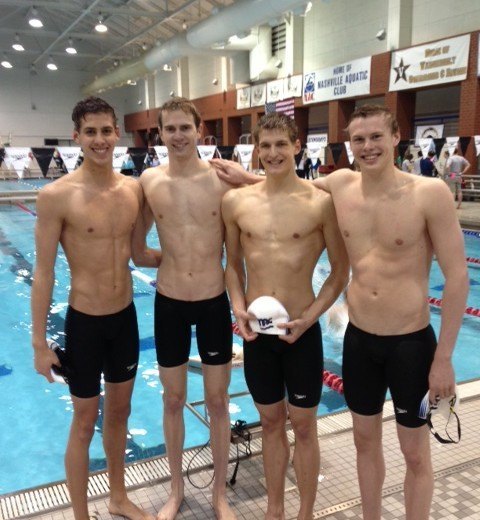 In NOVA’s championship meet, which capped off their three-part senior racing series, 14-year-old Teagan O’Dell showed her dominance in the sprint events.

A foursome from SwimMAC Carolina has broke a National Age Group Record at the Nasvhille, Tennessee Speedo Championship Series meet.

The old record actually belonged to SwimMAC as well; the 17-18 mark was a 2:57.69 by this same group last year, the broader 15-18 record was by a 2011 relay where Manchester and Darmody were joined by Peter Brumm and Logan Heck.

The meet was capped by this record-breaking relay, but there was plenty of buzz in earlier events. The meet got its first attention when Olympian Claire Donahue swam a 52.74 in her return from surgery earlier in the year (read more about the surgery here). There’s not much perspective to give to that time, and the exact time doesn’t matter much, but what’s important is that she had a healthy, and strong, swim just six weeks after a fairly major operation. That’s good to see for America’s mid-major Olympian.

In the men’s 100 fly, Matthew Josa won in 46.92. That’s his first time under the 47-second barrier, and is already fast enough that he would have won the Division II NCAA Championships this year (Josa is committed to swim for DII Queens University next year).

The women’s 100 back with Kathleen Baker is to watch.