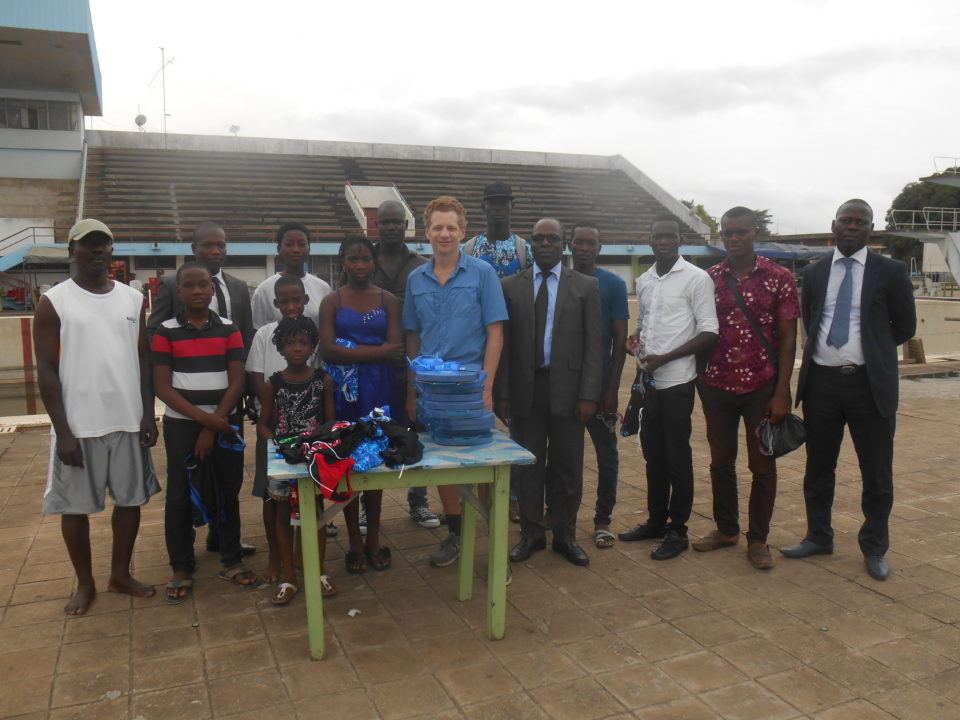 As an English teacher for a year in the small West African country of Benin, native Californian Dan Airth was saved by the fact he was within a quick motorcycle ride to the nearest pool.

As an English teacher for a year in the small West African country of Benin, native Californian Dan Airth was saved by the fact he was within a quick motorcycle ride to the nearest pool. He remembers when he first walked into the swim facility called Stad de l’Amitie (Friendship Stadium). “I was astonished. Someone was really serious about swimming to build such a huge swim facility in Benin.” 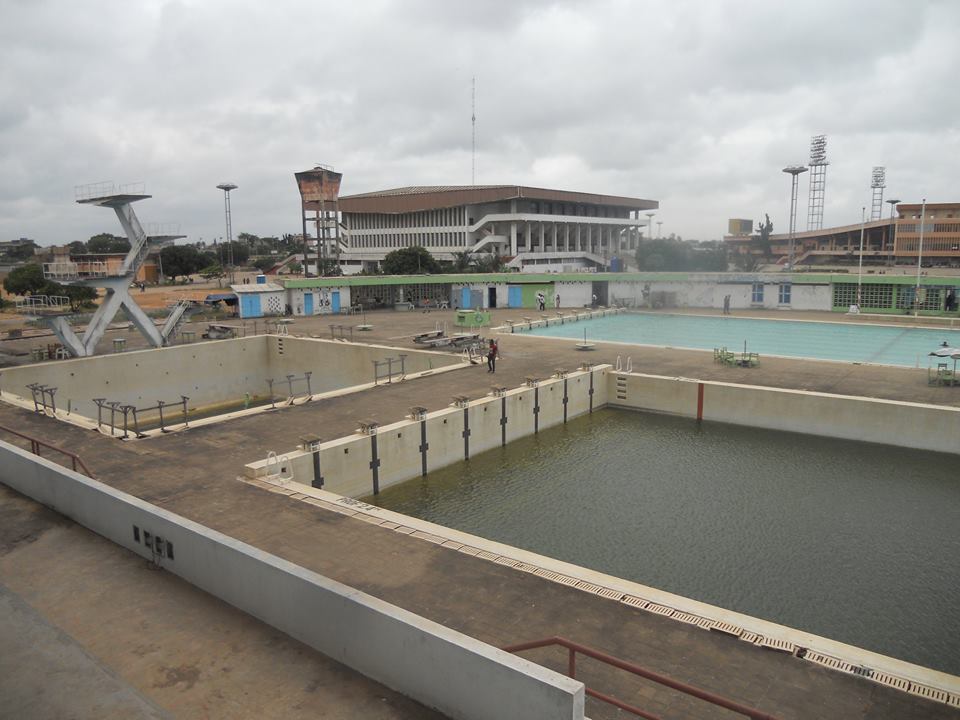 The swim facility at the Friendship Stadium was built by the Chinese in 1982.

The stadium and sports complex is the center of recreation in Benin and people go there to rollerblade, choreograph dance, hold impromptu concerts or just socialize. The swim facility is off to the side and along with the 10,000 seat soccer stadium was financed and built by the Chinese in 1982. The swim facility is comprised of two 50 meter lap pools and a diving pool with a 10 meter board.

The president of the Beninese Swim Federation, Damien Alognisso, remembers the heyday of the Stad but that was a long time ago. Regular swim meets were held there and the grandstands surrounding the pool would be full. Nowadays, the facility is hardly funded and like so many other public projects in Benin is slowly becoming forgotten. Unmaintained training rooms, classrooms, and a café are dilapidated and unkept. 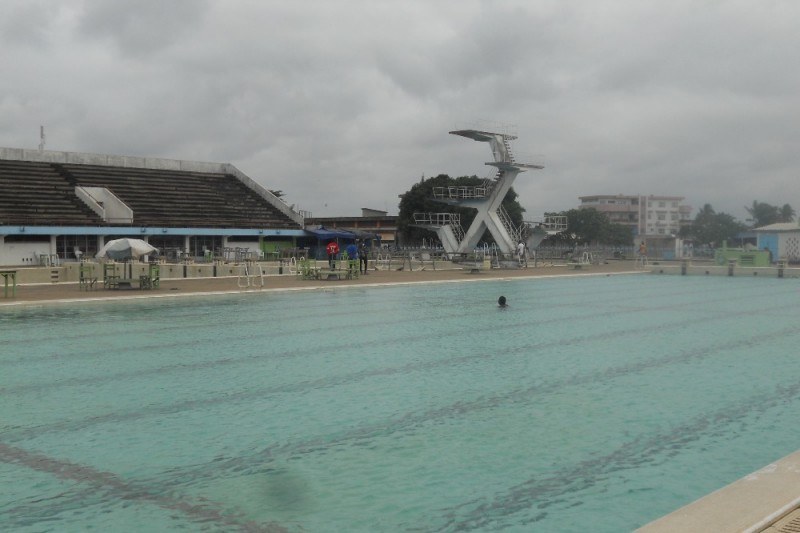 The swim facility at the Friendship Stadium was built by the Chinese in 1982.

However, the Federation’s swim club still meets there every day. It is held together by the dedication and perseverance of  Narcisse Alognisso, the brother of the Federation’s president and the club’s swim coach. Narcisse is a constant presence at the pool; walking the decks and leading his swimmers through drills. One of his swimmers, Jules Bessan, participated in the 50-meter freestyle in last year’s Olympics at Rio. He has also trained past Beninese Olympic swimmers Desire Awoussou, Charmelle Sobgadji and Rayane Alognisso.

Narcisse has accomplished this by recruiting the best swimmers from all over the country. He not only serves as their coach and mentor, but also taken some of the young recruits into his own home. The hardest part of recruiting the young swimmers is to convince the swimmer’s parents about the importance of swimming.

Dan Airth met the Alognisso brothers in April 2015 when he donated 60 swimsuits and goggles to the Federation. Dan sees it as a payback for the times he swam there. “I never thought I would find a pool like this in Benin so I just wanted to help out. Damien told me that this was the first time that anyone from the West has donated anything to the Beninese Swim Federation.”

Dan also founded Swim Benin when he returned to California in 2015. The pending non-profit’s mission is to promote swimming and water safety in the West African country. The idea is to give the instructors the training and tools they then can use to establish their own swim instruction businesses. Starfish Aquatic Institute has been helpful in supplying Dan the curriculum and an advice on how to conduct a swim event in Africa. “I went to a Starfish leadership conference and they really inspired me to take the next step and establish a non-profit”, Dan says. 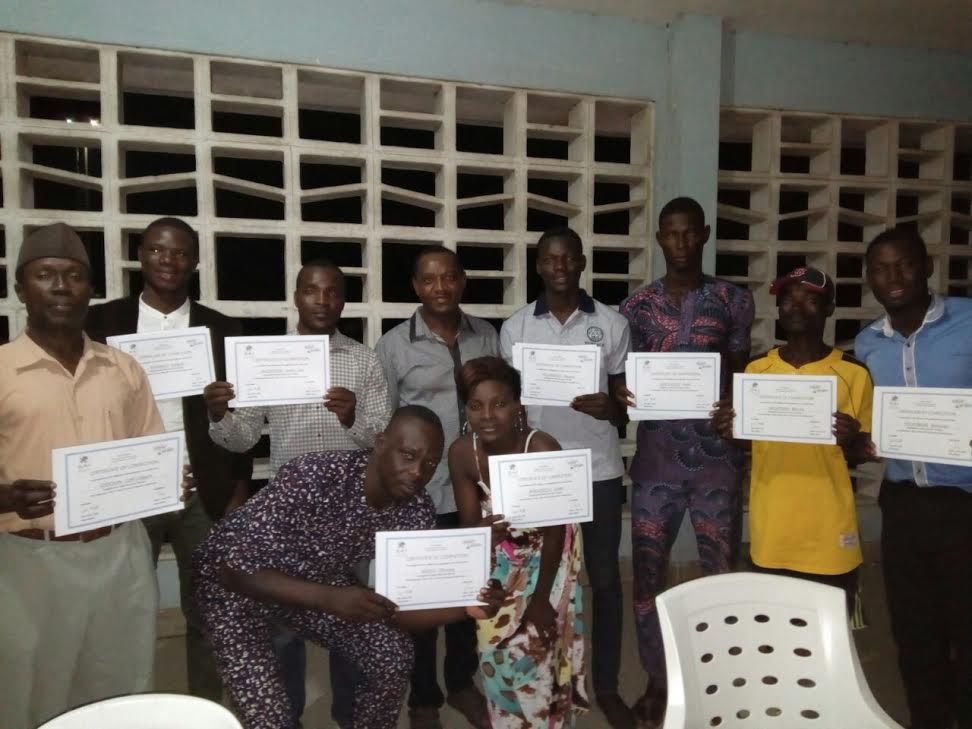 You can donate to Swim Benin by visiting Dan’s website at [email protected] or directly to the gofundme campaign Help Benin Swim.