SVK: Four Changes in the List of Slovak Records Within a Weekend 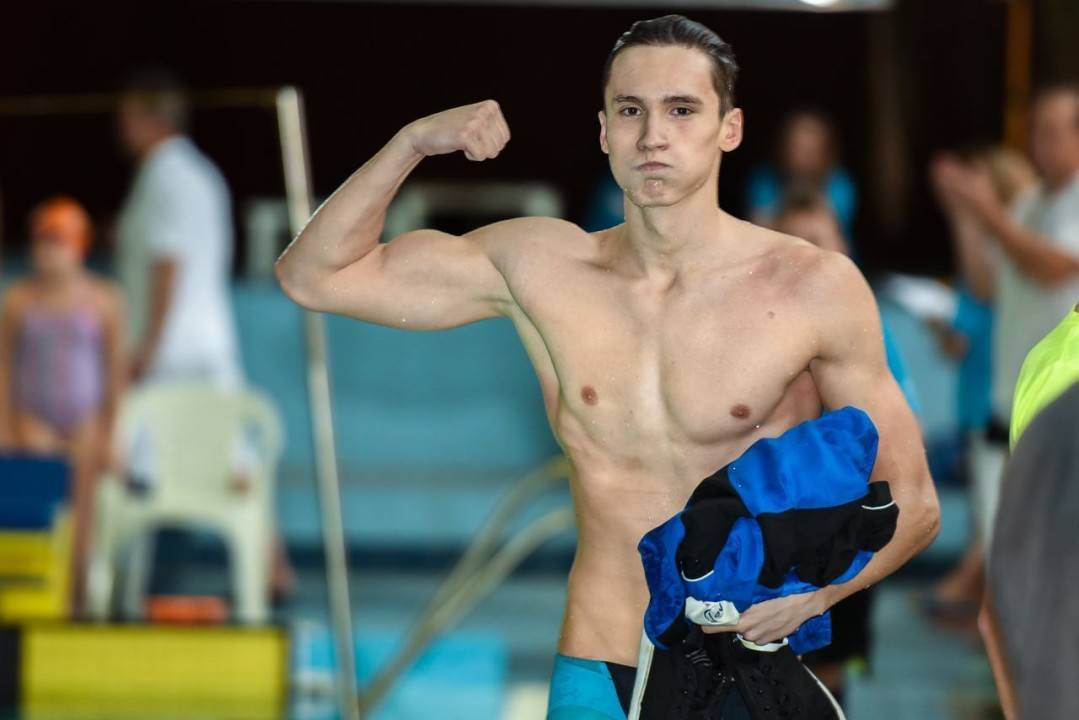 At the end of 2014 Slovak swimmer Vladimir Stefanik gave a Christmas present to his fans and to himself. At Slovak Championships in... Archive photo via Peter Sukenik/www.petersukenik.com

At the end of 2014 Slovak swimmer Vladimir Stefanik gave a Christmas present to his fans and to himself. At Slovak Championships in Dolny Kubin he, back then as 16-year-old, won a total of four titles of Slovak Champion in short course pool. Two were junior titles  in the 50m and 100m butterflies. Another title was absolute – accompanied by vigorous cheering from the spectators he managed to swim the 100m freestyle in time of 49.59, by which he won in junior and senior category simultaneously. By this time he cut the junior record that had stood until that time and he was 13 hundredths from breaking the senior record.

It didn’t even take a whole year for Stefanik to repeat this success. During the Autumn Championships of the Central Slovak region he broke his old junior record in this race and by the time of 49.42 he also set up new senior record on 21st of November. The previous one, 4 hundredths behind, had been held by Roman Kucik from club VSC Dukla Banska Bystrica from 2010.

17-year-old Stefanik is a swimmer from club KPS Nereus Zilina in which he’s been training since 2007 under the coach Juraj Skopal (with Vladimir in the picture below). Since January 2013 he is representing Slovakia in junior category.

He considers his greatest success participating in semi-final of 100m butterfly at the first European Games in Baku. In all, in that race he ended up in 12th place with a new junior Slovak record in the time of 54.59.

He achieved great results at the FINA World Junior Swimming Championships 2015 in Singapore. The biggest achievement was breaking the 33-year-old record (!) of legendary swimmer Marcel Gery, born in Slovakia, in the 100m freestyle. Stefanik set the record in time of 51.03, the previous record was 51.55. Marcel Gery, among other things, is an Olympic swimmer from Barcelona in 1992, and he became the Champion of Canada twenty times and in the state of Ontario you can find his name in the Hall of Fame. Until now he is a holder of some of the Slovak records.

During the last weekend of November three other records were broken in breaststroke races. Andrea Podmanikova managed to swim all of them at the Grand Prix Brno in the Czech Republic. At first, she improved her own record on 50m, which she had swum on the same Slovak Championships as Vladimir in December 2014. Andrea cut the old time by 19 hundredths to the time of 31.18. Next, she beat her barely two-week-old record on 200m, which we mentioned here. This time she bettered it significantly, from 2:26.13 to 2:24.42. And as they say, the third time’s the charm, from Sunday, 22nd of November, she is also a record-holder on 100m breaststroke in short course pool. She improved her one-year-old record by 52 hundredths to the time of 1:07.34.