Sutton, Butler, and Hashbarger All Verbally Commit to Texas 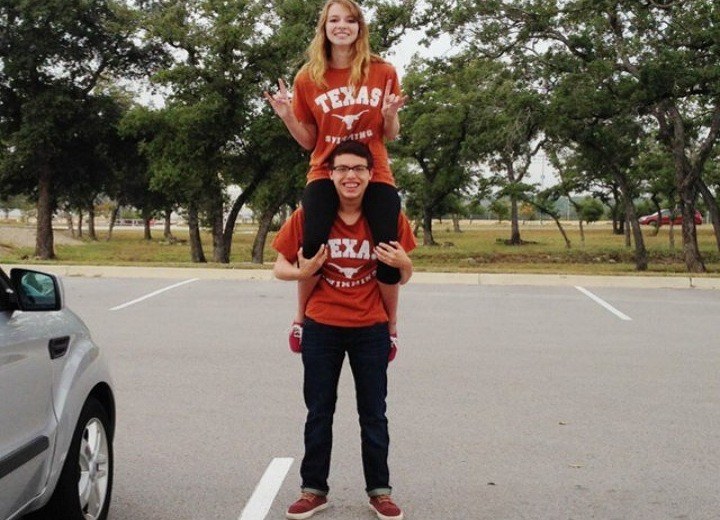 Sam Sutton poses above with a friend on her shoulders for 'twin day' after verbally committing to Texas. Current photo via Sam Sutton

After Joseph Schooling publicly committed to Texas on Wednesday morning, he called on his club teammate Caeleb Dressel to do the same via Twitter.

Dressel, however, remains silent on his decision, but that hasn’t slowed down the sudden roll that Texas recruiting is on.

The men have added a pledge from Jared Butler, while the women have added verbal commitments from Sammie Hashbarger and Sam Sutton.

Butler, who trains at the Rockwall Center of Excellence, is primarily a backstroker. His yards bests are 52.09 and 1:50.49, respectively.

He joins a class that includes Schooling, Jonathan Roberts, and Brett Ringgold: three swimmers from the Dallas-Fort Worth Metroplex, plus Schooling from Florida, as Texas continues to pound the in-state recruiting trails.

Women’s head coach Carol Capitani is also hitting that area hard, including the commitment from the freestyler Hashbarger.

That 200 free, off-the-bat, appears to be the money race for Hashbarger. Capitani, in her first year as the head coach at Texas after being an associate head coach at Georgia, brought over the 200 free specialty that Georgia does better than anyone in the country. Texas had two swimmers under 1:45, a third at a 1:45.8, and a fourth at 1:46.3 in the 2012-2013 season. The year prior, though they got a great swim from All-American Karlee Bispo, didn’t have anywhere close to that kind of depth in the event.

Sutton, meanwhile, is also a sprinter, and a local one at that. She trains with Austin’s Nitro Swimming, and is also a freestyler. Sutton is more of a pure sprinter, with yards bests of 23.51 and 52.00 in the 50 and 100 yard freestyles.

She ended up sitting out of high school swimming as a junior to focus on club swimming, and at NCSA’s broke the Nitro team record for 15-16’s.

Why isn’t sarah denninghoff on the roster/ swimming? I thought she had one more year of eligibility? She had such a great summer too

Denninghoff is on the roster. Couldn’t tell you why she hasn’t swum, but I will ask.

Her and Ellen Lobb have had some knee problems which they are trying to quickly recover from.

Congrats Sam!! We are so incredibly happy for you!! Hook ’em!