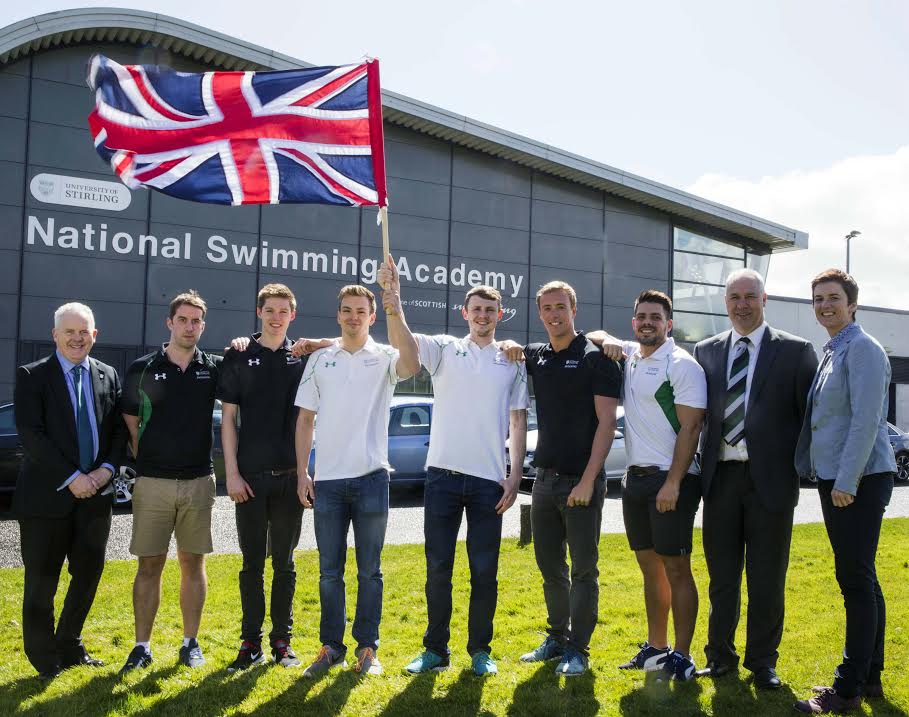 Students and staff bid farewell to members of the University of Stirling’s sensational swim squad as they jetted off to the unforgettable backdrop of Rio, to fly the flag for Team GB at the 2016 Olympic Games.

Swapping the National Swimming Academy at Scotland’s University for Sporting Excellence for the British Swimming holding camp north of Rio, Ross Murdoch, Robbie Renwick, Craig Benson and Duncan Scott are ready to take on one of the biggest challenges of their swimming careers.

For first-time Olympian and Commonwealth gold medallist Ross Murdoch, Rio will be the ultimate test. 19-year-old team-mate and freestyle specialist Duncan Scott will also experience this level of competition for the very first time.

Breaststroke swimmer Craig Benson, who studies accountancy and finance, will look to improve on his fantastic performance at London 2012, while full-time athlete Robbie Renwick hopes to make it third time lucky on the Olympic stage, having competed in both London and Beijing.

The University’s sporting stars are among 26 swimmers selected to travel to represent Britain in the Olympic pool.

The swimmers are joined by two former tennis scholars – Colin Fleming and Gordon Reid – and past golf scholar and Stirling graduate Catriona Matthew.

Cathy Gallagher, Director of Sport at the University, said: “The excitement is palpable now with less than one month until the 2016 Olympic Games. Although the pool on campus will be missing our four swimming Olympians, we hope they take a bit of Stirling magic with them to Rio.

“The work and dedication put in by our athletes and coaches, as well as Scottish Swimming and sportscotland Institute of Sport, to get to this point has been immense and we wish them every success for the competition.

“The entire University community is incredibly proud of what these young athletes have already achieved and will be backing them every step of the way. We also send our good luck and best wishes to former golf and tennis scholars who will compete in Brazil with Team GB.”

The Olympic swimming competition gets under way on 6 August at the Olympic Aquatics Stadium in the heart of Rio. The tennis event will be played on hard court, with the draw taking place on 4 August, while the women’s golf tees off on 17 August.

As Scotland’s University for Sporting Excellence, Stirling currently supports 88 scholar-athletes, enabling students to balance training and competition at the highest level with study for a University degree.