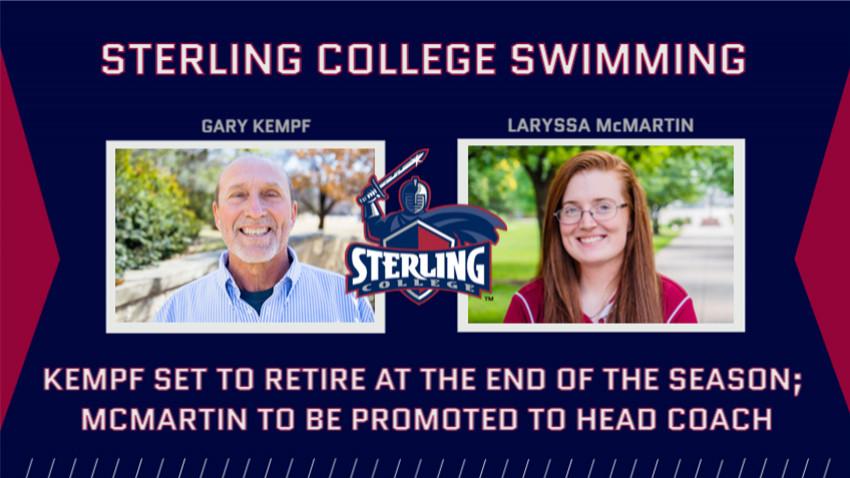 “One of the proudest things that Dorothy and I feel, is that we have followed where God has called us,” said Kempf. “When we left KU, we felt called to Asbury. When we left Asbury, we felt we were called to Sterling. We have been very blessed to be part of Sterling College.”

Prior to Sterling, Kempf spent 24 years as head coach of Kansas University’s women’s swimming team and 18 seasons as head coach of men’s swimming. A six-time conference coach of the year and the 1983 NCAA Swimming Coach of the Year, Kempf was recognized for his outstanding service to the swimming program and Kansas University when he was inducted into the Kansas Athletics Hall of Fame in 1998.

Continuing his coaching career, Kempf moved to Asbury University where he served as athletic director and assistant swimming coach. His wife, Dorothy, served as the swimming and diving coach from 2006-11 and was named the NAIA Women’s Swimming Coach of the Year in 2008. She coached three NAIA national champions in her time at Asbury. The Kempfs were both recognized for their contribution to Asbury in 2011 through induction into the AU Athletics Hall of Fame.

Under Kempf’s leadership as athletic director, the Sterling College Warriors had a number of improvements and accomplishments. The College won 12 KCAC titles and had eight postseason appearances in national tournaments. The Warriors had 25 athletes named NAIA All-Americans and numerous All-KCAC winners, Champions of Character recipients, coaches of the year, and NAIA-Daktronics Scholar-Athletes. Kempf also had an integral role in working on renovating athletic facilities on campus, including Smisor Stadium and the Gleason Physical Education Center.

“Being part of these transitions for our athletics programs and seeing what this has turned into over the past five years has been incredible,” said Kempf. “It has been a great tenure as Athletic Director and as Head Swim Coach and we are extremely thankful for the opportunity Sterling has given us.”

The Sterling College Swimming program saw immediate success in its inaugural season, as five Warriors earned All-KCAC honors and four Warriors qualified for the 40th Annual NAIA Swimming National Championships in Knoxville, Tennessee. The program also had one Honorable Mention All-American and set a number of new records on the season. Adjustments were made for Sterling’s second season due to COVID-19, but the Warriors have continued to work hard and improve, competing in three meets this fall and looking to keep their success moving forward into the spring.

“We feel like we are being called in a different direction and we are ready for the next chapter,” said Kempf. “We are unbelievably blessed to be part of this year’s team. This team is full of wonderful people and it has the right foundation to be a very successful swimming program.”

Associate Head Coach Laryssa McMartin will now step into the role of Head Coach of the Sterling College Swimming program following the end of this season. McMartin made her way to Sterling College from Cheyenne, Wyoming in July 2020. After attending Grace University, McMartin was an assistant swim coach for the College of St. Mary in Omaha, Nebraska for two years before becoming an assistant swim coach for the University of the Cumberland in Williamsburg, Kentucky. While at the University of the Cumberlands, McMartin helped lead the Patriots in winning the Mid-South Conference championships and placing third at the NAIA National Championships in women’s swimming & diving and seventh in men’s swimming & diving.

“I am so beyond grateful and blessed to be a part of the Sterling family,” said McMartin. “Coach Kempf has started something great here and I am very thankful for all he has taught me this past year. As unconventional as this past season has been, it has been a lot of fun both in and out of the pool. We definitely have something special here with this team and I am excited to continue to grow and develop this program. Go, Warriors!”

“We are very thankful for everything Coach Kempf has given to not only the swim program but to the overall athletic department during his tenure,” said Athletic Director Justin Morris and Vice President for Athletics Scott Downing. “We celebrate with him a very successful career in athletics and wish him nothing but the best in his retirement. We also are very excited about the future of Sterling Swim under the direction of Coach McMartin.”

The Sterling College Swim team will resume their season later this spring.

Be sure to check for news and updates on Sterling Warrior Athletics on Facebook (/SCWarriors), Twitter (@SterlingCSports), and Instagram (sterlingcsports), as well as the hashtag #swordsup. Watch all of the Warriors’ live home events on the Sterling College Sports Network.

Well earned retirement after pouring so much into the sport and the lives of his athletes. Gary and Dorothy are great coaches and will always have a special place in my heart.