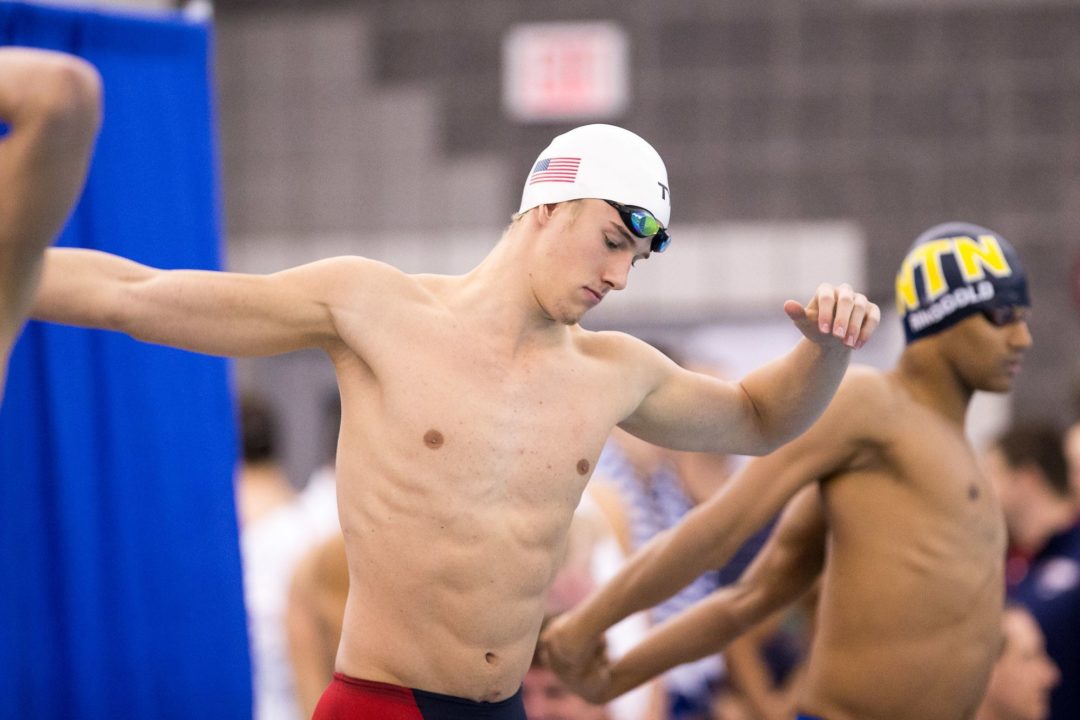 Paul Powers is one of multiple record-breaking swimmers already in Georgia, and they're through just one of four sessions so far. Archive photo via Tim Binning/TheSwimPictures.com

We’re only through the state’s smaller schools, but multiple Georgia High School state records have already gone down at the Georgia Tech Aquatics Center on Friday. Note that Georgia’s swim coaches association only keeps one list of State Records, not one for each meet.

The first, which we reported on earlier, was from Woodward Academy’s Caitlin Cooper, who clipped the 50 free record of Amanada Weir (22.91) early in this meet. She also took the top seed, though not the record, in the 100 free with a 50.34 – still more than a second away from Wier’s record.

After that, the flood-gates opened up a little bit. Paul Powers, who is committed to Michigan and is the #2 swimmer in this year’s senior class, passed on his best event the 50 free individually at this meet. The top seed in that race went instead to his younger brother and North Hall teammate Ty Powers in 20.51.

Paul’s first individual swim came in the 100 free, where he was easily the top seed in 43.66. That improved his own record of 44.02, though it’s still a bit shy of his personal best from Winter Nationals.

In Paul Powers’ other individual event, the 100 back, he will get a much bigger challenge than it looks like will happen in the 100 free. Powers actually goes into that final as the second seed, behind sophomore Ethan Young from Dalton. Young broke the State Record in the 100 back in 47.85, which took another huge name off of the record books: former Marist swimmer Peter Marshall, who is now a World Record holder. Young has been half-a-second faster, but he’ll have some room to open-up in finals with Powers as the 2nd seed in 48.92, which is a full second back.

Another big name swimming at this meet is National Team member Gunnar Bentz. He took the top seed in the 100 fly in 48.60, but is just the 2nd seed in the 200 IM behind Colin Managhan 1:52.04-1:52.41. Bentz has been about 6 seconds better in that race, and has the potential to win it even if his season plan is looking largely beyond this meet.

Westminster’s Katie Christy is in a strong position to defend her state title in the 200 IM,  where she swam a 2:03.95 for the top seed coming out of prelims. The junior was also the state champion in the 100 breast in 2012, but in 2013 that title went to her sister Jamie, who is now a freshman at USC; this year, Katie will have a new challenger in that 100 breaststroke, as fellow junior Darby Wayner has the top seed in 1:04.53. Christy is 2nd in 1:04.70.

Metro’s prelims of the 500 free and 400 free relay are tonight. With the rest of the prelims and finals tomorrow. Ledecky is in the girls 500. Boys 500 will be deep, 5 guys have personal bests of 4:27 or faster, none are seniors. This includes Matthew Hirschberger who just moved here from florida and is competing for Georgetown Prep.

When you know you have Benjamin Ho and Thomas Anderson!
MIchael Andrew can swim backstroke as well.
And both 12-year-old phenoms Destin Lasco and Vinny Marciano who smash NAG records.

I have forgotten to say that Murphy and Conger are not very old.

You don’t have to worry for the future of US men’s backstroke.

It’s even a little indecent. 🙂

If this is the Georgia meet, why is Brett Ringgold in the background?