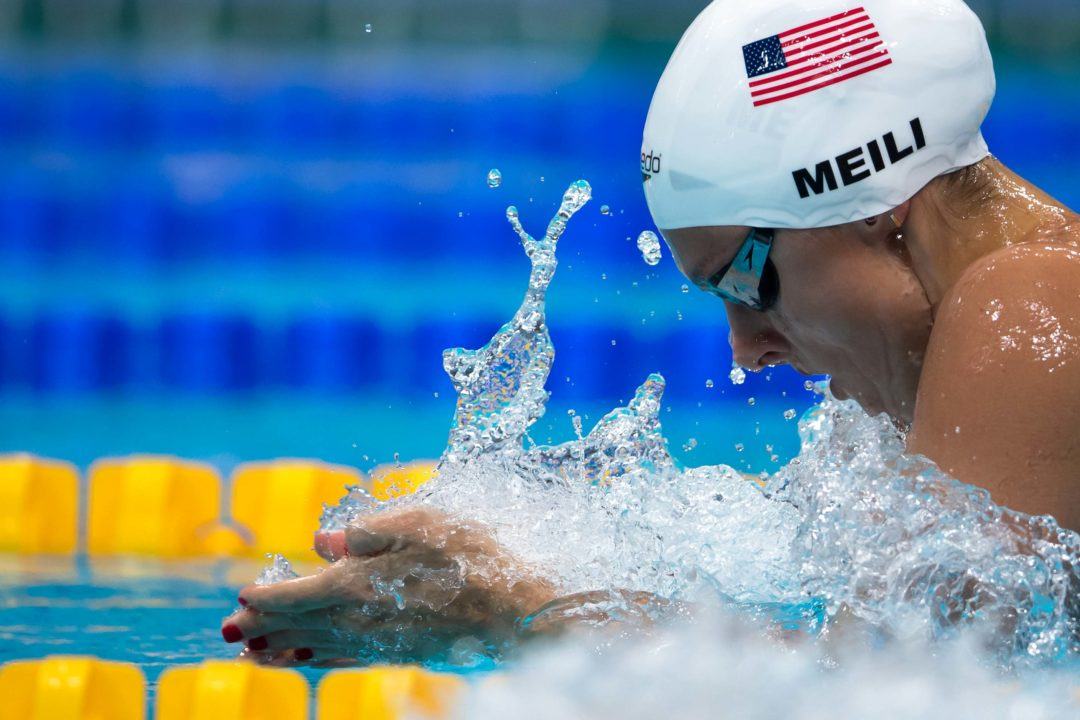 15 NCAA programs have had a current swimmer or alum win a medal within three days of Worlds, including Columbia's Katie Meili and Northwestern's Matt Grevers. Current photo via Mike Lewis/Ola Vista Photography

15 different NCAA programs have current swimmers or alums with a medal just three days into the 2017 World Championships, led by Stanford, which has 5 medals, all gold.

Katie Ledecky won her third medal of the meet (and her record-setting 12th medal overall) with an easy win in the 1500 free. That pushes Stanford to 5, one ahead of Auburn.

The current NCAA Cal-Texas rivalry keeps right on chugging, as both schools hit their third medal of the meet so far. Ryan Murphy took bronze and Kathleen Baker silver in their respective backstroke races, while Texas got its third medal from Townley Haas: silver in the 200 free. Those two schools sit tied for third overall with Louisville, which racked up 3 medals in the first two days, though none today.

Lilly King‘s win in the 100 breast puts Indiana at two medals, both gold, and a handful of new schools joined the list today – a few of them names you might not expect.

Northwestern (Matt Grevers) and Columbia (Katie Meili) now account for a pair of silvers, proving that talented swimmers can flourish outside of established NCAA contenders.

So far, we’re just tracking pool swimming, as that’s the only discipline in the NCAA. We’ll look into adding open water swimmers, perhaps at the end for the final numbers, though.

personally i would like to just see the top 4 on relay getting credit and not the alternates. you can boo me but i think a 4th place individually is more impressive than some guy just filling in for someone to give them one less swim. just how i feel.

How about a Club count too LOL

Frankly, that would be a more realistic account of the swimmers histories. Most of them were already quite good before they ever swam a yard in college. Murphy, Dressel (Bolles), Ledecky (Nations Capital) and Kathleen baker (Swim Mac). That’s about it for me,
I’m sure there is someone with more of a knowledge of the team’s club teams.