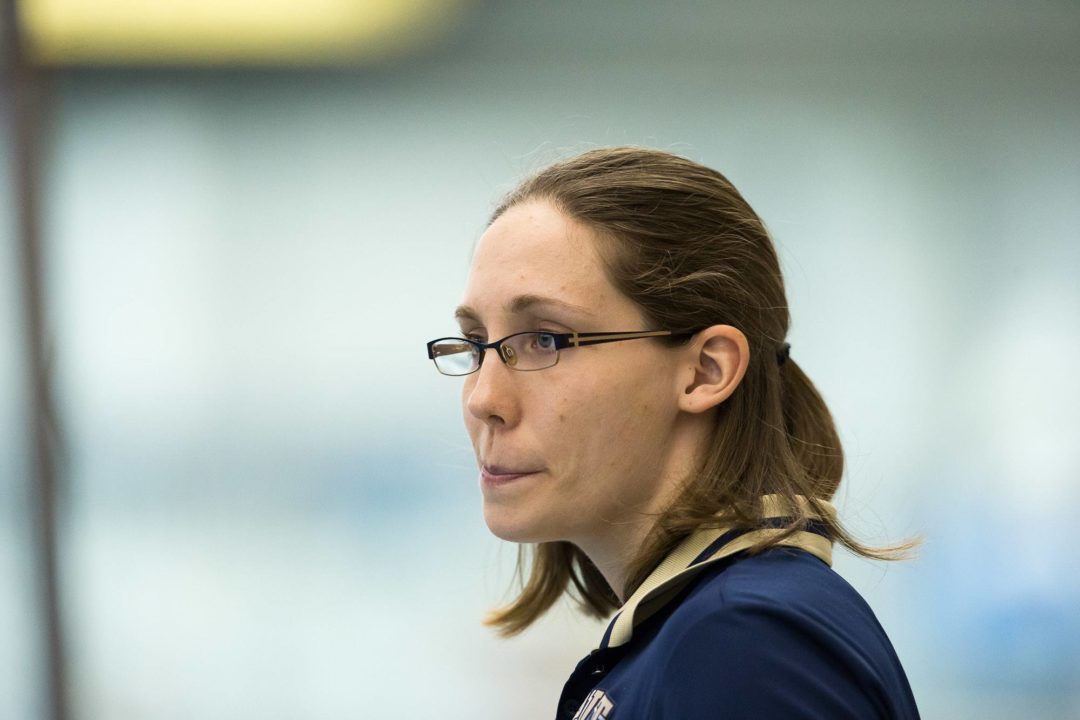 The University of Minnesota has announced the addition of former student-athlete Stacy Busack an associate head coach for the program. Archive photo via Tim Binning/TheSwimPictures.com

The University of Minnesota has announced the addition of former student-athlete Stacy Busack to the swim coaching staff as an associate head coach for the program.

Busack is one of two new hires this season under head coach Kelly Kremer, joining fellow associate coach head Mike Joyce. This follows the team’s loss of two Associate Head Coaches: Jesse Moore and Terry Ganley. Moore will be taking over the head coaching position at Dartmouth, while Ganley recently retired from coaching after 44 years.

Busack is extremely familiar with the Minnesota program, having competed as a member of the swimming and diving team from 2005-2009. During her time in Minneapolis, Busack was a 13-time All-American and 4-time Big 10 Champion for the Gophers. Busack also set 14 Minnesota school records during her career, including 5 that still stand, and was the former Big Ten Conference Record holder in the 100 freestyle (48.08).

Following her career at Minnesota, Busack remained with the team as a volunteer coach until 2013, when she took an assistant coaching position at the University of Pittsburgh. In 2016, Busack became an assistant at Oakland University, before being promoted to the Associate Head Coach position in 2019. During her tenure at Oakland, the team won both the men’s and women’s Horizon League Conference Championships titles for 5 years in a row.

“We are beyond excited to welcome Stacy back home to Minnesota,” said Kremer. “A Gopher through and through, she is an outstanding person and leader who will have a major positive impact on the lives of our student-athletes.”

“I am thrilled to come home to Minnesota and incredibly grateful to Coach Kremer and the athletic department for the opportunity to serve my Alma Mater and the Gopher student-athletes,” said Busack. “The ‘U’ has always held a special place in my heart and I am beyond excited to do my best to give back to the place that has given so much to me. Go Gophers!”

During the 2020-2021 season, Minnesota faced a shortened schedule due to COVID-19, only holding 4 dual meets. The women’s team finished with a 3-1 record and placed 6th overall at the Big Ten Championships. At the NCAA Championships, the Minnesota women finished 24th overall with a total of 40 points, all scored by NCAA Diver of the Year Sarah Bacon. The Minnesota men finished with a 1-2 record and placed 9th out of 10 teams at the Big Ten Championships. Like the women’s team, the men’s team also scored exactly 40 points at the NCAA Championships, all from junior Max McHugh, who won NCAA Titles in both breaststroke events.

Congratulations! Gophers are lucky to have you back 🙂
Go gophers!

Hopefully she can help right the sinking ship.
MN were perennial top 10 finishers at Men’s and Women’s NCAA’s and always competing for the BIG10 team title, when she was an athlete. The teams finished 6/9 in the BIG10 last year. Yikes. The men were 4th, and the women won the title in 2013 (Dennis’ last year, he was the men’s coach, but still worthy to note).
I wish her luck, as she’s incredibly accomplished and an extremely nice person, but it seems like there’s still one more old-head that needs to go….

Really like this hire! Hopefully coach Busack can breath some life into the stagnant sprint group on the men’s side, and develop a promising young women’s sprint group.

As an alumni, it feels good to finally have something to be excited about in this program (other than Max).

Gonna put the giddy up back into the Sprint groups! Nice hire 〽️