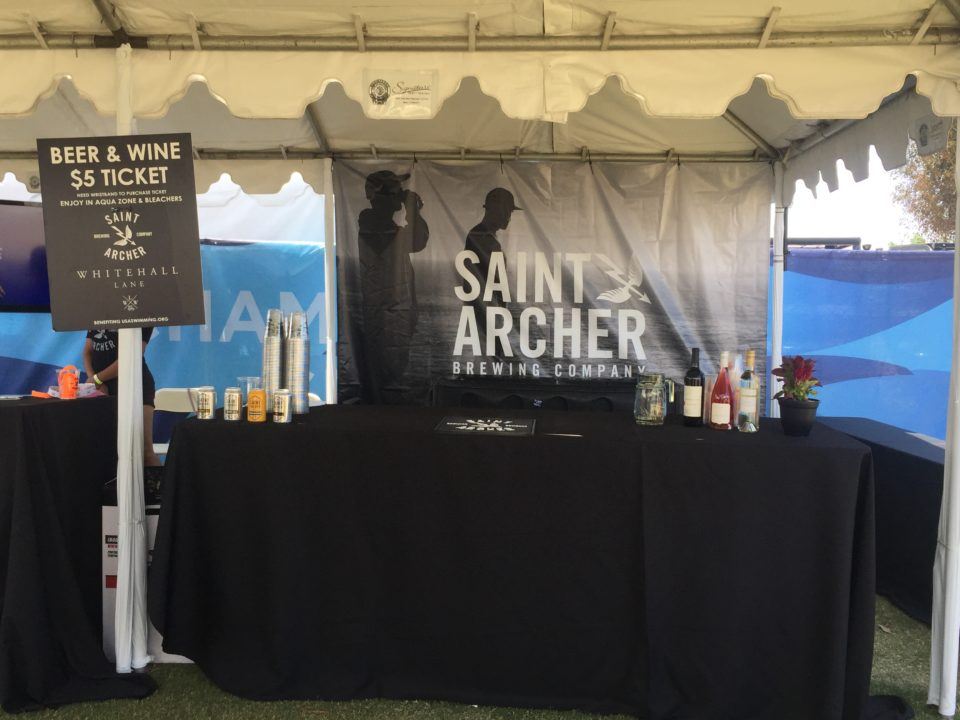 SwimSwam caught up with USA Swimming CMO Matt Farrell to find out how alcohol sales have gone at Nationals. Current photo via Torrey Hart/SwimSwam.com

When USA Swimming released in its Board of Directors meeting notes in March that the organization was planning to begin selling alcohol at senior-level meets, the idea was met with heavy criticism questioning the safety of athletes, and the type of culture that the sales might promote.

Regardless, USA Swimming went ahead with the plan and incorporated alcohol sales into the fan experience with a “beer garden” at the 2018 Phillips 66 National Championships. The garden is located well away from the pool, behind the grandstand, in the enclosed “Aqua Zone,” which features vendors, food trucks, and games. However, fans are allowed to bring their drinks into the spectator bleachers.

SwimSwam spoke with USA Swimming Chief Marketing Officer Matt Farrell to find out how the inaugural program has been going.

He noted that USA Swimming partnered with local brewery Saint Archer and Northern California winery Whitehall Lane for beverage options, and that both can be purchased in the garden and in the Speedo VIP Deck (of Kobe Bryant fame).

“Looking back to when this came out, that USA Swimming was looking into it, I think it took on a life of its own of this perception of some type of a big party atmosphere, and people started looking at things that maybe happen in other professional sports – it’s been the exact opposite,” Farrell told SwimSwam. He added that he would have liked the idea to have been presented more ceremoniously, rather than in the BoD notes, which led to people picturing “parents with their feet up drinking a margarita.”

When the plans were released, they detailed the involvement of the Alcohol, Tobacco, and Gambling Task Force in guiding the specifics of the program – both USA Swimming officials and athletes including Anthony Ervin were said to be involved. And from the outside looking in at the meet, one probably wouldn’t even notice that alcohol was being served – save a scattering of patrons with clear Saint Archer branded cups.

“This has been a very respectful crowd, casual crowd – it’s still a family crowd, and it’s rolled out about as well as we could have hoped,” Farrell said. “There have been zero security issues, there haven’t been any problems talking with the facility and event staff. It’s just been treated very responsibly by the event, the organizers and the people taking advantage of it.”

“It has worked extremely well,” he continued. “It has been a really casual environment, and really enjoyed by people, and the positive feedback has been overwhelming.” Farrell did not have sales numbers immediately available.

It does appear that this program will likely continue. Farrell said that USA Swimming is currently only looking at Pro Swim Series-level meets and up, including Winter Nationals, Nationals, and Olympic Trials; the organization has not yet considered any open water events.

Another aspect of involving alcohol in the fan experience might include company sponsorships. The original notes included suggested guidelines if such an opportunity arose, noting that alcohol-adjacent companies “primarily known for being a restaurant that serve(s) alcohol,” or if “alcohol, liquor, bar, pub, distillery, etc., is not directly referenced in the name of the establishment,” would not have restrictions if the guidelines were approved.

Besides USA Swimming, this would also allow teams to seek sponsorship, where companies fitting the above criteria could be promoted on team websites, in adult-targeted communications, adult-focused venues, and activities. However, Farrell said that no alcohol-related sponsorships are currently being planned.

“Those sponsorships [Saint Archer and Whitehall Lane] are just for this particular event,” he said. “There’s nothing in-the-works from a national perspective. And even if it was, that would be reserved for adult-focused events: at Trials, Nationals – those types of events. That would never penetrate down to the grassroots level and youth level.”

Awesome. I don’t get why everyone was flipping out, swim meet settings are very different than football games.

Yes, but Mickey Mouse and Minnie Mouse are better for the swimmers 12 to 14 at the nationals. I surprise they didn’t come down for the swimming meet from Disneyland. Booze is not that great for kids 12 to 14 unless its a dinner wine with their parents.

Who was “flipping out”?

Comments here are a good place to start:

There’s more (and much worse) on social media.

I guess I just have a different definition of “flipping out”.

With weed legal in Cali now they should include a smoking section. Never thought about it before but could increase the tension (personally) in races. And then maybe then USA swimming would be able to afford someone better than Rowdy as a commentator, or at least bribe him to stop.

Rowdy does not need replacing

minus for the rowdy comment, plus for the weed comment. The real rastafaris are in irviiiiiiine! check it!

Good point. Almost no Booze, no tobacco and no pot. I’m as clean as a whistle. I think kids don’t need bad habits since Booze, Pot, and Cigarettes do more harm to teens than adults.

Knew this would be a controversial comment, you lot always live up to my expectations 😘

NCAAs in 2018 is in ATX, and they sell beer in the football stadium so…

Now to find an independent brewery to partner with…

I’m a bit surprised that they didn’t choose to partner with Golden Road Brewing, founded by former Yale and Olympic Trials swimmer Meg Gill. But Golden Road isnow owned by Anheiser-Busch. Saint Archer is a faux craft brand owned by Miller-Coors. USA Swimming must have accepted sponsorship money from a Coors distributor or family of brands rather than Budweiser. Too bad, Meg should have made more of a push given her swimming ties.

My guess is that Meg Gill went to her superiors at Anheuser-Busch with the idea of sponsoring a national-level swim meet and they basically told her they want no part of a small-time operation like USA Swimming.

When will beer companies start sponsoring swimmers? Seems like a logical progression to me.

Most of the liquor was consumed by the Florida coaching staff, until Caeleb Dressel’s 100 fly.

So I was sitting poolside in the deck seating area and the place cleared out after the A/B finals and then I spot a guy holding a beer and standing at the barrier where the swimmers usually stand to cheer. I thought it was a coach at first but after closer look it was just a fan or parent. I got a good laugh out of it cause it was funny to see and actually should have snapped a pic of it as it would have made for a funny meme. Okay USA swimming, probably should ditch the clear plastic beer cups and I’m thinking allowing the alcohol ON THE POOL DECK is not a great idea.