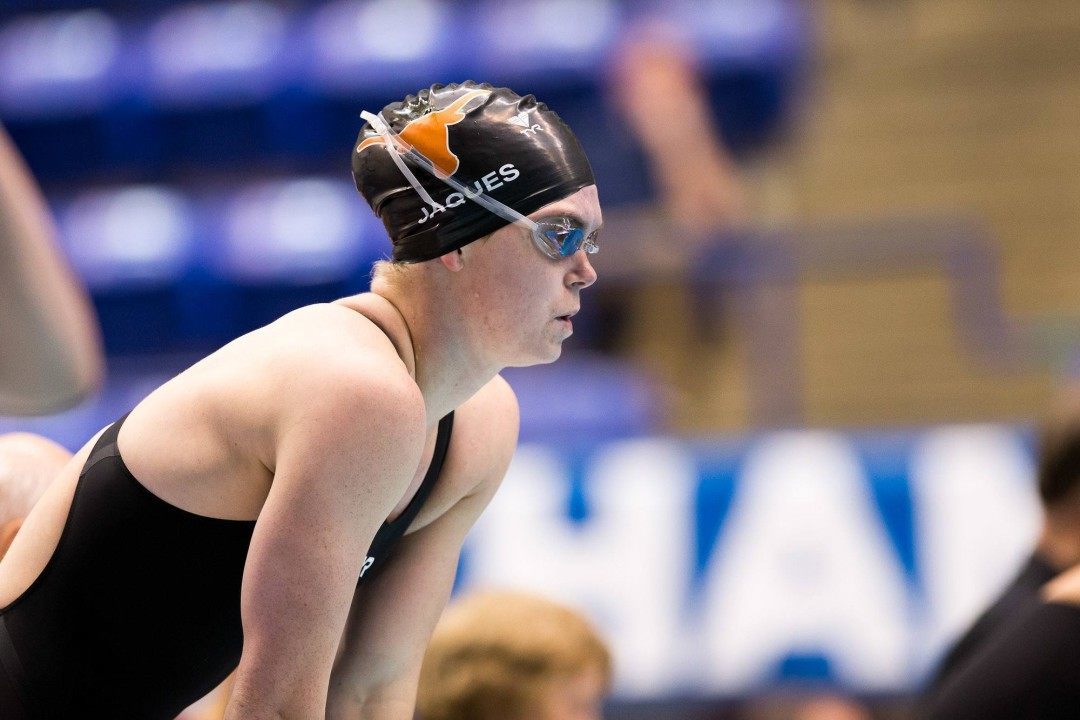 While all three teams had some good top-end swims on day 2 of the Texas-Arizona-SMU meet, the Longhorns’ depth sealed... Archive photo via Tim Binning/TheSwimPictures.com

While all three teams had some good top-end swims on day 2 of the Texas-Arizona-SMU meet, the Longhorns’ depth sealed the win in front of a home crowd.

Texas’ Gretchen Jaques continued her impressive meet with a 59.91 in the women’s 100 breaststroke to beat-out SMU’s Tara-Lynn Nicholas (1:00.91) by a full second.

That makes Jaques the first swimmer in the country to go under a minute in the event in 2015 so far. Jaques currently sits 2nd in the country overall this season, and if Texas’ success had to be pinned down to any one swimmer, it might be her. She also won the 200 breast (2:11.63) on Friday.

Arizona did get their share of wins on the day, however. Bonnie Brandon won the first individual event of the day in the 500 free with a 4:46.92, beating out Texas’ Kaitlin Pawlowicz (4:48.98).

That’s Brandon’s season-best in the 500, although she didn’t swim the race at Arizona’s mid-season taper meet in this same pool.

Her fellow senior Elizabeth Pepper also had a good swim for Arizona when she won the 200 fly handily in 1:59.07.

The SMU Mustangs didn’t have nearly the depth to hang with their top-10 opponents, but they turned some heads on Saturday when they won both relays and an individual event to boot.

In the session-opening 200 medley relay, SMU took the early lead thanks to a 24.81 backstroke leadoff from Isabella Arcila. Texas charged to the front after the breaststroke leg when their star Jaques split 27.81 versus Nicholas’ 28.65.

But SMU, with the defending third-place butterflier from NCAA’s last season, split 23.60 to make the race dead-even going into the finish.

For SMU, that meant they were handing off to their veteran anchor Nathalie Lindborg, who came through with a 22.41 versus Rebecca Millard’s 22.76 to give SMU the win.

Both the Longhorns (Jaques – 49.83) and Wildcats (Brandon – 49.80) had good leadoff legs, but Lindborg was able to stay just ahead of them leading off to give her teammate Arcila clean water for a great split on the 2nd leg.

This 400 free relay for SMU could be a top-8 relay at NCAA’s if they can find a quality 4th leg. Erasmus is likely the answer to that question – given that she was a 51.1 in the 100 fly at NCAA’s last season, she’s capable of a 49, especially on a relay start, at NCAA’s on this relay. If the Mustangs are able to score, even after graduating big names Monika Babok and Nina Rangelova following last season, it would be a big win for them in March.

But the glory of the team title belonged to the Longhorns. Besides Jaques’ swims, sophomore Madisyn Cox also had a good run. She was the only individual double winner on the day for any team, taking the 200 free in 1:46.37 and the 200 IM in 1:58.34. That 200 IM saw her win by more than six seconds ahead of Tasija Karosas.

The Texas women have one meet left against TCU next weekend and then will swim at the Big 12 Championships: both meets are in Austin. Arizona will race Arizona State on Saturday, while SMU has one dual meet left against North Texas on Friday.