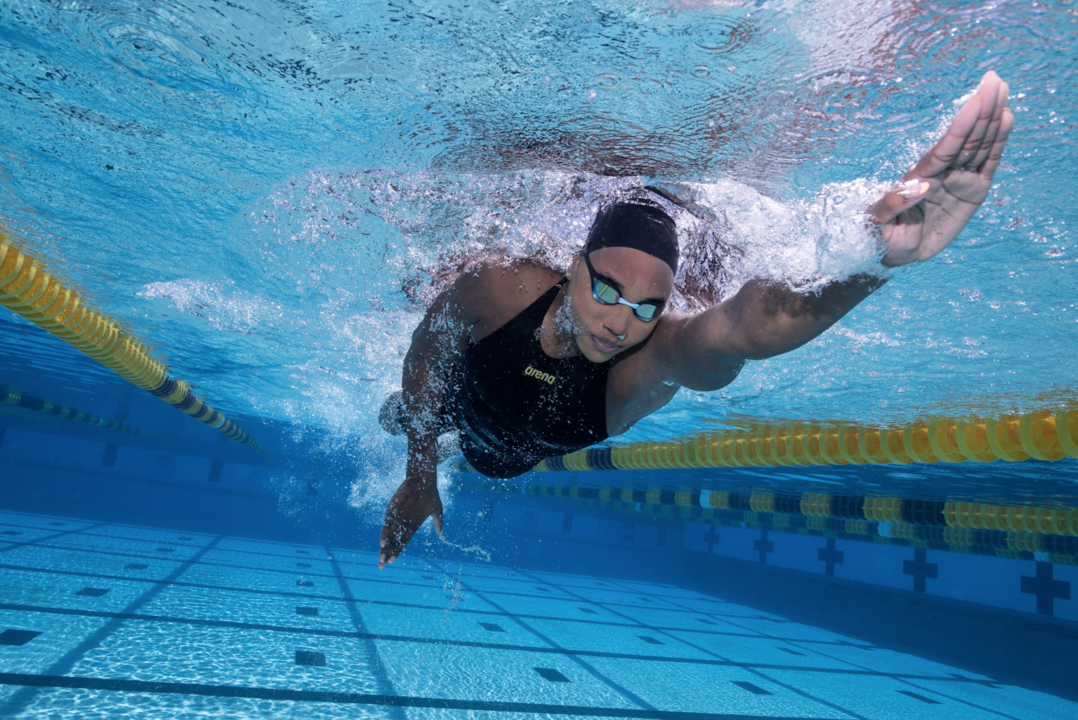 Simone Manuel will make her return to elite swimming next week, according to psych sheets for the Pro Swim Series stop in Knoxville, Tennessee.  Archive photo via courtesy arena

Kalisz says the depth of the ASU training group is immense so that if you’re not bringing your A-Game to workout, someone else will be nipping at your heels

Ryan Held Did Golden Goggles, Finished his Masters, and Got Married all in One Month

Olympic champion Ryan Held takes us through his whirlwind December (which actually started in November) with Golden Goggles in New York City.

A self-proclaimed long course swimmer, Curtiss said that sc worlds were a big learning curve for him that helped his development as an elite athlete a lot.

Simone Manuel will make her return to elite swimming next week, according to recently released psych sheets for the Pro Swim Series stop in Knoxville, Tennessee.

Leading up to the Tokyo 2021 Olympics, Manuel was diagnosed with overtraining syndrome, a condition in which the training one is doing outpaces their body’s ability to recover. She dealt with depression, anxiety, and insomnia that spring before taking a break from competition last year. The 26-year-old American skipped last June’s World Championships after winning a female-record seven medals at the meet in 2019. It was her first time missing a major international meet since the London 2012 Olympics.

Not only will next week’s Pro Swim Series stop be Manuel’s first high-level meet since the Tokyo Olympics, but it will also represent her first race with stakes since moving to Arizona State to train with Bob Bowman’s all-star group of pros last August.

The 26-year-old Manuel is joined on the entry list by 22-year-old Canadian Penny Oleksiak, who is making a return of her own following meniscus surgery in late August. In an Instagram post, Oleksiak wrote that her recovery would probably “be the longest and most tentative one I’ve ever had to deal with.”

Manuel and Oleksiak will forever be linked in Olympic lore after tying for the gold medal in the 100-meter freestyle at the Rio 2016 Games. At last summer’s Tokyo Olympics, Oleksiak added three more medals to her collection, becoming the most decorated Canadian Olympian of all time with seven total.

In Tokyo, Manuel brought home bronze in the women’s 4×100 free relay, upping her career tally to five Olympic medals. She also currently holds the World Record in the women’s LCM 4×100 medley relay, where she blazed a blistering 51.86 anchor split.

Also making a long-awaited return is reigning 400 free Olympic champion Ahmed Hafnaoui of Tunisia, who is expected to swim for the first time since 2021 Short Course Worlds.

Last year’s Pro Swim Series stop in Knoxville was canceled due to COVID-19.

This year’s opening stop in Knoxville is the first of four on the Pro Swim Series. The tour wraps up with meets in Fort Lauderdale (Florida), Westmont (Illinois), and Mission Viejo (California).

From the 2022 World Aquatics Championship squad, the list of the most vulnerable female swimmers from USA Swimming is denoted below:

The list of the most likely potential replacements is denoted below:

W 100 FR – Everyone vulnerable besides Huske
W 200 BK – Both are vulnerable (their best times last year were separated by 0.05)

By the way, Championship Record.

Rhyan White posted a time of 2:06.96 in the final of the women’s 200 meter backstroke at the 2022 World Aquatics Championships.

Will be interesting to see what times are dropped, especially in women’s freestyle. I do expect the first serious worldwide times in 2023 will be at the NSW Open State Championships, as is tradition.

I had to do a double take. Katie Ledecky is going to attempt the W 200 FR – W 400 IM double on Day 2 of the competition? Make sure the paramedics are ready with the paddles.

Huh? She’s done this consistently at Pro Series meets for the last 5+ years…

Hell of a week to make that joke, man.

And even besides that, you can’t imagine a world where Katie Ledecky – KATIE LEDECKY – can swim a 200 free and a 400 IM back to back?

” Manuel was diagnosed with overtraining syndrome, a condition in which the training one is doing outpaces their body’s ability to recover”
Coach Meehan has never mentioned that Manuel’s training load was increased significantly. He never even said that it was increased at all compare to her regular training exercises at the beginning of the season. So if this OTS diagnosis is true indeed then there was some other reason why Manuel wasn’t able to recover after regular training session. So unable that even short break in training or slowing it down didn’t help.
What was the cause of this sudden conditions we will probably never know.

She had pool access pretty much the whole way through the pandemic but no taper meets in 2020 when she usually has at least one every year so maybe the lack of taper meets contributed.

Everyone was dealing with elevated levels of general stress in 2020 as well. If cortisol levels are way higher than normal, then what was a good training load for you could become more than you can handle.

Manuel was training with Ledecky on the 100m (get Katie faster) + 200m (get Simone faster), I imagine that working with Katie could be a very intense experience. Don’t know if this was the cause, but putting two very competitive Olympic Gold medalist in the same pool every day, where they naturally tried to push each other…

As for the traditional events in her wheelhouse:

There is a chance that if all goes well, USA wins the 4×100 Free Relay.

Canada has Rebecca Smith, the same Rebecca Smith who outsplit every American in the women’s 4 x 200 meter freestyle relay at the 2022 Short Course World Championships.

At least Canada has options in the women’s 4 x 100 meter freestyle relay.

Check the 4×100 medley anchor. If Huske hadn’t died coming into the wall she’d have probably gone 52.3 with a better RT.

It’s a BIG if whether Manuel and Weitzeil can turn back the clock.

That’d be a formidable relay but I would think it’ll take longer for Manuel to get back to splitting 51s. For comparison Australia with just splits from this year:

It’s very unlikely this would happen though because always at least one leg is a bit off.

Heemskerk did her fastest relay split at 33. Madi Wilson at 28. Emma McKeon at 27. There’s no reason Weitzeil can’t improve at her age.

Heemskerk did not burn out unlike SImone Manuel (OTS).

Besides, none of MacNeil, Oleksiak, Ruck, Smith are over the age of 22.

And I don’t know when they may choose to surface again, but to my understanding the three members of the Aussie WR group aside from McKeon have not yet retired — Cate Campbell, Bronte Campbell and Meg Harris.

First Australia would have to go slower than their WR of 3:29.69.

USA could not even beat Australia in the women’s 4 x 100 meter freestyle relay at the 2022 Short Course World Swimming Championships even without the Campbell sisters.

Let’s hope Simone Manuel has at least made significant strides in the women’s 50 meter freestyle.

Didn’t she win trials in the 50 about 1.5 yrs ago? How about, let’s hope everyone else has made strides in the 50 and start pushing for some podium finishes

Interesting that despite the names of Manuel and Oleksiak are in the title of this article there is no discussion about those swimmers in comment section. Looks like the Swimswam and its readers are not on the same page with expectations about swimming veterans.
Surprisingly there are so much talks about Sims. This swimmer is a very good addition to the USA team but there is nothing about her that predicts a break through to the elite level in any multiple events she is good at.
Claire Weinstein, the youngest member of record setting 800FR relay that is who should draw the most attention. She is indeed was very young then, just 15 years old. Any predictions about… Read more »

You’re just like the Aussie color commentator at the 2022 Short Course World Swimming Championships, dissing the Americans every step of the way.

It’s gonna be interesting to see both Manuel and C1 return to swimming this year after lengthy breaks. You’d have to think Manuel will be targetting a spot on the worlds team if she’s back swimming pro swim series meets but who knows when C1 is planning to make her return.

Weinstein(DOB 3-1-07) is excellent, but Sims (DOB 5-25-05) at this stage is SUBSTANTIALLY better overall. But as much as you might not want to do so, to get the overall picture you need to look at not just LCM but at SCM and SCY also, including relay swims. Weinstein and Sims are on the same club team (LV Sandpipers), along with another young star, Katie Grimes (Budapest ’22 Silvers in 400 IM and 1500; 4th in Tokyo 800) and commonly attend the same meets making it easy to compare them.

Who can withstand this avalanche of data?! I’m impressed. But you missed my point that wasn’t probably presented clearly. The fact that Sims’ progress curve looks good is obvious. How far will it go? Opinions are different and this meet next week won’t most likely give the answer to this question.
The situation with Weinstein is different and a very little predictions you can find about her. But at the age of 15 she represented USA in individual race at World Championships and as the member of relay team won gold medal with record time. It basically could be a career goal achievement for many swimmers. But where it will go further I have no clue. Therefore any of… Read more »