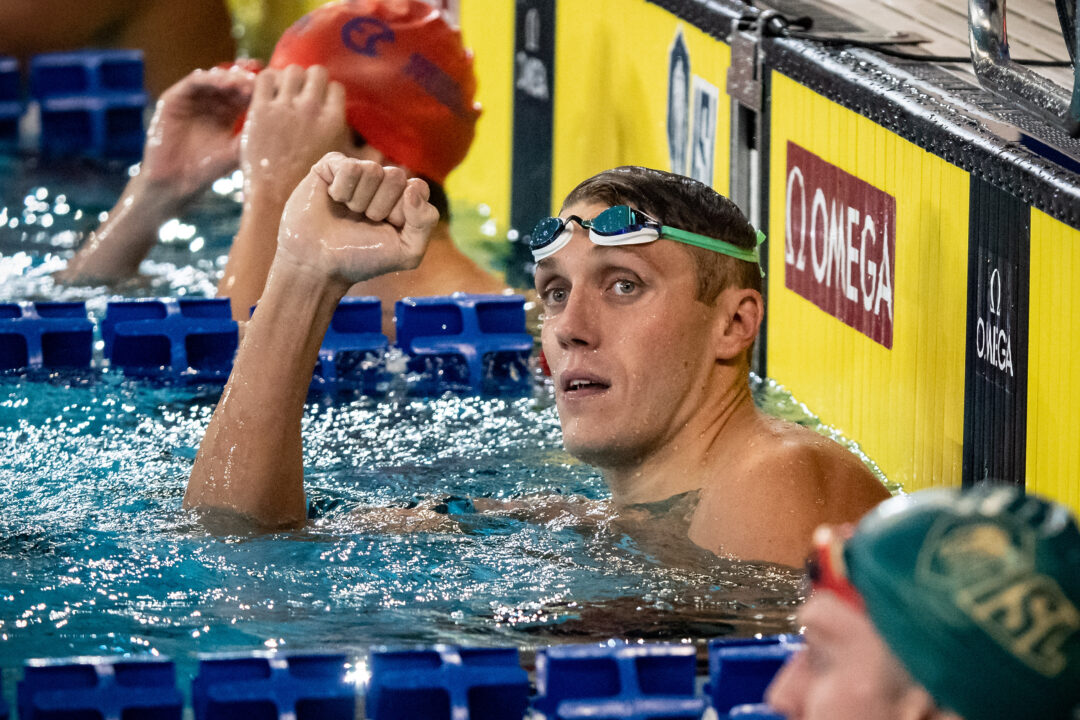 The men's 100m breaststroke semi-final saw a near World Record go down, as Ilya Shymanovich clocked a mark just .11 outside of it this evening. Archive photo via Giorgio Scala / Deepbluemedia / Insidefoto

This men’s 100m breaststroke semi-final saw a near World Record go down, as Ilya Shymanovich clocked a mark just .11 outside of it this evening.

Shymanovich of Belarus hit the wall in a massive 55.45 to claim the men’s 1breast top-seed, well within striking distance of his own WR time of 55.34 logged in December of 2020.

For Kammigna’s part, the 26-year-old just tied the fastest time of his career, matching the same 55.82 result he posted just last week at the final stop of the FINA World Cup Series in this same city.

Going back to Shymanovich, the 27-year-old Belarusian’s time tonight checks in as the 3rd fastest performance ever, sitting only behind his own aforementioned World Record and British Olympic champion Adam Peaty’s time of 55.41 also from 2020.

We’ll see what Shymanovich and others have in store come tomorrow night’s final here in Kazan.

This men’s 100m breaststroke was one of our top 5 men’s races to watch at these Championships, with SwimSwam having put the World Record on notice.

It’s important to note that Shymanovich has been called out by his peers for alleged dolphin kicking in the course of his breaststroke, as pointed out by then-London Roar coach Mel Marshall late last year.

In January of this year, Shymanovich addressed these allegations, telling SwimSwam, “People say that I have a very narrow kick and some of them consider it to be illegal, but it doesn’t break any FINA rules.”

On the topic of breaststroke,

1) I hope we see a sub 25 second 50 split soon, martinienghi was close today with a 25.1 and there are others who are arguably slightly better at the 50 than him

2) kammingas second 50 today was 29.17, is that the fastest backhalf of all time??
Also, this is so insanely fast that I believe he has the potential to go sub 55, let’s hope he will do it too

If people are angry about his “illegal” kick, they can make the effort themselves and go straight to fina and make them change the rules.

That is a shame, I’m studying medicine and don’t have the time either

Yet you’re here as the first post out of the gate on SwimSwam, a noted medical education resource.

The other guy replied minutes after on SwimSwam, a noted mechanical engineering resource

Is that you, Ilya?

Don’t think he’s Japanese or from the uk