Shouts from the Stands: The Story Behind the Coach

Working full time with these kids makes me realize how much they feel like family to me. Their struggles have also become mine. Current photo via Jack Spitser/Spitser Photography

This “Shouts from the Stands” submission comes from Bryce Carpenter, a coach at Chugiak Aquatics Club in Anchorage, Alaska.

For many years of my life I spent hours everyday staring at a black line at the bottom of a pool in Anchorage, Alaska. Licked my goggles to get rid of the fog for the next 100, and pushed my mind and body past what I believed to be possible. As the years went on and as the times dropped, I looked towards the future and the goal of swimming collegiately. Entering my junior year of high school I had set myself up well to be recognized by many schools and even having the privilege of being offered partial scholarships to several. When senior year came around the corner I was left to two options. Leave Alaska, for the schools within the state had no mens teams, and pursue my goal of becoming a better swimmer OR stay in state where tuition was much cheaper and closer to home. I decided to stay in Alaska and just like that my swimming career was done. For a moment I was lost. I am sure if you are taking the time to read this then you can attest to the fact that being a swimmer is a full time job. It becomes a part of you and you become a part of it. I spent some time away from the water and then, one day, made the best decision of my life. I showed up to volunteer as an assistant for my old high schools swim team.

Before I continue further let me just say this, while Alaska is all the way up north and even though we ride polar bears and live in igloos, this state produces some incredibly fast swimmers. Each year we send dozens of kids out of state to swim collegiately. Even as I type this there is a fifteen year old representing our great state down at Phillips 66 Nats and one of my swimmers prepping for the 2020 trials. But I digress.

I got into coaching purely because I missed the sport. Due to class schedules I was only able to attend 3 days a week and, since I was an assistant, I worked primarily with the breastrokers. If only I knew what I was getting into. At the young age of 19 I was basically another kid there. While my input was taken into consideration, it was never really taken as a “coaches” input. But I still could not get enough of the job. Seeing the reaction of the swimmers after touching that pad and seeing a best time was too much to turn away. I stuck with it. Now, here three years later I can tell you that no mistake was made in becoming a coach. I now work full time as an assistant coach at Chugiak Aquatics Club where I have met some of the most outstanding kids ever. Working full time with these kids makes me realize how much they feel like family to me. Their struggles have also become mine. When they struggle in school or in the pool or with life in general, I share that pain with them. Writing the practices and breaking down stroke video I always keep one goal in mind. Setting up my kids for success. I never saw myself getting this attached but I make it a constant effort to put my all into this program for the kids to hopefully move on in life with better preparation and courage to tackle any obstacle presented to them.

Yes, this story has been summed around a small no name coach all the way in Alaska. But there is a purpose to it. When you go to practice and you push yourself KNOW that you have people who believe in you. We coach for a reason, because we want to see the success in each and everyone one of our swimmers. Take note that there is always a story behind a swimmer; but also don’t forget about the story behind the coach. 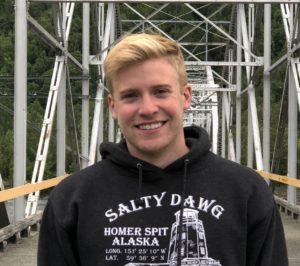 My name is Bryce Carpenter and I am a coach for Chugiak Aquatics Club in Anchorage Alaska. I have been coaching for 4 years and have just recently succeeded in having a swimmer qualify for Olympic trials.

I’m impressed with your apparent enthusiasm and dedication.

There is the other story not yet told, may never be told, of the kid whose life has been greatly improved by this coach.