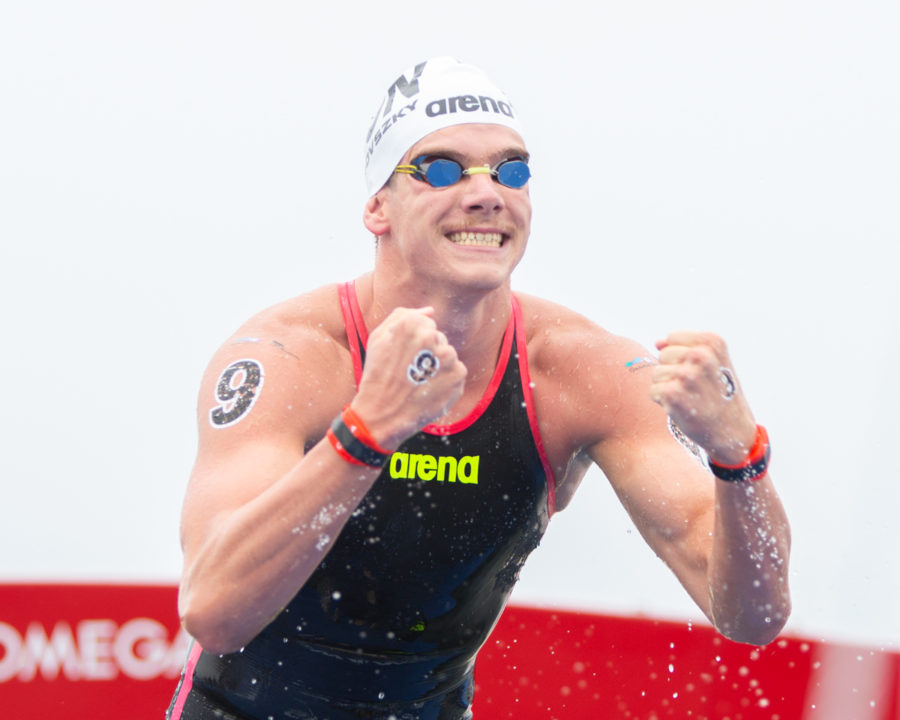 Kristof Rasovszky of Hungary, 22, made history on Saturday August 3 as he won his third consecutive race at the FINA/CNSG Marathon Swim World Series. Current photo via “Rafael/Domeyko Photography”

Kristof Rasovszky of Hungary, 22, made history on Saturday August 3 as he won his third consecutive race at the FINA/CNSG Marathon Swim World Series in Lac Megantic, Canada, becoming the first swimmer ever to win both Canadian legs since 2011, when the two cities joined the program of the Series.

Equally, Rasovszky is he first ever to win three back-to-back stages since Spyridon Gianniotis (GRE) won the first three races in 2012. In Lac Megantic he clocked a time of 2h06m46s30, claiming the gold at stake, while Dario Verani (ITA, 2h06m48s10) and Hau-Li Fan (CAN, 2h06m52s70) settled for silver and bronze. Rasovszky naturally leads the men’s ranking with 3700 points. Andreas Waschburger (GER) and Marcel Schouten (NED) follow him in the ranking with 1720 and 1634 points.

The two Italian swimmers Burni and Bridi currently lead the ranking in this order with 3750 and 3200 points respectively. World champion Ana Marcela Cunha of Brazil is third with 3100 points.

The Series next stops in Ohrid (MKD) on August 28 before heading to Asia with meets in Chinese Taipei on September 7 and in Chun’An (CHN) on September 29.

You can read a detailed race report on FINA website, results are available on FINA mobile app and FINA website.

Medalists in Lac Megantic (CAN):