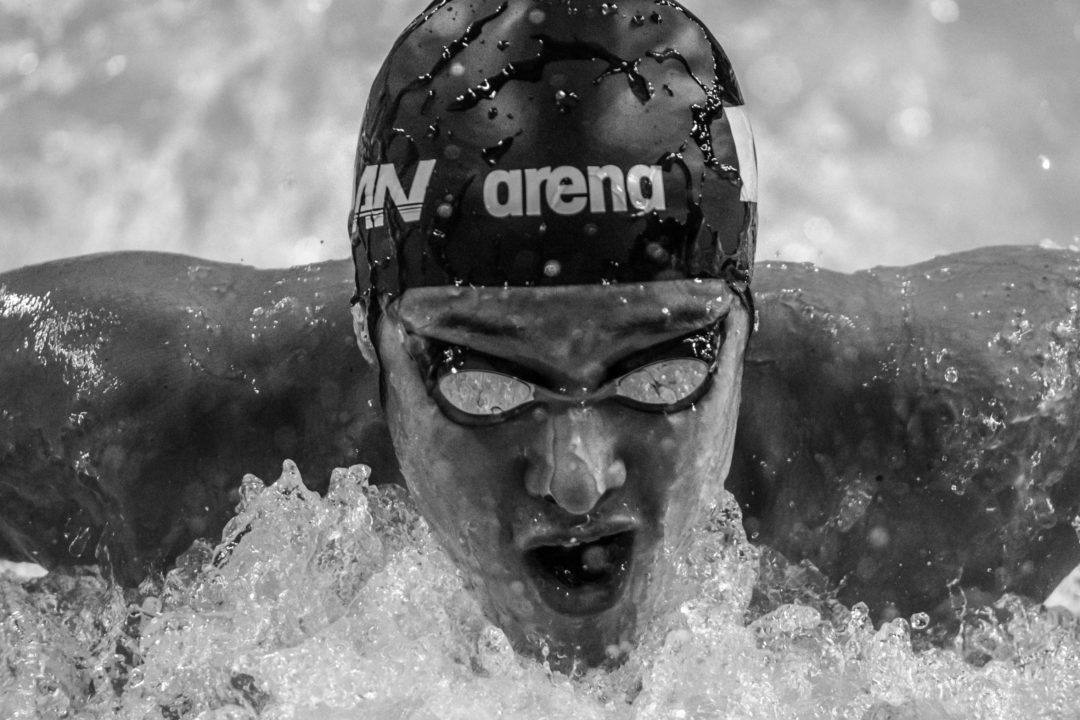 Yesterday Hungary's David Verraszto crushed a time of 4:07.47 to take the men's 400m IM, but Japan's Daiya Seto had other plans for the sprint IM tonight in Rome. Archive photo via Mike Lewis/Ola Vista Photography

More meet records fell on the final day of the 54th Sette Colli International Swim Meet in Rome, Italy today. Yesterday spectators were treated to a thrilling 400m IM duel between winner David Verraszto of Hungary and Daiya Seto of Japan and the two titans brought the same heat to the pool tonight in the sprint IM.

Neither Verraszto nor Seto took on the 200m IM as part of their Olympic schedules, but they posted world-class times tonight that would have landed them in or near the final. Seto led tonight wire-to-wire, splitting 25.23/29.81/33.75/28.75 for a quick final mark of 1:57.54 for the gold. That overtook the previous Sette Colli meet record of 1:57.94 held by Brazil’s Thiago Pereira since 2012.

Verraszto couldn’t quite match the back-end speed of Seto, as he finished well over a second behind in 1:59.25. That still checks-in as the Hungarian’s fastest of the season, while Seto nailed a wicked-fast 1:56.90 last fall that remains as the 4th fastest in the world before U.S. Trials. Bronze tonight went to Thiago Simon of Brazil, who notched a time of 1:59.99 to represent the other finalist to crack the 2-minute barrier in the race.

Siobhan-Marie O’Connor was impressive as well in the women’s version of the 200m IM race, taking the win in a new meet record time of 2:10.01. That surpassed her 2:11.08 outing from the Mare Nostrum Monaco stop and rockets the British Olympic silver medalist into 5th place in the world rankings. Splits for the Brit include 27.74/32.82/37.98/31.47. Remarkably, the old meet record which SMOC overtook tonight was held by successful Australian IMer Stephanie Rice, who held the 2:11.34 mark since way back in 2008.

Silver in the women’s 200 IM tonight went to Switzerland’s Maria Ugolkova, who nailed a runner-up time of 2:11.41. That’s quick enough to check-in as a new national record, beating her own time of 2:12.88 at this very same meet last year. Australia got on the podium, courtesy of Kotuku Ngawati, who finished in 2:12.18 for bronze. British Olympian Hannah Miley won the B-Final in 2:13.03.

Olympic champion Pernille Blume topped the podium tonight in the women’s splash n’ dash, taking the event in a new meet record time of 24.13. That outperformed the 24.21 meet record held by tonight’s silver medalist, Ranomi Kromowidjojo, who notched 24.21 back in 2012. Tonight, Kromo fired off a still solid 24.39 for silver, while Dutch sprinter Tamara Van Vilet scored a bronze with her 25.04 outing.

Blume’s result tonight checks-in as the Dane’s fastest of the season by .01, surpassing her 24.14 clocked at the Danish Open. Kromo has been a tenth faster at the Mare Nostrum Barcelona, holding the world’s 3rd fastest performance this season in 24.29.

Ukraine’s Andrii Govorov brought the heat in the men’s 50m butterfly, topping the field in a fierce 23.01, a new meet record. That overtook the 23.09 he notched just this morning and skims past the 23.05 he earned at Canet. Brazilian beast Nicholas Santos scored 23.08 for silver, while British speedster Ben Proud rounded out the podium with a time of 23.32.

Hungary scored the men’s 100m freestyle victory, thanks to a swift performance by winner Dominik Kozma. Kozma opened in 23.08 and wound up with a final time of 48.68 after leading the entire 100m, giving the 26-year-old a new personal best. Bruno Fratus of Brazil, who already won gold in the 50m distance earlier in the meet, settled for silver here in 48.75, just .02 ahead of Australian Olympian James Magnussen‘s 48.77.

Two other men were also sub-49 with Aussie Cameron McEvoy finishing in 48.92 for 4th and British swimmer Duncan Scott earning a mark of 48.93.

Apparently all the IMers got the memo that Phelps and Lochte are out.

I think Lochte’s times are going to keep dropping off a bit. You could see it last year at the olympics. And with the next wave of US athletes coming through I don’t even know if he’d make the team for pan pacs next year.

I don’t think that will be the case with Lochte because he has more balance in his life now with being a father. He’s also figured out that he can’t do it without Troy and the coaching group that got him to world prominence, so he splits his training time between California and Florida.

He had a groin injury… He needed a break after 2012 as well. Phelps took one, look at last year’s results. #TeamLochte

Ah yes, that old groin injury. Didn’t he swim about the same time that same year without the groin injury? Not sure how much that really affected him, they wouldn’t have kept him on the team for the relay if he had.

Phelps may have taken time off but his times weren’t dropping off, he was swimming strong before and strong after, so I don’t see how that’s relevant.

Phelps would not be in the shape he was last year if he had not taken time off. Burnouts are real. 4:12.66 400 im was shaved, but not tapered. If you are talking about the 200 im. He was still affected by the injury of course in training. It takes about a month to heal. I think Ryan will be in the best shape he has been since 2013.

Great 200IM from SMOC – Only a few tenths off her time from trials, where she was still clearly struggling after an extended break. I still want to see her swim a fully tapered, top shape 100br. Her 1.06.34 NR last year, 6wks before Olympics, was hugely impressive. She could go 1.05low imho – I hope she doubles 200im/100br in Tokyo.

Re SMOC, much may also revolve on how the other GBR “specialist” Breaststrokers progress over the next couple of years. If we start seeing 1.05s then that door may possibly close for her. Also the issue as to whether W BRS is less the problem for GBR that W fly ? Not necessarily disagreeing with you, Dee, but rather putting forth a counterargument; your thoughts ??

Nice surprise from Kozma, it was quite strong field.

New blood coming through 🙂
The missile was consistent though the series.
Kozma now has to find a second now to get on the podium at worlds.Good luck to him.

Indeed – Hungarians very fast very early across the board. Either they’re going to have a huge Worlds and drop massive chunks across the board, or they’ve got things very wrong.

I’m starting to think it’s more of the latter. You can’t put up these kinds of times without tapering. And I don’t know if they can pull off a double taper this close to worlds.

Surely they haven’t tapered unnecessarily a month from worlds…

Laszlo did for Euros last year. I’m not for one second buying that these guys are dropping times like this without tapering/resting.

Euros is another thing. It’s always important for Hungary. Sette Colli or similar races (before something) definitely not.

No taper at all.

How could I have forgotten That? Yes of course, and Cseh.

Never mind, I remember that 🙂

You think they are more rested/tapered than Americans are for this week’s Trials? If Americans do it for Trials and Worlds/Olympics, why can’t other swimmers rest and be good twice?

No they don’t match up at all but this might actually be a good sign for them. They (hopefully) haven’t rested too much yet and being slower and exhausted at the end of the meet would indicate that they have lots more room to rest and improve their already impressive 400 IM times.

I believe they are rested. 407 low is near impossible without a full taper. Seto is definitely better than his taper shape last year. Maybe I will be proved wrong if 4:06 or 4:05 doesn’t medal in Budapest. Wouldn’t that be crazy?!

Is this for me?

Yes… I will say however, that Cseh seems to be the favorite for worlds this year. MAYBE. Le Clos isn’t dead either.

You wrote untalented… Nobody said that.
Or Kenderesi.

I thought about that. As I remember I wrote László tapered a bit for the Europeans. He asked his coach (Zsolt Plagányi) to do that. As I said then and wrote here too, EC has been always important for Hungarian swimming. But before a big race no other meeting matters in general and e.g Sette Colli before Worlds especially at home makes no sense to taper.

It makes no sense to taper before OH. That is what I said before Rio and I was right. Phelps would never do that at his age.

You are right, but we live here and the EC means history to us. We made that e.g. before London too, othervise that EC was in Debrecen, Hungary so it’s a little bit different. Half of the elite swimmers or teams were missing then. But you can look e.g Germany. They did two different things with the same result before London and Rio, exactly zero. Phelps is unique, nobody is working like him. László needed that, the race and the time and we can see what happened. He was beaten by himself, it was a psychologic disaster nothing else.